By Sebastian Swiecznik: In front of 3000 people in Duesseldorf, Germany, undefeated young German middleweight prospect Sebastian Zbik (24-0-0, 9 KOs) fought out a lopsided decision against the tough Brasilian John Anderson Carvalho (18-3-1, 11 KOs). Zbik dictated the fight with his sharp jab and landed the cleaner shots throughout the whole twelve rounds. Nevertheless the game Brasilian deliverd a courageous performance and landed some nice right hands. Carvalho was always trying to lure Zbik into a slugfest, but the German had enough pop in his punches to keep his wild swinging contender at bay. The judges scored the bout 119:109, 120:108 and 119:109. 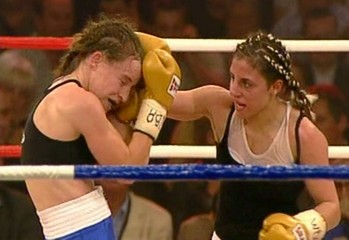 Before the fight Zbik told the audience that he is “ready for Sturm and Abraham”, and after his cool-headed performance last night, I can see him causing Sturm some problems. On the other hand I can’t see Zbik keeping Abraham or even Pavlik at distance, therefor his lack of power is to big. The German TV commentators brought John Duddy into play as a possible next opponent and I have to admit that I like this idea. Both guys are ranked #1 and #2 by the WBO and could determine Pavlik’s next mandatory challenger.

In the main event of the night the charismatic Susi Kentikian defended her title against the uncomfortable Hagar Shmoulefeld Finer. In a fight, that looked like a bar room brawl for the most of the time, the Israeli contender started fast and pushed Kentikian on her backfoot. In the mid rounds the WIBF and WBA flyweight champion took over the bout and landed the better shots until the end of the fight. The judges scored the bout 97:93, 98:92 and 99:91 for the champion. Although I think Kentikian deserved the victory the scores were way to clear.