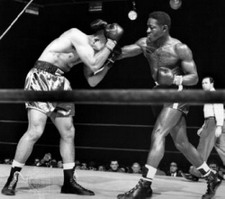 By Ted Sares – Boxing is a tight-knit fraternity. Everybody knows everybody. But a line in the resin will forever be drawn separating those who step into the square ring and those who DON’T. Many, many people make money on a fight, but when the bell sounds, only two people answer it. — Randy Smith, February 2003, Journal Inquirer – Manchester, CT

Some day, maybe, the public is going to abandon comparisons with Joe Louis and accept Ezzard Charles for what he was—the best fist-fighter of his particular time. –Red Smith

The late Ralph Dupas had 135 fights and many were against top level fighters. The same with Willie Pastrano whose opponents had an astounding combined won-loss record. There were (or are) others who would fight anyone put in front of them. There were guys like Beau Jack, Aldo Minelli, Chico Vejar, Holly Mims, Yama Bahama, Kenny Lane, Tony Licata, Vito Antuofermo, Tommy Tibbs (who participated in 139 bouts), and Johnny Cesario.

And still more like Guts Ishimatsu, Frank Minton, Jorge Paez (who may be mounting an ill-advised comeback), James Martinez, Ray “Sucre” Oliveira, Ben Tackie and Julio Cesar Gonzalez (who recently was stopped for the first time in his career by Tavoris Cloud).

However, if forced to pick just one boxer who fought the very highest level of competition, it would be difficult not to choose the great “Cincinnati Cobra,” Ezzard Mack Charles.

Charles was a 1939 Chicago Golden Gloves Champion and National AAU titleholder (reportedly his amateur record was 42-0) who turned pro the following year and fought until 1959 finishing with a record of 90-25-1 (58 KOs). But it’s not so much his record that stands out as it was his opponents. For example, in 1954 alone, he fought Rocky Marciano twice–grueling fights that arguably “ruined” him (after the first fight, referee Ruby Goldstein said he did not have to say “Break” at any time during the bout). He iced both bomber Bob Satterfield and Coley Wallace, lost two decisions to Harlod Johnson (41-5) and Nino Valdes, and beat Billy Gilliam, Rex Layne, Tommy Harrison (of’ “Resurrecting the Champ” fame) and rugged Wes Bascom. The following year, he fought teak-tough Charley Norkus and Tommy “Hurricane “Jackson (twic).

But the Cincinnati Cobra did his best work prior to 1952. He beat Joe Maxim five times (in all, they fought 62 rounds), Layne, Jersey Joe Walcott twice, mean Lee Oma, Nick “The Fighting Marine” Barone, Joe Louis (yes, that Joe Louis), Freddie Beshore (in a classic), Gus Lesnevitch (member of the WBHF), Archie Moore thrice (88-13-8 coming in), and the great Jimmy Bivins twice.

Charles won his first fourteen out of the professonal gate but then lost to Ken Overlin (120-19-6) in 1941. He later drew with Overlin who finished with a record of 133-19-9. After losing to the very capable Kid Tunero (75-23-12) in 1942, he beat legendary Charley Burley (52-6-1) in back-to-back fights. Among other subsequent victims was Lloyd Marshall (59-13-3) twice. Marshall was no slouch, and defeated eight fighters who held World Titles. While he lost to Charles twice, he did KO him in 1943 decking him eight times in the process.

In 1948, The Cobra knocked out Sam Baroudi and avenged his “defeat” to Ray by icing him in Chicago. Baroudi died from injuries sustained in his bout with Charles at the Chicago Sadium. Many savvy boxing observers later thought that the devastated Charles had become overly cautious afterwards– even to the point of trying not to hurt his opponents.Where previously, the slick Cobra was a ultra-dangerous fighting machine who had a complete tool chest of skills, he now appeared to have lost much of his venom and desire.

Toward his career end, he lost seven of his last nine bouts, but still fought top opposition including Harry “Kid” Matthews (88-7-6), Donnie Fleeman (24-2), and Pat McMurtry (20-0-1). Like many greats who hang on too long, he faded into obscurity, especially after his last draining fight against Marciano. And from 1955 until his retirement in 1959, he fought twenty four times, winning only ten which, of course, diluted his legacy insofar as his record was concerned, but nothing can ever dilute the following encapsulation:

Many lesser known but highly skilled fighters who did their work during this period faced racial barriers in boxing, and some, like Marshall, peaked while the titles were frozen during World War Two. Still, names like Moore, Burley and Bivins are mentioned in conversations reserved only for the legendary, and when you add Marciano, Walcott, and Joe Louis into the mix, well, maybe “legendary” becomes “immortal.”

Ezzard Mack Charles died in 1975 from (ALS) also known as Lou Gerhig’s Disease at 53, In1976, Cincinnati honored him by changing the name of Lincoln Park Drive to Ezzard Charles Drive. This was the street of his residence during the height of his career. He was elected to the International Boxing Hall of Fame in 1990 and his enshrinee page states, in part:

“Charles finally won the vacant NBA heavyweight title by defeating Jersey Joe Walcott in 1949. He earned worldwide recognition as heavyweight king the next year by decisioning an aged Joe Louis. After three successful defenses of the undisputed crown, he lost the title in a third battle with Walcott.

“After Walcott lost to Rocky Marciano, Charles challenged the Rock in two unforgettable fights. The first time Marciano retained the title on a close decision and, two months later, stopped Charles in the eighth round of a fight that was nearly stopped because Marciano’s nose was split open.”

Charles was inducted into the World Boxing Hall of Fame in 1983.

The Cincinnati Cobra was indeed a very tough customer; maybe the toughest ever. While he was too early for television to fully depict his greatness, this noble fighting machine made enough appearances in Chicago for me to know what he was all about.

Watch for the author’s new book, Reelin’ in the Years: Boxing and More” due out in October.