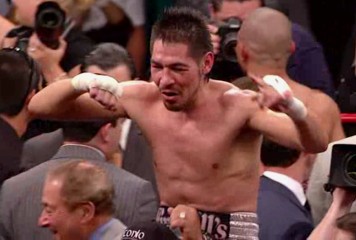 By Michael Klimes: What can I say about the most anticipated fight of the year, which was one of the rare classics that exceeded expectations and defied most pundits’ predictions? Unfortunately, not much, but I may as well try without skidding into a cliché as I write from a summer house in Sweden where a person returns from exhilaration to consider previous events in tranquillity. I was stranded in Stockholm for the weekend that is not a bad place to be with its galleries, architecture and long legged blond beauties.

I wonder if they outdo the showgirls or ring girls in Las Vegas? I will have to satisfy my curiosity in the future. To my humiliation, I could not find a bar that showed the fight so I experienced the delayed elation of seeing Antonio Margarito’s victory over Miguel Cotto. I read about the result on the internet before I saw the fight. Oh well…the wait was worth it. Margarito put his middle finger up to me as I voted for the wrong guy.

A pattern of strategy was firmly established from the opening bell. Cotto was the man leading the dance and Margarito was his tango partner more than happy to follow his lead. Cotto demonstrated his skills beautifully swaying from side to side, slipping and sliding, shooting from a variety of angles, creating a tapestry of punches as he went from the head to the body. He followed a distinct rhythm, circling from side to side, placing his feet and then letting off two, three or four punch bursts and then dancing again. Margarito was his usual self and took every punch with a gruelling efficiency. He gave the impression it was a normal day at the office, not the defining bout of his career.

Cotto, however, was a little worried between the break of round two and three. There was a slight fog in his eyes as he started to acknowledge the rock in front of him. The British historian A.J.P Taylor described the incumbent Liberal Prime Minister Asquith during the Great War (I am paraphrasing) as being “a rock and like a rock incapable of movement.” That succinct observation can be applied to Margarito except he was a rock that was very mobile. His ability to cut off the ring issued Miguel Cotto with an ultimatum he could only delay by jabbing and falling back.

It started to grate me that many boxing analysts before and during the fight called Antonio Margarito a “one dimensional fighter”. There is a method to any tornado, especially a Mexican tornado. When A.J. Liebling was acquainting himself with the crudeness of Rocky Marciano, he sensed an intellect or even genius in Marciano’s style. The same was true as Ali steadily dismantled George Foreman in Zaire. It gradually became transparent to Norman Mailer and George Plimpton that something mystical was happening. I cannot help but apply the same standard to Margarito. He is brilliant at making others underestimate him. His slowness and ugliness disguise the fact that he is deceptively quick, both in hand and foot speed. His toughness hides the potency of his offence that is brutal body punching which is the equal of Cotto’s.

Sadly for Puerto Rican fans, Cotto kept on showcasing his better skills yet they were not enough. He failed to pass the idea of effortlessness that I think was articulated by Fred Astaire, “If it does not look easy, you are not working hard enough.” The Puerto Rican was working extremely hard but perhaps Margarito simply worked harder. He is the essential blue collar warrior and not the flashy Olympian.

The finest Puerto Rican fighter since Felix Trinidad could not outgun the more than sturdy Antonio Margarito. It was poignant to see their camaraderie at the end of the fight reminding their supporters of a kinship which can exist across the deepest national boundaries. Boxing is a lonely place for its participants but that does not mean it has to be a hateful environment.

What will happen to them now, hopefully a deserved break from the ring? The Cotto express has been temporarily derailed but he should have enough steam to return at breakneck speed. There was nothing disgraceful in his loss. He will be feeling an anguish only a fighter who has lost can understand. Margarito is experiencing a high that he has never had before as he has broken into the mainstream. It is time he lost the categorisation of an underdog. He has got to the top in the hardest fashion. He is from the lineage of Bernard Hopkins and Marvin Hagler. The welterweight division still has to establish an undisputed champion but that can wait for now, we have a moment to savour what happened, not speculate about what will.

Margarito and Cotto have instilled faith in me. So even though there have to be winners and losers in any sport, especially a profession as demanding as boxing; I hope I have been able to pay tribute that is due two serious fighters and the heritages they come from.

Next post: Antonio Margarito, The Ultimate Heartbreaker – Who Can Beat Him?