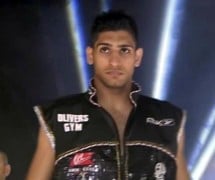 by James Slater: In a news story that has been reported on both Sky Sports and in The Bolton News, Amir Khan has split with his trainer Oliver Harrison. Khan has worked with the U.K’s Harrison from just before the end of his amateur career right up until the last of his seventeen pro wins. The split is amicable, and Khan apparently wants to remain good friends with Harrison.

Speaking to The Bolton News, an official spokesman issued the following statement: “It is nothing personal with Oliver and we hope to stay friends, but Amir needs to go up to the next level.”

Now that he is no longer working with Harrison, Khan is on the look out for a replacement coach. Apparently a number of American trainers are in the 21 year old’s sights. Experienced men Freddie Roach, Roger Mayweather and James “Buddy” McGirt Senior are currently top of Khan’s wish list, though nothing has been confirmed yet, as you would expect..

It will certainly be extremely interesting to see which one of those three Khan hires, if it is actually one of the talents listed. A Khan-Roger Mayweather team-up would be particularly fascinating. Amir has done will so far in his career, but would the added sparkle given him by a member of the outspoken and hugely confident Mayweather clan give the young star an added dimension? Khan has been accused by some of being too flash already, what could Mayweather possibly do but make him more so? This would not necessarily be a bad thing, however. Khan has the tools, it just may be that Roger Mayweather is the best man out there to teach him how to use them to the best, and most eye-catching, effect.

Whoever it is Khan hires, a world title shot looks on the cards for late this year. With a new, more experienced trainer working his corner (no disrespect to Oliver Harrison), maybe Khan’s chances of making it a successful shot will be even greater.

One possible concern does raise its head, though. Naseem Hamed, after leaving long-time trainer Brendan Ingle, very rapidly went down hill as a fighter. And although Khan has not been with Harrison as long as “The Prince” was with Ingle, the worry could be he follows the fighter he looks up to as a hero. It does happen – a fighter leaves the man he’s known for so long and has had success with, and then finds his new trainer and he do not get on as well as they had anticipated. Let’s hope this is not the case with the likeable and popular Amir Khan.