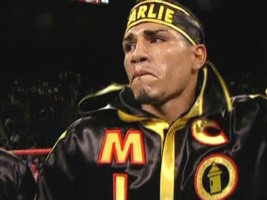 20.02.08 – By E. “G” Morales Febus: For those that don’t quite know, it lies in the Caribbean Sea, ‘only’ 95×35 miles wide with a population of just 3.7million and another 3.8million of its decedents worldwide. She is known as “La Isla Del Encanto (The Island Of Enchantment) or “La Perla Del Caribe” (The Pearl Of The Caribbean) amongst other synonyms that describe her beauty and attributes. AND… She is also known as La Tierra De Campeones or The Land Of Champions! Yes, I’m talking about Puerto Rico.

One might find it an extremely hard task to explain on how this Island so dimensionally small and relatively difficult to locate on your average world map has had and continues to produce their ‘Campeones’ at such an impressive rate. Most countries would welcome their championship “recipe”.. Other “championship starved” nations have actually sent as envoys their best trainers to Island gyms for a “look ‘n’ see” for themselves” in an effort to explain, dissect and sort out this “pugilistic” phenomenon.

With SEVEN of these at the same time! It’s also worth mentioning that this achievement was performed BEFORE the creation of the newer weight classes and BEFORE the WBO existed! Had they all been created back then… who knows how many MORE titles would’ve been conquered during that span by The Island Of Enchantment? Amazing? hmmm…  ‘AMAZING’ does pretty much adequately describe these impressive/outstanding accomplishments, doesn’t it? We all don’t have to agree but if not, how would you describe it? Do I sound biased or as though I am bragging? Biased? hmmm.. Yeah, maybe so. But ‘bragging’?? Well, actually I’m NOT. I’m just sitting in my fight library and proudly admiring the men that have given world wide boxing recognition to our humble Island.

Folks, I come from a long time boxing family of managers, fighters, trainers and even some small time promoting and I’m also proud of hundreds of non-Island fighters and trainers. But today my heart is proudly at home. Viva la Isla Del Encanto! Boxings Little Giant.

Next post: Echols a Different Story for Allan Green