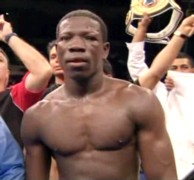 Edison Pantera Miranda has not had much to say about his former opponent Arthur Abraham in a long time. But in a recent interview he blasted him for not being a true champ. “Ever since I busted your jaw, you have fought nobody. But here you are bragging to the media about what solid opponents you’ve faced. Who are these guys? It is a joke that you never step it up like a true champion and fight a strong opponent.”

Abraham will be facing Elvin Ayala (18-2-1, 8 KO’s) for his next title defense in late March. Miranda had some choice words about this opponent as well. “I could only laugh when I saw his next hand picked opponent. Ayala is a guy that lost not once, but two times to David Banks, a guy that I sent through the ropes with one punch. To make matters worse he brings all these bums into his backyard – a place where the referee treats him like his own daughter. If he had any balls, he would fly his ass to America and fight m! e at a catch weight of 165. I’d destroy him!..”

Miranda, who is well known to face any opponent anywhere, has his eyes set on Canadian Jean Pascal, the WBO 2nd ranked fighter in the world, for a possible June 7th showdown in Montreal. Miranda spoke highly of Pascal acknowledging that Pascal’s unblemished record is not an accident. “Edison Miranda is a real fighter. I fight the best available that have the courage to step in the ring with me. If I need to go to Montreal to fight Pascal, then I will. P! ascal will be my fourth undefeated opponent in my last seven fights. He is not only highly ranked but has an impressive record of 21-0 with a strong amateur background. I could sit back and accumulate easy wins like Abraham, but I choose to fight strong opponents. It’s not only my job as a boxer to do this, but it’s what the fans want to see. I look forward to putting on a show for the 20,000 Canadian fans projected to come to this fight.”

Miranda (30-2, 26 KO’s) is currently ranked 4th in the WBC, 6th in the WBA, 7th in the IBF and 10th in the WBO and seems to be feeling much healthier and stronger after recently moving up to super middleweight. He has his eyes on fighting the best in the division. “I want to fight the best at super middleweight just like I did at middleweight. If he is ever man enough to fight me, I want to fight Taylor. He’s been avoiding me for years now. This is not only a fight that I want but all the fans want as well. After that, I’d love to get a rematch with Pavlik and show him what I’ve got at 168 when I am healthy. I will not only be champ at this weight class, but a champ who fights the very best – just like the old days.”