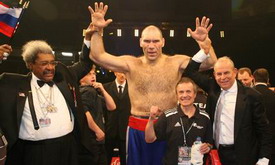 Just like the millions watching on TV, Wilfried Sauerland could not believe his eyes. “Not in my wildest dreams would I have expected something like that,” the manager enthused following the Russian Giant´s shut-out victory over highly-rated ex-champ Sergey Liakhovich. “He finally showed what he is capable of doing. That was the best Valuev ever.” In a WBA eliminator in Nurnberg, the biggest and tallest champion of all time jabbed his way to a unanimous decision against a quality opponent. Valuev won every single round on all three scorecards (120-108, 120-108, 120-107). “I am very pleased with my performance,” he said. “I really wanted the rematch with Chagaev. I am looking forward to it..”

Throughout the entire 12 rounds, Valuev (48-1, 34 KOs) showed great ring generalship, stamping his authority on the battle from the first bell on. He found range with his long left jab early and cleverly kept his opponent at bay. At the end of the second, Liakhovich (23-3, 14 KOs) found himself in deep trouble after being caught by a powerful combination. Soon his left eye was swollen as Valuev kept punishing him with jabs. “The training really paid off,” Valuev said. “I want to thank my coach Alexander Zimin. He has helped me to improve a lot. But I am not done yet and will still get better in the next fight.”

The pattern remained the same in the following, with Valuev comfortably jabbing and punching his way to his 48th victory (34 KOs). “You have to give him credit,” a badly-marked Liakhovich said. “There was nothing I could do against him.” The former WBO-champion was taken straight to hospital to receive treatment for a shoulder injury he picked up during the clash. He´s not the first Valuev victim that ended up in the emergency room. “Against Jameel McCline Nikolai showed the kneecap-busting-punch,” promoter Don King said. “Today he showed the shoulder-busting punch. He has just a great repertoire of shots. The spirit is back with him. He is incredibly strong and will be the new champion.”

Coach Alexander Zimin was full of praise for his fighter. “Nikolai did a very good job,” he said. “I believe the preparation was key. We changed some things and he adjusted well. I am pleased with his performance.” Next up for the Russian Giant is a rematch with WBA titlist Chagaev. “Niko lost the first bout very closely but if he fights like this he will win clearly,” Wilfried Sauerland said, while Valuev added: “I have to make amends for that loss. It was a great motivation in practice. I will keep working hard. Ruslan, I am looking forward to see you again in the ring.”

On the undercard, up-and-coming cruiserweight Alexander Frenkel (14-0, 10 KOs) scored a fifth-round TKO victory over former champion Arthur Williams. The 22-year-old German floored his opponent with a big left hook at the end of the second before a furious assault sent Williams down again in the fifth. The referee eventually waved the bout of with 58 seconds to go in that round. “Tactically Alexander did very well,” often-critical head coach Ulli Wegner praised. “He remained patient and waited for his chance. I am very pleased with his progress.” Fellow youngster Karo Murat (16-0, 11 KOs) clinched a tenth-round TKO victory over Sergey Kharchenko to win the EE-EU super middleweight title, while heavyweight Francesco Pianeta (15-0, 9 KOs) stopped Donnell Wiggins in the third round.

Next post: Is Pavlik Boxing’s Ticket Back to Network TV?