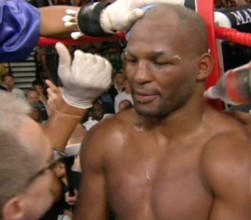 23.07.07 – By Geoffrey Ciani: It’s not too often that two elite boxers square off against one another and it’s even rarer when both are recognized amongst the sport’s top five pound-for-pound talents. That’s what made Saturday night’s bout between Bernard Hopkins and Winky Wright so special. Despite the fact many observers felt we were in for a lackluster affair, boxing enthusiasts were fortunate enough to have been treated to an entertaining scrap.

Hopkins was wise enough to understand Winky’s jab was his key to success, and from the opening bell, it was clear that Hopkins was attempting to neutralize Wright’s jab. He did this, very simply, by trying to turn the bout into a fight, rather than a boxing match. By smothering Wright on the inside, Hopkins tried to prevent him from keeping his distance and establishing a rhythm. This strategy enabled Hopkins to disrupt Wright in the opening stanza. A brilliant counter right ultimately sealed the round for Hopkins.

In the second round, Winky did a better job maintaining his distance, which enabled him to start finding the mark with his jab. Even still, Hopkins was constantly moving, continuously rolling with punches, and always giving Winky something to think about. In just the second round, Hopkins was already proving his superiority as the more versatile of the two defensive wizards.

In the third round, an accidental clash of heads opened up a grotesque cut on Winky’s eye. At this point, Winky began complaining as if the head-butt were intentional. It was abundantly clear that Winky was bothered by the incident, both physically and mentally. He was thrown off his game plan, and because of this, I knew Hopkins was going to prevail. Hopkins has an uncanny ability for breaking opponents down mentally before beating them down physically. So traumatized and distraught was Winky after the head-butt that it was obvious he had already lost the mental battle.

After the head-butt, the HBO commentators hinted that Hopkins has a history when it comes to ‘accidental’ head-butts. They likened this to another infamous head-butter, Evander “Real Deal” Holyfield. Manny Steward even went so far to say “…coming in head-first is a big part of his (Hopkins’s) attack.” In other words, the commentators were suggesting Hopkins was a “dirty” fighter.

Winky rebounded in the fourth stanza by outworking Hopkins. In fact, the more Hopkins began turning the bout into a fight, the more Winky began fighting back to remain competitive. Pretty soon, Winky was fighting just as “dirty” as Hopkins, and the bout quickly descended into an all-out scrap. Those who felt this would be a tactical bout defined by defensive prowess couldn’t have been any further from the mark.

From the fifth round on, Hopkins began dominating Wright on the inside. Contrary to the words of HBO commentator, Max Kellerman, Hopkins was effectively neutralizing Winky’s jab. Even worse for Wright, he was being forced to fight Hopkins’s fight. He needed to abandon his strategy simply to remain competitive, and for the most part, he did remain competitive, albeit, on the losing side of most rounds. As the bout progressed, Hopkins was landing the much crisper shots and appeared to be the much fresher of the two.

After a mini-rally in the ninth, Winky didn’t appear to have much fight left in him. Hopkins used subtle brilliance to batter Wright throughout the final three stanzas and at the end of the fight, Winky looked as if he had just been through a war. He looked completely drained and it seemed as if a trip to the local ICU was certainly forthcoming. On the other hand, Hopkins looked fresh and appeared as if he could have gone another twelve rounds.

It is often the case that Hopkins’s opponents look lifeless at the end of a bout, whereas, Hopkins looks much like he did before the bout began. Indeed, Hopkins seems better suited for some previous era where fifteen-rounders reigned supreme. He also resembles fighters from the old school with his uncanny ability to “bend the rules”.

Whether it’s holding-and-hitting, charging his opponent head-first, or throwing punches that border below the beltline, it’s always done in style. Few pugilists in the history of the game can bend the rules with more suave than Bernard Hopkins.

Harold Lederman accused Hopkins of cheating and holding throughout the bout. The way he was talking, one would think he was watching a Johnny Ruiz bout—that was hardly the case. Ruiz isn’t nearly slick enough to bend the rules like Hopkins; Ruiz breaks the rules, because his every move is inexplicably blatant. With Hopkins, however, there’s never proof of premeditation. It could very well be that in the heat of battle, he does these things inadvertently.

Incidentally, Lederman scored the bout a draw, which in my opinion, reeks of bias. Even Jim Lampley and Max Kellerman hinted throughout the bout that Lederman’s score was likely out-of-line with what the official scorers might have. They were being subtle, but the message came across loud-and-clear. I scored the bout 118-110 in favor of Hopkins; the three judges saw it a little closer, with two scoring the bout 117-111 and another scoring it 116-112, all in favor of Hopkins.

At his age, one must always wonder how much Hopkins has left in the tank. Is he the modern day “Ageless Warrior” cut from the same mold as Archie Moore? Perhaps he is. If nothing else, a strong argument can be made favoring said comparison.

Next post: Amateur Boxing: Karl Dargan Moves on to the Championship Bout with a Semifinal Victory at the Pan Am Games