Darnell Wilson Interview: “A title fight with Maccarineli, Cunningham, and Mormeck or an eliminator with Adamek, or Jirov is what I want!” 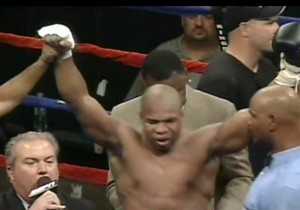 19.07.07 – By Izyaslav “Slava” Koza: Fresh off what has to undoubtedly be the knockout of the year Darnell Wilson wants what any real boxing fan should feel he deserves. Whether he looks crude, limited, a gatekeeper, a journeyman, or any of the other negative stereotypes to some, there is no doubting that he has worked his way up to deserving a title opportunity.

It doesn’t matter what division, what fighter, or which brand of politics, some want to cite to avoid the truth, but besides Miguel Cotto in recent years, no other top contender has shown such a high caliber level of accomplishment in climbing towards the doorstep behind which is championship glory.

ESB: With the vicious KO of Nwodo is there any concrete information regarding your deserved title shot in the near future?

Ding: Well that is all we are talking about at this point, however, as of today there is nothing concrete. First thing tommorow my promoter Dino Duva will sit down with Lindsey Tucker from the IBF. We are trying to do a fight with Cunninghman on the undercard of Oleg vs Sam, but because of the complications with that fight it could be a problem. Cunningham also has an offer from the Germans who want him to fight Huck and are apparently offering a lot, and he deserves it, but that might be the reason it won’t happen. Of course I want Mormeck the most cause he is the recognized guy, but he will fight Haye, so even if I could get the winner of that bout it would be a long while before it happens.

ESB: I know you had mentioned you had issues with sleep deprivation again. Is there something you can do with a psychiatrist perhaps that can help you in this area?

Ding: Man, I was doing so good till the last day before the fight until I ran into that problem. I was just nervous, with fighting the fight in my head again, and so it was my fault in that sense. I can’t go into fights like that again period. I should have ended things in the 4th.

ESB: I don’t doubt that it is an issue, and I don’t mention it to excuse your performance, but if it is such a serious issue then it might be the reason why you end up with another loss. Before the Wlad vs Sanders fight, Corrie saw a guy and that obviously helped him.

Ding: Yeah, this has been discussed by my team. We are talking about seeing a sports psychiatrist. I was really nervous about fighting a guy I knew was dangerous but was just unknown to the public. It is just the reality of what happened. It is unfortunate and people can believe it or not, but I will never let it happen again. Whatever the hell it takes for me to get to sleep, will be done, so I am rested and sharp.

Another reason I was less then my usual self was I had no sparring and my timing was off because of it.

ESB: What was the reason behind that?

Ding: I hate to say it cause it sounds like self hype, but I hurt some guys in sparring.

ESB: What about using big gloves and them using full headgear?

Ding: I use the biggest gloves, but they just try to show off against me, and I have no choice but to put them in their place.

ESB: I know in my review of the bout I mentioned how your job might be an obstacle to focusing 100% in case you get a title fight. Do you think this is a fair concern?

Ding: Besides the sparring I was able to train pretty hard, and it’s my own company too. The last day though the sleep was the bigger issue. I get real puffy when I don’t get the sleep I need. People who saw me before the fight did say, “you look great,” but after they could tell, especially in the face, that I looked puffy. That will be rectified though.

Also wanted to mention something about that whole Adamek thing on the boards. All he has to do is sign to fight me and I will knock him out.

ESB: (laughing) Ok. What about Braithwaite-Maccarinelli?

Ding: I tell you I was mocking Enzo for his opposition, and they might think Braithwaite is not dangerous and done or whatever, but that is a big fight, and a fight I think Enzo will lose. Regardless I give him credit for taking that fight, but even so with me he is getting knocked out.

We are already in dialogue with Warren regarding getting the winner of that bout, but Cunningham wants him too. We may consider an eliminator with Adamek too if possible cause he was the former light heavy champ.

ESB: Supposedly there are rumors that Rahman is coming down to Cruiser. Would you want to fight him?

Ding: (long pause)…….What? that’s just retarded. That just seems impossible. I wish him luck and all, and I hope he gets something done, but I feel he walks around at an unhealthy weight.

ESB: Vassiliy won his bout last night. While it was a journey guy it was still good for us Jirov fans. Do you have anything to say about it?

Ding: Well, yeah, it was Craven but still, he did what he was supposed to do. I congratulate him and it is great to see him come back to cruiser and get the win the way he should against a guy like that. He deserves his shot at Hill for all he went through and it does seem possible what with them fighting in North Dakota.

ESB: If you were to win a belt at cruiser would you attempt to unify right away the way Ibragimov and Chagaev are doing?

Ding: I would not want anybody else at that weight calling themselves a world champ but me. A lot of guys don’t want adversity. They don’t understand that a loss isn’t the worst thing in the world. In fact Cunningham’s people should jump at the chance of fighting me because of how bad I looked in the Nwodo fight.

ESB: You think you got the KO of the year over Donaire and Cintron?

Ding: I think mine was better cause my guy lost consciousness on contact. It was a good combo that put the guy to sleep. Donaire was good but it was more technical, and came after a good fight, too, but I put my guy to sleep with my one shot. Also, I wasn’t behind in the fight as some believe. I was behind during the bout but by the end I worked my way back and had evened it up and was winning on one card actually cause I did the work. Still as a people on the street talking type of a thing, mine was just more definitive of somebody saying, “that guy got knocked the #%^@ out on contact.”

ESB: You know even though you and Cintron got the KO’s I really think both fights were stopped a bit too late and why you were able to land those KO of the year candidate type shots.

Ding: Well Nwodo was still fighting back but I understand what you are saying, they could have been hurt even worse.

ESB: Yeah, I am not trying to say that so I am hyping you but rather that you could have, and Cintron could have, left Nwodo and Mathysse paralyzed. With your power it becomes twice as important to stop the fight at the right moment. Ok well great talking to you as always. Anything to add in closing?

Ding: Well you know just looking to fight the best champ and push for a title shot, and since I did it the old school way I deserve it. If I don’t get it I will fight Jirov or Adamek in an eliminator if they want it. Thanks for supporting me and I will keep posting on the boards in my free time and chatting there.

I want to thank Darnell for his time and let’s hope we have a cruiserweight champion posting on the forums by the end of the year.

Next post: Exit strategy: What is Oliver McCall thinking?

Boxing News → Darnell Wilson Interview: “A title fight with Maccarineli, Cunningham, and Mormeck or an eliminator with Adamek, or Jirov is what I want!”