31.08.06 – The “Giant” arrives in NYC: On Monday Nikolai Valuev (photo by David Martin Warr / DKP) arrived in New York in order to have a one-week promotion tour through the USA. From the airport Berlin-Tegel he flew directly to the “Big Apple” – an easy going flight was behind the heavyweight champion who travelled together with his manager Wilfried Sauerland and his wife Jochi Sauerland. 9 hours flying time crossing the pond went by very quickly because Valuev visibly enjoyed the business class´ comforts.

After arrival, things went on: Alan Hopper, promoter Don King´s PR boss, was already waiting for the Russian guest at JFK airport with a huge black stretch limousine. But Valuev was busy because of the autograph hunters waiting for him at the airport.

Team Sauerland moved into the famous five-star hotel “Michelangelo” situated between the 6th and the 7th street. Afterwards they visited the Rockefeller center and went on an extensive shopping spree. Finally Valuev also found something to buy at “Rochester Big and Tall”. “It´s not easy to find clothes in my size that fit”, said the 2,13 meter tall giant from St. Petersburg who has been invited by Don King to eat at his favourite Italian restaurant. Calm before the storm..

His first night in New York: A good night sleep and rest. The long flight, sightseeing, shopping tour and finally the opulent dinner with promoter Don King at his favourite Italian restaurant: all of that made Nikolai Valuev tired. Therefore the “Russian Giant” went to bed at half past ten. The following day of his one-week promotion tour has been full of duties. Shortly before 7 o´clock the alarm clock got him out of bed – his coach Manuel Gabielian was already waiting at the door. Valuev got into shape for the day by having a one-hour run through Central Park.

After having had a shower and his breakfast Valuev went to his first date of the day: An interview with ESPN . ESPN had invited the guest from St. Petersburg together with Don King to be part of its morning show “Cold Pizza”. The promoter powerfully beat the drum for the fight taking place in autumn and talked about the “Big Red October”. It turned out that the “Beast from the East” – a name Nikolai Valuev does not like at all – had developed into the “Russian Giant” meanwhile at the USA. In the meantime ,the US TV station HBO has been waiting for the 2,13 cm meter tall giant. But first he absolutely wanted to visit the place where unbelievable things happened on 11th September, 2001. Ground Zero. But he had no time for silence and reflection being at Ground Zero. People identified him, went to him, shook his hand and Nikolai again signed autographs.

On the 15th floor of the HBO tower, the assembled team was waiting for the champion who had to fulfill an especially important task there. The reason: HBO is going to live-broadcast the world championship fight against Monte Barret on 7th October. Valuev must have been impressed by the atmosphere at the studios with the direct look at the Empire State Building because he did something unusual by greeting the American viewers with the sentence “I´m happy to be in America”. Don King again went into raptures about “Big Red October” and talked about the greatest boxing event of the year in the USA. A four-hours video and photo shooting followed. With belt, without belt, grimly and smiling, shadow-boxing – and the make-up artist right in the middle. About 30 people worked at the set and Nikolai Valuev professionally carried the event through. Valuev visibly got a big kick out if it – even if the job was not easy at all.

Undoubtedly the tension became unbearable when they finally met each other for the first time: Valuev, the champion and his challenger Monte Barret. The American obviously wanted to show no trace of emotion. But standing next to the Russian being one head taller… respect in Barret´s eyes could no longer be ignored. Nikolai took it in his stride. Maybe he had the next date in his mind. An interview again – with US tv station VOX.

Valuev with full schedule: The third day – from New York to Chicago 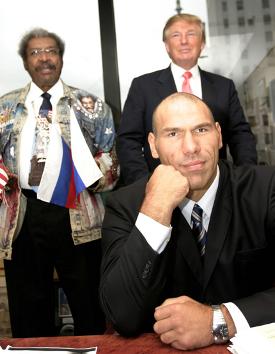 “Undefeated in 44 professional fights? That´s a great performance.“ This made quite a deep impression on Donald Trump (photo by David M. Warr / DKP). Nikolai Valuev, heavyweight champion from Russia, was sitting at his desk enjoying the fantastic view over New York´s skyline and his host expressed his admiration. After having visited the Russian ambassador in the morning of the third day of his promotion tour through the USA yesterday the next highlight was waiting for the “Russian Giant”. Donald Trump who belongs to the USA´s most popular rich men since having built the Trump Tower in Manhattan had invited Valuev to visit his holy shrine. Only a few people are allowed to step into his private office at the 26th floor of the tower – and Nikolai belongs to them. “You know, I got to know many sportsmen, even Mike Tyson. I´m a great sports fan”, tells Trump who got into people´s good books by showing a friendly behaviour to all of his employees independent of their social status. For this reason he has been selected by the US citizens to be the most beloved billionaire.

“And being undefeated for 44 fights? Just five wins are missing to overtake the legendary Rocky Marciano”, Don King makes a note. Valuev likes listening to things like that, Don King went into raptures and finally Donald Trump heavily shook hands with the “Russian Giant”

Now sightseeing was on the list. The Russian guest visited the halls of the United Nations Plenary Assembly and of the United Nations Security Council in the United Nations building. Moreover he was given a warm welcome by the USA´s ambassador of the United Nations, John Bolton. At the Empire State Building things went better for Valuev than for the tourists. While they only were allowed to step into the building after having waited a long time for the extensive security check Valuev straight away passed through. The elevator brought them to the 80th floor. Afterwards they had to walk a few steps to reach the viewing platform at the 86th floor. This has been worth a view and a meeting which the attending tourists will not forget. The giant was the star, willingly signed autographs and let his fans take a photo.

Professional daily routine followed. The first press conference together with Valuev´s opponent Monte Barret was a media magnet. The restaurant´s “Firebird” room not far away from the Empire State Building was fully filled. Don King opened the question time and hypedg the coming fight: “Big Red October”. Moreover he did not forget to remember the fall of the Berlin wall which makes it possible today to meet in such a way. “He´s a fascinating figure. I´m really glad about this fight taking place”, Monte Barret´s manager Rick Lazes says. “But during the fight Nikolai has to prove how good he really is.”

Barrett and his team were deeply grateful to HBO, Don King and to Wilfried Sauerland. But he also remembered a notable fact. “Don King always steps into the ring together with the winner and he always leaves the ring with the winner. And I hope I will be the winner. Of course Nikolai Valuev is a great guy, a fantastic champion. But I will look for and find some ways and means. After all I gained more experience – with boxing and in my life. When I lost my footing three years ago nobody longer believed in me. But my manager and my coach helped me. And now I want to get the belt to the USA.”

Nikolai Valuev gave a warm welcome to the American people by saying “I´m happy to be in America”. Moreover he thanked them for the possibility to have such a great fight. There is no question about him having great respect for his opponent and his team. But he is assuming that he will keep the belt. “I climbed into the ring 44 times as a pro and I never left the ring as a loser”, the champion says. Nikolai also tells the attending media about his first impressions of New York. “So far I met a lot of nice people, most of them with a positive smile”, he tells. “But I also have been at Ground Zero and I saw the people´s sadness. I thought a lot about the whole terror. I´d like to express my condolences to the American people. “

Fighting in the USA, the boxing nation nr. 1, is a special challenge for Valuev. But he will behave different than his fellow country men. “I´m not going to move to the USA. St. Petersburg with my family living there and my second home Berlin are my purposes of life.”

Meanwhile Wilfried Sauerland remembers the years past. “When Nikolai had his first professional fight for our team three years ago just a few believed in him. But we did.” Valuev became the world champion during these three years. Sauerland is proud of him wanting to capture the American´s hearts. “Finally Nikolai is not just an impressing figure”, Sauerland says. “Mainly he is a very likeable, sensitive and intelligent man.”

Again it has been a day crammed full of dates the champion had to absolve. But he also had to say “Good Bye” to New York. In the evening he flew from New York´s airport Newark to Chicago. The next press conference was already waiting for