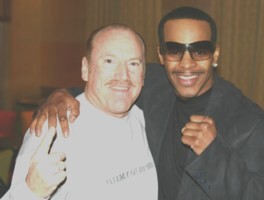 29.04.06 – By Wray Edwards: Photo (C) Wray Edwards…For Lightweights age thirty is usually a turning point. Generally, the higher the weight, the older a boxer can be and still remain competitive. With 37 fights under his belt Acelino might just have peaked. He certainly has had some high-profile encounters and earned a real solid place in the Super Feather and Lightweight divisions. Though he has taken a couple of tune-ups since his drubbing by Chico, one wonders if his quit V Corrales has installed a permanent question mark in his warrior’s soul.

Raheem with ten fewer fights is less shop-worn and has recently had the most telling test in his confrontation with Morales. Zahir’s manager Cameron Duncan, with whom ESB conversed this evening, has an impressive swath of green in his BoxRec grid. He is deservedly proud of Zahir’s recent emergence.

Can Freitas get back on top or will Raheem steam past him as he did V Morales? If he does, who should be next? In terms of size and style either Lakva Sim or Joel Casamayor would be very entertaining. Certainly Zahir is not ready for the Likes of JL Castillo. Have to agree with Atlas…the edge goes to Zahir. As for covering this event…the hits just keep on coming.

So I get up at six am and fight through morning rush-hour over to the airport…make the plane with two minutes to spare (last one on)…fly to Norfolk, fly to Baltimore, fly to Providence…rent some wheels…careen over to Foxwoods…park the car…zip up the elevator and get to the weigh-in venue thirty minutes early. Cool huh?

NOT REALLY!!! I walk up to this guy (turns out he’s the commissioner) and say, “Hi…we about ready to go?” “No…” he says “…the weigh-in’s already over.” “WHAT!!…”You’ve got to be kidding…the schedule says 5:pm.” “We started early…the doctors had to leave…maybe you can get some pictures from one of the few photogs who were lucky enough to be here. We just finished about two minutes ago.” Yeah right…like that’s going to happen.

So I go out in the hall to seethe for a few minutes. Finally, returning to the venue ESB listens in on the pre-fight conference between the managers, the ref (Steve Smoger) and the WBO Chairman. Meanwhile it was kind of comical watching
other photog/writers zipping into the room to cover the weigh-ins. Each time, their mouths fell open in disbelief as they were told that the event was already over; Kind of a tacky move on the part of the officials.

A good thing to do, under the circumstances, would have been to keep the boxers around until five-thirty or so just to say hi to the media who missed the scale pics and pose for a few.

Waiting patiently for a consolation prize was worth it. First we had a very pleasant conversation with Steve Smoger regarding referee styles and their potential as choreographers of the dangerous dance. Then, as luck would have it, a tastefully dressed Zahir Raheem cruised into the room to pose for a few and greet his fans. Both boxers made weight right on the money (135#).

ESB will be at the apron for this event to record and report. See you at the fights.