30.05.05 – By John Scully: Got to Vegas on Monday and went right over to Caesars for the PC. Manfredo got the biggest hand from the fans….A lot of girls there, treating the fighters like they were the Backstreet Boys. “Joey! JOEY!!!” On the day of the fight I was walking through and I see a guy from behind signing autographs so I know right away its a fighter.. it is, it’s MIKE MCCALLUM. I sparred with Mike once back in 89′ in Vegas and I was talking to him about that day when another fighter approaches… they used to spar each other, too, back at the KRONK. So U KNOW I had to get a pic with the both of them….. McCallum and HITMAN TOMMY HEARNS.. 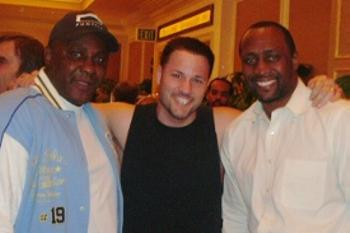 The Contender fight…. good fight, much closer in person than most watching on TV said it was. I thought Manfredo had the right idea but the fast pace seemed to wear him down. The other kid fought a smart fight, too. I definitely think the fight only being 7 rounds was a bad move for the show… it is hard for REAL SKILLS to come through in prelim distance….

Justin Timberlake and Cameron Diaz were there at the fight. James Caan, too. I saw Caan in the casino after but my camera batteries were dead. After the fight they had a big party at the night club in Caesars, called PURE. The regular club crowd was there and many of us got special invite passes for the post fight party there. Rita and I went and hung out for a good while. Everybody was there. Kaddour was there, Alphonso Gomez and a few other CONTENDERS. I hooked up with New England buddies Mickey Ward and Jimmy Birchfield for most of the time. Jeff Fraza was there too. Saw him on the roof of the club, outside over looking the strip, signing autograph and taking pictures like he was a rock star!! Had a group of girls around him, he was living it up LOL. I ran into Chico Corrales in the club, too. He was good friends with Clay-Bey back in the amateur days so I gave him LCB’s number etc. Chico is a VERY COOL guy, very down to earth. One of the nicest guys in Boxing I have ever met.

Ken Norton was in the club. Big guy. He was real cool, we talked about Archie Moore for a little while. They have this raised platform above the dance floor and I saw some people up there including Ray Leonard, JUNIOR. I went up and over to say Hello (we have emailed each other a few times in the last year or so but I had never actually met him) So I am on my way to say Hi and I see people sitting on these couches on the platform right next to me. This one guy is sitting right next to where I am standing and I am telling Rita ‘That’s Eddie Murphy!” ‘And, Hey, that’s Johnny Gill sitting right next to him.” Sugar Ray himself is right next to Johnny with his back to me. I had wanted to get Rita a photo with him but didn’t want to bother him with all those people around so I kept walking by. At the end of the platform I run into my man Roger Leonard (Ray’s bother) and we have a real nice reunion. Rog was a real good fighter in his own right, TOO. So anyway, after a while I see Eddie Murphy and his wife coming by followed by Sugar Ray. There is a lady there and she is escorting them out and when she walks near me she sees I have a camera in my hand. She looks at me and says NO PICTURES. Not that I had even thought of asking to use the camera, I just had it in my hand all night from when we were at the fights. So anyway Ray comes up from behind her after she says that and comes right to me and gives me a big hug. I introduce him to Rita and he takes a photo with her without me even having to ask.

Hugs me again before he is escorted out. The lady was upset I think. LOL Back down on the main level I am back over by Micky Ward and Birchfield and next to us on a couch in a roped off booth is Hulk Hogan and Chuck Zito. Jackie Kallen is close by, too. Corrales and Mickey are talking for a while to each other. I am looking around thinking how most of the party people in the club have no idea that these two little guys talking to each other among them have been involved in 3 or 4 of the greatest EVER fights. When we finally head out to the valet at Caesars to get our car we meet up again with Jimmy, Mickey Ward and a few other people and they invite us to a late dinner at the Palms Hotel. 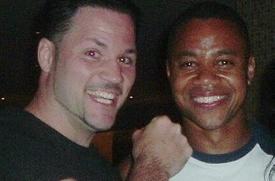 I am glad we were invited!! One of the dinner plate was 149 dollars!! I only eat at places like that when I am INVITED. LOL So we are sitting there at the Palms and it is a restaurant/club and there is a group of guys a couple tables away and someone says that it is Snoop Dogg crew and they are waiting for him to come in from a performance earlier in the night. I never found out if it was. I see this one guy in the group though and I am like “That’s Cuba Gooding, Jr!” I remembered that Cuba was said to have trained for boxing at the WILDCARD Gym in L.A. so I go over to him and when I walk up to him he looks at me, grabs my arms and shoulders and says ‘Your a fighter, right? Your a boxer??” I say yes of course and Cuba was REAL cool guy, real down to earth! I asked him if he trained at the gym in LA and he said ‘yeah’ and that he even got to spar James Toney before and I know he isn’t lying because I tell him I used to spar JT, too and I said something about him being slick and he said “YES, AND he sure can talk some S*** too, can’t he??” If you sparred with James then you know LOL I laughed at the thought of James verbally abusing the Academy Award winner just as he would a top pro. James is VERY profane when he spars. 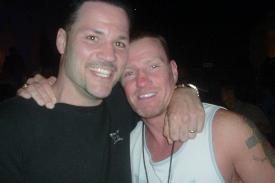 Later on these guys that are from Vegas want to take us all to the club upstairs, the most popular club in Vegas called GHOSTBAR. Now, everybody is really dressed up pretty much. The line outside the club is full of people waiting to get in, like they are at Disneyworld waiting to go on the roller coaster. NFL players, NBA, etc. And they love us to the front of the line. Only problem is, Mickey has on sneakers and basketball throwback uniform LOL. So they say listen we love having Mickey Ward here, it’s an honor but you gotta’ have real clothes on to get in. Mick is blue collar though, u know? He doesn’t care. He tells them he will just go home. They actually go to the kitchen and the chef gives up some of his clothes, pants and shirt, so Mickey can get in!! We wait for 30 minutes or so and they come back with some clothes. but Mick LOL like I say he is a blue collar type of dude. He is not saving it, changes clothes for nobody LOL To go in a club? PLEASE. These guys with us are club type of guys and they are saying “Mickey, come on, bro. You gotta wear these clothes. Famous people are going to be up there, it’s gonna be cool.” And Mickey is like “What? I don’t care about seeing some famous people. Screw it, I’ll go home. If they don’t like the clothes I wear. You think I care about this club?” LOL I loved it! They are trying desperately to get him to go and he looks at me and says “Johnny, you know me. You know I don’t give a **** about this club.” I laugh LOL I tell these guys “Your wasting your breath.” And he doesn’t go. And neither do I. The club scene isn’t my thing anyway and waiting in line all this time has worn me out. So Rita and I go outside to check out the strip etc and run into Alphonso Gomez, seems like a real nice kid, too. Just like he was on the show. Went to the Cheesecake Factory the next night and run into Ishe Smith and his family, although I dont approach him. Went and checked out Red Rock Canyon on Wednesday. If you have ever been to Vegas and have never driven out towards the mountains then you haven’t seen all there is to see out there. UNREAL landscapes, look like something from old John Wayne wild west movies. There are wild burrows and horses out there. Houses way out there in the middle of the desert. An old motel you can stay at with nothing around. Cool stuff. If you go to Vegas ever, get a renter and get out there. Like a new world.

Finally, went back to the pool on top of the Aladdin (where Elvis got married) and it is above the strip, next to the Paris. Check the pic from the Aladdin pool. It was a good trip and I just wish my man Manfredo could have came home with the ONE MILL. 250 G’s isn’t too bad, though. He’ll be back. I think most of them will.