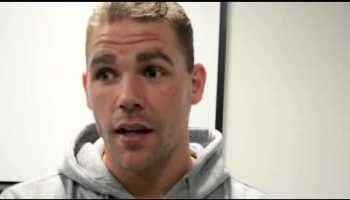 There is more good news for Britain’s undefeated middleweight Billy Joe Saunders (21-0,11ko) this morning as he has been named the EBU fighter of the year. In a joint accolade his fight with Chris Eubank Jr last November (19-1,14ko) has also been named EBU fight of the year.

It’s a deserving award for the British, Commonwealth and European 160lb fighter ahead of his blockbuster world title challenge later this year against “Irish” Andy Lee, who we saw last weekend in a good fight with Peter Quillin which ended in a hard fought draw.

Saunders beat Eubank in a cracking little fight last November that was the hopefully just the first installment of a rivalry that harks back to the days of Chris Eubank Snr and Nigel Benn in the 90’s.

Of his award, the Hatfield man said;

“It’s fantastic to be recognised by the EBU for not one, but two awards. Being named boxer of the year is a tremendous honour, seeing as there are many good European fighters out there. My achievements in the ring haven’t been matched by anybody else in the last few years however, so I’m delighted that they have recognised that”

Of the Eubank fight, Sauder’s said;

“It was a great fight to have at that stage of my career to establish my dominance as the number one in the division in Britain and Europe, without doubt. I was confident that I would beat Eubank Jr and that proved to be true.”

Enjoying any opportunity to have a sly dig at the Brighton fighter, Saunders also said;

“Whilst Eubank Jr wasn’t the hardest fight of my career, it was certainly the most high-profile, and since beating him, it’s put me on another level.”

I think Billy Joe knows the fight was a hard slog, especially come the later rounds when he surrendered physical control to Eubank after initially boxing his ears off and starting brightly. However those who have criticised Saunders over his 12 round fitness in the past will continue to assert that had Eubank himself started faster, it’d be he with the victory and not Billy Joe, as toward the end of the fight, Saunders was once again fading.

I’m not so sure where I stand on this. In my heart of hearts its possible Eubank takes a rematch and we see a third. They are two completely different fighters, yet as the old adage goes, “styles make fights.” That’s what close and epic rivalries are meant to be about isn’t it? And it’s why we will 100% see the rematch at some stage in the future. Frank Warren has asserted he will be putting it together, and Eubank is absolutely desperate for it.

However, as WBO mandatory to Andy Lee, Saunders has insisted that is the route he is to go next, and that win or lose, any match with Eubank Jr will have to wait until AFTER that fight happens.

We were due to see Saunders on the Lee-Quillin card as part of the step aside deal he took to let Quillin fight Lee first. However injury scuppered those plans and we will instead see him in a warm up against an opponent who is TBA on Frank Warren’s May 9th show in London.

Eubank Jr will also appear on that card, against unheralded Aussie Les Sherrington (35-7,19ko) in a defence of his WBA interim title that he won in February against Dmitry Chudinov.

Following that, we will get the big summer showdown between Saunders and Lee. Negotiations between the two camps are set to begin shortly. It’s gonna be a belter for the fans!