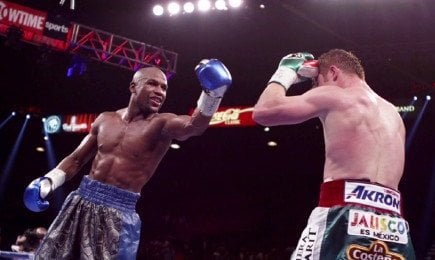 2014 will end as one of Mayweather’s more intriguing chapters of his 18 year career. After closing out 2013 with an amazing performance over Mexico’s Saul ‘Canelo’ Alvarez, Mayweather entered 2014 on a high. Unfortunately, a love life gone bad, assisted by other personal drama’s would only serve as a small subplot compared to what would unfold on the night of May 3rd, 2014. Mayweather would dig deep and create a path to victory, but a rugged performance by Maidana proved that even the great ones have reason to fear ‘father-time’.

Despite a more sound performance against Maidana in September, the overall consensus is that the ‘Money train’ could be nearing its final stop. What remains to be seen is whether that “stop” will be voluntarily at the end of his current contract? Or whether it’ll be induced under the claw (or should we say ‘south’ paw) of the last man in the sport worth facing? Despite age and boredom, Mayweather remains heads above the rest of the pack.

Sadly, 2015 will open with the same question that opened 2014 for him: “will he finally take the test of all test”? His reputation is golden and his legacy is already cemented. That said, there’s only one way to permanently silence his critics. Simply put: he can’t lay claim to being “The Best Ever” until he soundly defeats the “other” best of his era. Not sure how it happens, but a victory over Pacquiao must happen!

For Manny Pacquiao, 2014 ends with mixed reviews, and 2015 opens with major questions. Only a few years ago we saw an incredible and unprecedented run, capped off by a remarkable feat bearing 8 world titles in 8 different divisions. Sadly, despite two credible victories this year, the dominance seen prior to 2012 is little more than a faded picture from a broken past, leading many to question how much longer the fighting Filipino has at the head of the class.

His victory over Timothy Bradley was clouded by skeptics who felt it was an opponent he had already defeated; and the mere fact that he even agreed to face the untested Algieri raised more questions than answers. Presently, Pacquiao is faced with a similar fate as Floyd Mayweather, in the sense that the very greatness which has exalted him is suddenly being viewed as an angle to humble him. Similarly, both have run out of worthy opposition.

Names like Jesse Vargas and Amir Khan continue to circulate, but a consistent sub-400K PPV buyrate tells us exactly how the world feels about Top Ranks matchmaking for him in this post-KO loss era of his career. Being a fan fave, few have held his feet to the fire with the same passion that they have Mayweather but I’m afraid the time has come: failure to make a Mayweather fight at all cost in 2015 can only further damage an already questionable legacy.

In the case of Miguel Cotto, 2014 was little short of an anomaly. The Puerto Rican warrior suffered two back to back losses in 2012, and followed that effort with a sole 2013 victory over an opponent whom technically doesn’t even meet the ‘confidence builder’ criteria his matchmakers aimed to suggest. He entered 2014 eager to elevate himself to new heights and made history in the process, becoming Puerto Rico’s only 4 division champion.

Unfortunately, the victory as well as the history it entailed only clouded the true perspective, creating more questions than answers. How do you assess the value of a fighter who has only taken 116 punches in 12 rounds over the past two years? There lies the million dollar question for Cotto as skeptics firmly believe that he’s currently fighting on borrowed time, only possible by virtue of victory over talent not capable of defeating him.

2015 options available no longer give Cotto an easy way out. Mayweather and Canelo lead that class, although Bradley, Andy Lee, and a mandatory named “GGG” could also set the table to feast! A deal to face Canelo has sat, awaiting Cotto’s signature for “6 weeks”. The fact that this decision has taken so long tells us all we need to know about Cotto’s confidence at this stage. Bottomline: We don’t know how this year will begin for Cotto, but it’s foregone conclusion how it will end: RETIREMENT.

Entering this year on the heels of his first defeat, ‘Canelo’ Alvarez bounced back strong! Although over-matched, Angulo was a solid confidence builder to get in some treasured rounds with measured adversity. He followed that effort up with an interesting night against Cuban Erislandy Lara. A man whom most today consider too much risk for too little reward. Love him or hate him, Canelo has proven time and time again that politics play little role in his future.

The kid will face any one, any where, any time, and for that, we as boxing fans should all remain grateful. 2015 will open with a few questions for him like most others, but we should all take pride in the fact that he’s more than eager to accept those challenges. Cotto could be first on deck, but Canelo has gone on record to say that anyone from Golovkin to Bundrage, to Charlo and all in between can get a shot.

He may not have the attention of every fight fan globally, but one thing no one can deny is the fact that his old-school warrior spirit knows no bounds. If he can end this year undefeated and continue to elevate his level of competition, he could eventually evolve into the biggest draw in the sport today. Win, lose, or draw, he’ll perform when the lights come on! It’ll be entertaining to see if any opponent today can match him!

For Timothy Bradley, 2014 is a year he’d probably be better served forgetting. After defeating the rugged Provodnikov and the always credible Juan Manuel Marquez in 2013, Bradley saw 2014 to in a direction that proved to be a polar opposite. In April, he loss a very lopsided affair to Manny Pacquiao, and in December, he fought to a DRAW with Diego Chaves. Always eager to prove himself, Bradley has gone on record to say that he’s “taking on all comers in 2015”.

Sounds good in theory, but with a reckless style that has little caution and many questions, how will this bode for him by the end of the year?

This is a question that can only be answered by the men who stand across from him. One thing we know is that Bradley will forever put his all on the line. As difficult as he can be to watch, he is to tame; and few in the sport have seemed to master that effort to date.

2015 could be an interesting year for Bradley, particularly in light of the recent acknowledgment that he’s open to going back down to 140lbs “if the right opportunity presents itself”. There’s no way to truly know what kind of year he may have, but if Kell Brook gets the nod this Spring like insiders have suggested, we may not have to wait long to find out. Either way, this year we will learn what his ceiling in the sport is one way or the other. Stay tuned.

Few in the sport have remained as busy as Golovkin, en route to his solid 28KO’s in 31 victories. Every night out, he has continued to show us promise and a never-ceasing spirit, responsible for breaking the will of everyone who dare stand across from him. Thinking about those words sound great in theory and certainly sets the table for a pending havoc waiting to happen.

Sadly, despite the love for KO’s in boxing, it’s becoming more and more evident that most would rather see him tested to support those claims. You can only watch the same movie so many times before you eventually walk out, and ultimately decide not to even show up to watch! The most telling tale of Golovkin’s run is the fact that this is now the second year in a row where his handlers felt the need to tell the boxing public we should “expect big things” in the year to come.

Despite being told that at the end of 2013, we’ve yet to see him face the level of competition necessary to validate their prior statement of him “cleaning out” all divisions from ’54 thru ’75. He didn’t come close to this promise in 2014, which creates a certain pressure to finally make it happen in 2015. By this time next year, I fully expect to see Golovkin prove his mettle against a top level fighter. At this stage, anything less fails the test!

For Khan, 2014 ended with a bang! Khan has shown strong maturation over the course of this year which has elevated his name, but as history has shown, the higher one rises, the harder one falls! His union with trainer Virgil Hunter has seemed to pay dividends, but one can’t help but question whether or not what we see is what we’ll get when the rubber actually hits the road?

Khan put up a solid outing against rusty veteran Luis Collazo, and continued that dominance against a very game, yet fundamentally challenged Devon Alexander. All that dominance in the rearview conflicts with a glimpse that lies ahead which tells us that as much as we want to be supportive of him, the true test has yet to come. When we look at the ledger of opposition at welterweight, we see arguably the deepest stable in the sport. Bradley, Thurman, Maidana, Brook, Mayweather……Pacquiao.

Even with Hunter by his side, is he truly at the level of such opposition? Critics say “his chin is still a question”; while supporters say “he can’t be out-boxed in a loss”. Reality lies somewhere in between. Peterson proved only a few years ago that he can in fact lose on the cards without being stopped, and Alexander showed us he can still be rocked. That being said, while he’s a good style for Mayweather, he could fall flat to several others. At its best, 2015 can be Khan’s biggest year, or another realization of his biggest fear! Stay tuned.