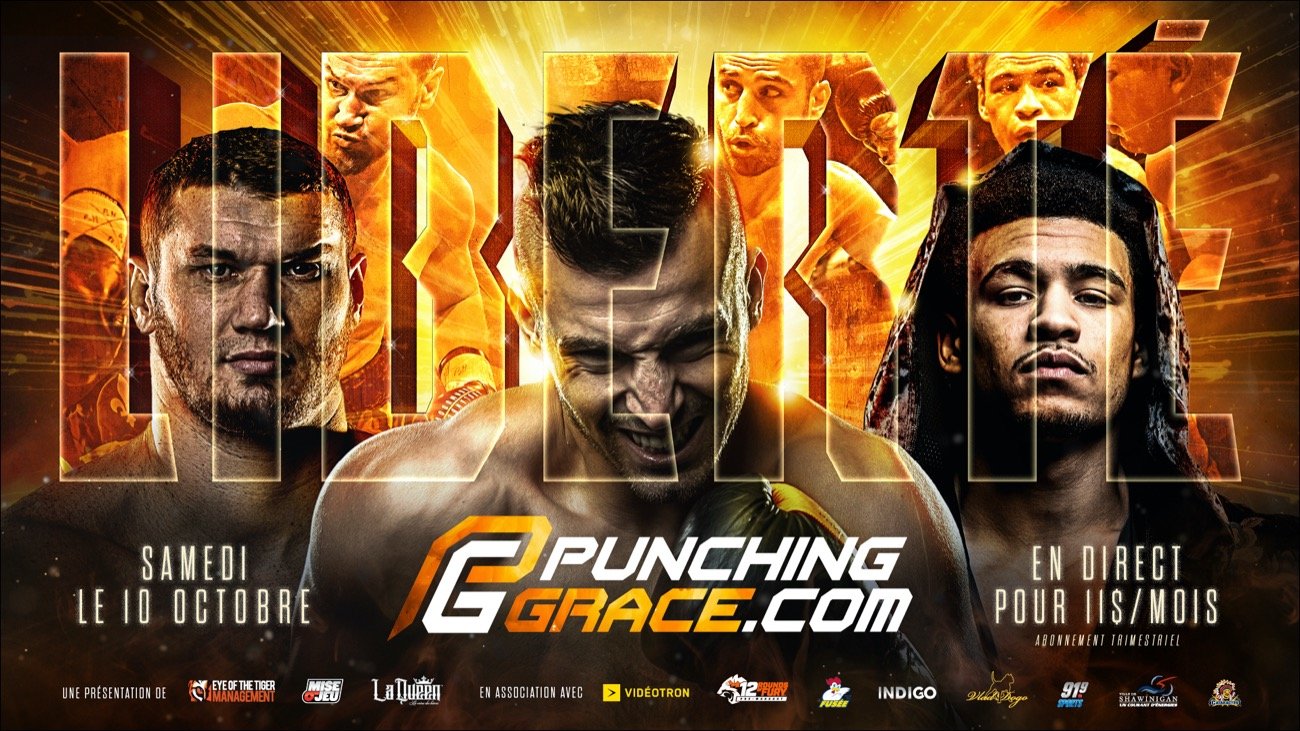 Following the authorization granted by the public health authorities regarding the resumption of activities in the combat sports sector and the holding of professional sports events, Eye of the Tiger Management will present its first gala since the outbreak of Covid-19 on Saturday, October 10th. The Montreal organization unveils, in association with the Cataractes of Shawinigan, a most exciting lineup for this first edition, where David Lemieux (41-4, 34 KOs) will face Francy Ntetu (17-3, 4 KOs), Arslanbek Makhmudov (10-0, 10 KOs) will defend his NABF title against Dillon Carman (14-5, 13 KOs) and Lexson Mathieu (8-0, 7 KOs) will be pitted against Tim Cronin (12-4-2, 3 KOs) for the NABF super middleweight title. The event, which will take place behind closed doors at the Center Gervais Auto in Shawinigan, will be broadcast live on the Punching Grace web platform and on Indigo, starting at 7:30 p.m.

“The health of athletes and those around them is a priority, so we have worked very hard, together with the Régie des Alcools, des Courses et des Jeux, to establish a safety protocol that meets all the recommendations made by the Quebec Public Health Department. Although the latter authorized us to present the event in front of the public, we made the decision to keep it televised only, given the current epidemiological context and the resurgence of the number of cases in the last days. We would like to thank the organization of Les Cataractes as well as the city of Shawinigan for their invaluable collaboration and without whom this first event behind closed doors would be impossible,” said EOTTM president Camille Estephan. Among the measures imposed, the organization will require all boxers and coaches participating in the October 10th gala to isolate themselves for a period of 14 days preceding the event as well as 10 days after it. They will also be confined to the hotel 4 days before the gala and will be tested for Covid-19. On the evening of the gala, security guards will be deployed to ensure that all participants respect the physical distancing of 2 meters as well as the other security measures put in place including the respect of wearing a mask or face covering at all times, one-way corridors of movement as well as the use of hand sanitizer.

The Cataractes of Shawinigan are very happy that EOTTM has chosen to join forces to present this gala, which clearly shows that the Mauricie region has become a staple of boxing in Quebec, adds the president of the Cataractes, Roger Lavergne.

“We opted for local fights, not only because we wanted to avoid international air travel and the associated risks, but also to allow Canadian boxers to get back into action,” adds Estephan. “Local duels are always very popular with boxing fans because they are often the most exciting and electrifying. We have had proof of this on several occasions, notably with the Germain vs. Claggett, Bazinyan vs. Ntetu and even Drolet vs. Kalunga, which turned out to be memorable fights. We are very proud of the card that we have managed to put together in such a context and we are convinced that it will delight boxing fans across the country, ”, he adds.

Indeed, some of the most intriguing local fights are in store for this first gala on Quebec soil in the context of Covid-19. Chicoutimi native Francy Ntetu hopes to cause the surprise by winning his duel against slugger David Lemieux and thus create turmoil within the 168 lbs division: “We recognize the real ones on the battleground. You did wonders at 160 lbs. I have respect for you and your background. We often sparred together, we know each other. Except this time, I’m not coming for a sparring. I’m coming to snatch the victory. At 168 lbs, this is my home that you’re knocking at.”

The Lion, Arslanbek Makhmudov, says he is ready to face the elite of the heavyweight division and intends to demonstrate it with his performance on October 10th against Dillon Carman. Well known to the Quebec public, the 6’5 ” Ontarian colossus overwhelmed Simon Kean in October 2018 before suffering the wrath of the “Grizzly” 6 months later in Shawinigan. However he was not impressed by the power of EOTTM’s protégé and guaranteed boxing fans fireworks: “Arslanbek, a Russian tough guy, right?! Perfect, you’ll see how it is! Don’t blink your eyes on October 10th! “.

Lexson Mathieu will face Ontarian Tim Cronin for the NABF super middleweight title. It will therefore be a significant step in the career of the young boxer from Quebec who has experienced dazzling progress since his leap among the professionals and wants to get down to business. “Cronin is a classic boxer: he has excellent reach from his 6’2 ” height, good movement and excellent distance control. He has a lot of experience but I believe that Lexson has all the tools to solve any problem he has in front of him,” notes his trainer François Duguay.