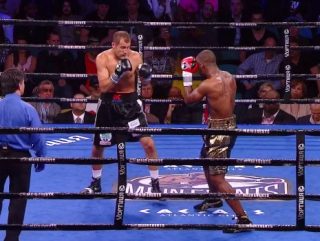 John David Jackson, the trainer for WBO light heavyweight champion Sergey Kovalev (25-0-1, 23 KOs), believes the best strategy for Kovalev to beat the 49-year-old IBF/WBA 175lb champion Bernard Hopkins (55-6-2, 32 KOs) in their fight on November 8th is for him to hit Hopkins everywhere – to his body, shoulders, arms and head. Jackson feels that this is the best way for Kovalev to wear the nearly 50-year-old Hopkins out to either score a knockout or win by a decision.

“I want him to hit Hopkins everywhere, his shoulder, his arms, body shots. Sergey is more athletic. He has power in both hands. He’s not robotic like Hopkins is. Sergey cuts the ring off. Bernard can’t match him power for power,” said Jackson via Fightnews.com.

LAS VEGAS (Oct. 31, 2014) – The stars of boxing’s present and future will be out in full force at the MGM Grand Garden Arena in Las Vegas on Saturday, Dec. 13, when Golden Boy Promotions in association with Khan Promotions and The Great Promotions present a SHOWTIME CHAMPIONSHIP BOXING tripleheader featuring a pivotal welterweight showdown and two world championship fights, live on SHOWTIME® (9 p.m. ET/6 p.m. PT).

PROVIDENCE, R.I. (Oct. 31st, 2014) — In what can only be considered a strange, ghoulish twist of fate during Halloween season, Shelito Vincent and Jackie Trivilino, who will slug it out for 10 rounds next Friday night for a world title, might be more inclined to bond over a mutual disdain for a certain undefeated New York fighter than trade blows with one another when the bell rings Nov. 7th.