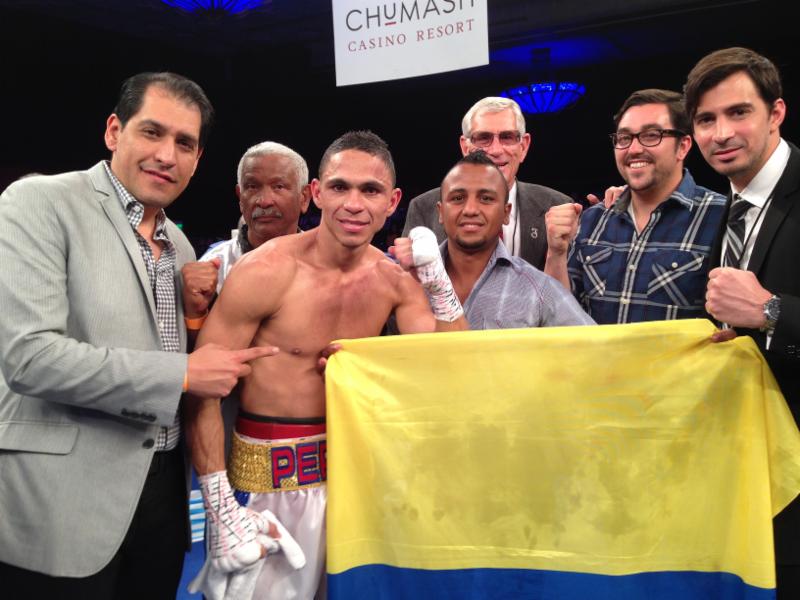 Columbian Perez was a class above his fellow 31 year old foe over the final half of the fight and punctuated a dominating performance with big rounds in eleven and twelve.

Peru’s Maicelo was competitive during the opening four rounds with his unorthodox movement and wide punches but once Perez established his led left hand he was able to control the action from center ring.

The more orthodox straight shots of Perez, who had a slight one inch plus reach advantage that was more effective as he fought out of taller stance, allowed him to beat the aggressive Maicelo to the punch and as the fight progressed the challengers’ habit of pulling back from punches and lack of fundamentals saw him constantly being back up and hit often.

Perez allowed Maicelo to get off first in the tenth and a right hand gained his attention. He got his left, either sharp jab or sweeping hook back on track punishing Maicelo in the final two rounds. He scored a knockdown in the eleventh when a hard right hand and left hook was followed by another clean right.

The final round was all the champion. Maicelo was clocked with some hard shots and showed his gameness in not going down. A right hand with ten seconds left in the bout punctuated a dominated defence by the talented titlist who was a lightweight quarter finalist at the 2008 Olympics being eliminated 13-5 by eventual gold medallist Aleksei Tishchenko and has only lost as a professional to Yuriokis Gamboa by a unanimous verdict eighteen months ago. He has won four since.

In a scheduled ten rounder on the undercard, Californian Francisco Santana (22-3-1, 11 kos) scored a one round knockout of previously undefeated Kendal Mena (20-1 11 kos) to pick up the WBA International welterweight strap. The Dominican Republic s Mena’s flattering record meant nothing in what was his first real fight. From the opening bell he was out of his league, showing little skill, crossing his feet and fighting with his hands low and chin up. Christmas came again for Santana. There were two knockdowns, the final, right hand left hook putting Mena out flat on his back. Referee Jack Reiss waved it immediately. Time 1.43. A good win for the impressive Santana who has now scored ten straight since dropping an eight rounder to Jermell Charlo in 2011.