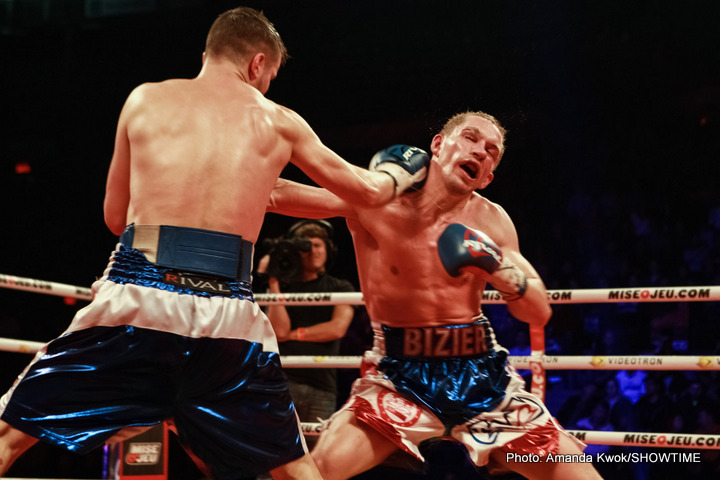 The early rounds were extremely close with back-and-forth action that could have gone either way. Bizier had his best round in the seventh, landing 38 punches to Dan’s 12 and flooring the Romanian for the first time since 2011. But the Quebec City native may have punched himself out, as Dan rallied and was the more active fighter from that point on. Dan landed 113 to just 78 for Bizier from the eighth through the 12th rounds.

“It was a very hard fight,” Dan said. “Kevin is a warrior. I did my best in the ring. I think I controlled the action and I think I won the fight. He changed a lot from the first right. He moved a lot, and he surprised me with that. He caught me, but I came up and I came up stronger. He spent all his energy to put me down.”

“Yes, of course (I’d fight Bizier again), but first I want to fight Kell Brook,” Dan said. “I hope we’ll make an exciting fight like this one.”

After the fight, Bizier (23-2, 16 KOs) was disappointed to again be on the losing end of a close split-decision.

“All the close rounds went to Jo Jo,” Bizier said. “We knew we had to win those last two rounds and I guess they gave it to him. When I hurt Jo Jo in the seventh I hurt my right hand. At that point, I was fighting with one hand.

“Let’s fight again. Why not? The first two fights were close. I don’t know why, but the judges just seem to give the close rounds to him.”