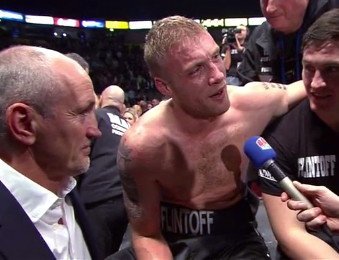 By Michael Collins: Making his debut tonight was 6’4″ heavyweight prospect Andrew “Freddie” Flintoff (1-0) who defeated American Richard Dawson (2-1, 1 KO’s) by a sloppy 4 round points decision on Friday night at the Manchester Arena, in Manchester, United Kingdom. Referee Richard James Davies scored the fight 39-38 for Flintoff in a close fight. Flintoff, a former English cricketer, didn’t show much in the way of power and he looked awful for the most part. I’m being kind. He looked worse than awful. Flintoff’s form looked wild amateurish to say the least. He also looked a little flabby despite being tall and slender.

In the 2nd round, Flintoff overextended himself after missing a shot and was knocked to the canvas by a straight left hand from Dawson. Instead of looking to finish off Flintoff after he got back to his feet, Dawson failed to throw any punches for the remainder of the round. It was very strange because all Dawson had to do was hit Flintoff one or two more times and he would have been down in out, but he did zero.

In round three and four, a tired Flintoff continued to rush Dawson while throwing wild punches in every direction seemingly without any sense. Many of the shots missed by a mile and Dawson just looked he wanted to survive. He probably could have knocked Flintoff out with one punch if he had the wherewithal to let his hands go, but he mostly just keep stepping back looking to avoid Flintoff’s wild shots.

Flintoff’s lack of speed, power, and boxing fundamentals will make it difficult for him to rise above the 3rd tier where he currently resides. You’ve got to have at least one of those areas going for you to make it o the 2nd tier, and Flintoff is missing all of those ingredients unfortunately.