But the hard hitting titleholder did not only rely on his power and high volume of punches. By constantly switching his target from head to body, he was eager to keep the challenger guessing as to where he would attempt to hit him next. Nevertheless, Bouadla was in no way willing to leave the battlefield without trying his luck. After being the victim of yet another flurry of hard punches during the third round, he decided it was time to start an attack himself. However, it was easy to see, that the man from Aulnay sous Bois, France had nothing to match the sheer strength of his opponent.

After some more or less slower rounds, Abraham turned up the heat once more in round seven. A lovely uppercut as well as a big straight right hand made it evident, that the WBO Champion was just too much to handle for Bouadla. Those landed punches resulted in a deep cut on the challengers right eye. The 30-year-old did make it through to the break, but in round eight, it was clear that the injury had a big influence on Bouadla’s vision, as he was not able to see Abraham’s punches coming. Hence, referee Mark Nelson made the correct call by taking Bouadla out of the bout after 2:11 minutes of the eight round and declaring the German as the winner.

Winning his 36th fight in Nuremberg meant a lot to the new and still world champion. “It was in Franconia where I picked up boxing. Therefore, there is no better feeling than being able to celebrate a victory with the fans in this particular city,” said Abraham who also had some kind words for his opponent. “He is one tough cookie who can take a punch, but 2012 was my year.”

Bouadla, who now stands at five losses out of 31 fights, admitted right after the defeat, that Abraham was just too strong for him: “He was just too good. It is as simple as that. The referee made the right call by stopping the fight. Abraham was very impressive with his power and didn’t allow me to land any of my counter-attacks.”

Moreover, coach Ulli Wegner explained why he kept praising Abraham throughout the whole time leading up to and after the fight. “I can only complain about Arthur if he gives me a reason to do so. Today he did everything I asked him to.” 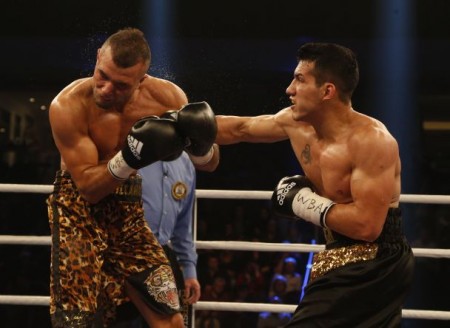 Also successful in his quest to defend his title was Jack Culcay, who still has an unbeaten record after 14 professional bouts. The 27-year-old took on Jean Michel Hamilcaro in a fight for the WBA-Intercontinental Light Middleweight Title. And Culcay made it clear, why he is regarded as one of Germany’s future superstars. The challenger from France did not stand a chance against the speed and power of Culcay. The referee stopped the fight in round five as Culcay proved to be too strong for his counterpart.

Winning his first important title was Mateusz Masternak. The Polish cruiserweight and Juho Haapoja from Finland fought it out for the vacant European Championship. Masternak was in total control throughout the fight and landed shots at will, but his opponent gave it his all and made it to the final bell. After 12 rounds, the judged submitted their scorecards and declared Masternak the winner by a clear-cut unanimous decision. All three scored the fight 120-108 in Masternak’s favour who now stands at 29 victories out of as many fights.

READ:  Jack Culcay back in action on June 12 in Berlin
Follow @eastsideboxing