Alycia ‘The Bomb’ Baumgardner travelled to England and produced a stunning knockout of hometown champion Terri ‘Belter’ Harper to claim the WBC and IBO junior lightweight world titles. It was a heavy pro-Harper crowd in Sheffield, but they were silenced as the American challenger dominated the fight from start to finish before referee Mark Lyson called a merciful end to proceedings in the fourth round.

IN THE RED CORNER – TERRI HARPER

After her first title win, Harper signed with Matchroom and defended successfully with a unanimous decision win over Viviane Obenauf at Manchester Arena.

Harper won further gold in February of 2020, outpointing Eva Wahlstrom to add the WBC world title, and in the process become only the second British woman to win a major world title after Nicola Adams.

The WBC title was defended in a highly entertaining draw with Natasha Jonas in what was the first ever all-British female world title match, before a 9th round TKO win against Katharina Thanderz in November 2020.

Harper suffered a broken right hand in the fourth round of the Thanderz victory, an injury that she would overcome to win, but also one that would linger for the following year. In May, Harper suffered another hand injury in sparring and was forced to withdraw from a unification bout with WBA champion Hyun Mi Choi.

Read:  Haney comparing himself to Mayweather, says he had more wins at 23

IN THE BLUE CORNER – ALYCIA BAUMGARDNER

Introduced to the professional game by the teaching of Marcos Dominguez in 2017, the hard hitting Baumgardner started off her career with four straight first round stoppage victories. Baumgardner would go on to build out her record to 6-0, including a victory over Nydia Feliciano that she trained for at Kronk Gym under the tutelage of Sugar Hill and Jonathan Banks before suffering a split decision loss to Christina Linardatou.

In an emphatic response to her first career defeat, Baumgardner bounced back by rolling over Gabriella Mezei in 68 seconds. Baumgardner would then cross paths with a trainer that would have a profound impact on her career, and went on to train with Ali Salaam for her unanimous decision win over Annette Pabello.

Salaam was the first to make Baumgardner believe that being world champion could become a reality, and even predicted that she would win the very same WBC belt that was held by Harper. In 2020, Salaam tragically passed away due to COVID-19 complications and left a devastated Baumgardner determined to fulfill his prophecy under the guidance of Ali’s son, LJ Harrison. The chance to fulfill that vision had now arrived.

During her ring walk, audible boos rang out from the home crowd as a beaming Baumgardner danced to the ring bedecked in the green and gold colors of the WBC world title belt she had come to collect. In contrast, a more stern-faced Harper marched to the ring in a black and gold robe to the backdrop of riotous cheers.

Baumgardner started the fight strongly, firing off strong jabs and moving her head off center to avoid any reply. Harper missed with her first significant punch of the fight and the confident Baumgardner smiled and had words for the defending champion, before dropping her hands and trying to draw in the English fighter.

The American challenger continued to snap out jabs to the body before tying up an advancing Harper in a clinch. Harper closed the distance and landed several blows to chants of ‘Terri’ from a roused crowd, only for Baumgardner to circle out of harm’s way and continue to land the better work for the remainder of the round.

Round two opened with Baumgardner flicking out a jab before beating Harper to the punch and connecting with a strong left hook. The American unleashed a flurry of punches on a stung Harper before wrestling her to the canvas with referee Lyson ruling no knockdown.

Harper returned to her feet but was soon on the receiving end of another assault from Baumgardner, who bloodied the nose of the champion with a series of stiff shots. A relaxed and confident Baumgardner swung her arms low to try and draw in Harper, but settled for picking her shots as the hesitant champion circled the ring with her back to the ropes. When Harper did close the distance, she was quickly tied up in a clinch by Baumgardner, forcing a separation from referee Lyson.

A tone of concern loomed over Harper’s corner between rounds, and rightly so given the lightning-fast start by the American challenger. “You look untidy and flat footed, wake up champ” were the words of Stefy Bull as he tried to rally the hometown fighter.

There was to be no respite however, as Baumgardner flicked out sharp jabs before connecting with a strong one-two combination to open round three. Harper threw out a strong jab only to receive four back from a now fully in control Baumgardner. The American challenger stood in range with her hands down, moving her head and showing no fear of Harper’s power or speed while closing out another positive round behind her crisp jab.

Harper stepped forward to apply pressure in the early stages of round four, but could not get past the jab of Baumgardner and the fight soon came to an almost instantaneous end. Harper stepped forward and was caught with a strong right hand that froze her in her tracks, leaving referee Lyson to step in and end the one-sided fight before Baumgardner could land an incoming left hook.

A dazed and dethroned Harper leaned against the ropes in the arms of referee Lyson while Baumgardner celebrated wildly with their trainer Harrison. The home crowd booed, but the emotions of Baumgardner and Harrison poured out as the pair had made the world championship prophecy of the late Salaam come true. Having been a literal father figure to Harrison, and a metaphorical one to Baumgardner, it is sure that Salaam was looking down on the new champion with pride.

A picture of confidence from the first second to last, Baumgardner expressed post-fight her unerring belief she felt ahead of and during this fight. “I dreamed of this moment, I looked in the mirror every day and I said ‘you’re gonna be world champion’,” said the newly crowned WBC queen.

Promoter Eddie Hearn expressed his disappointment on the behalf of Harper before stating that “tonight is all about Alycia, she’s announced herself into a thriving division.”

On the DAZN broadcast, former world champion Tony Bellew had words of praise for referee Lyson and his alert stoppage. “Terri Harper is asleep on her feet, and the second punch that Mark Lyson stops landing clean could have done real damage there. Mark Lyson deserves all the credit in the world for jumping in,” said Bellew.

“Anyone out there at 130 you know what time it is. I’m the top dog and you can come get this work,” was the clear statement of intent from Baumgardner post-fight.

If Baumgardner truly intends to clean up the division, a unification bout with Mikeala Mayer is the place to start. Ranked #7 on The Ring pound for pound list, 2016 Olympian Mayer currently holds The Ring, IBF and WBO belts for 130lbs and is fresh off an impressive points win over Maiva Hamadouche.

Other top end options for Baumgardner include a showdown with undefeated WBA champion Choi of South Korea.

Harper lives to fight another day and will likely be sure to heal fully before stepping back between the ropes. A rematch with Jonas to settle their unfinished business would be a tough and compelling return, or a title showdown with Choi could see her regain gold. 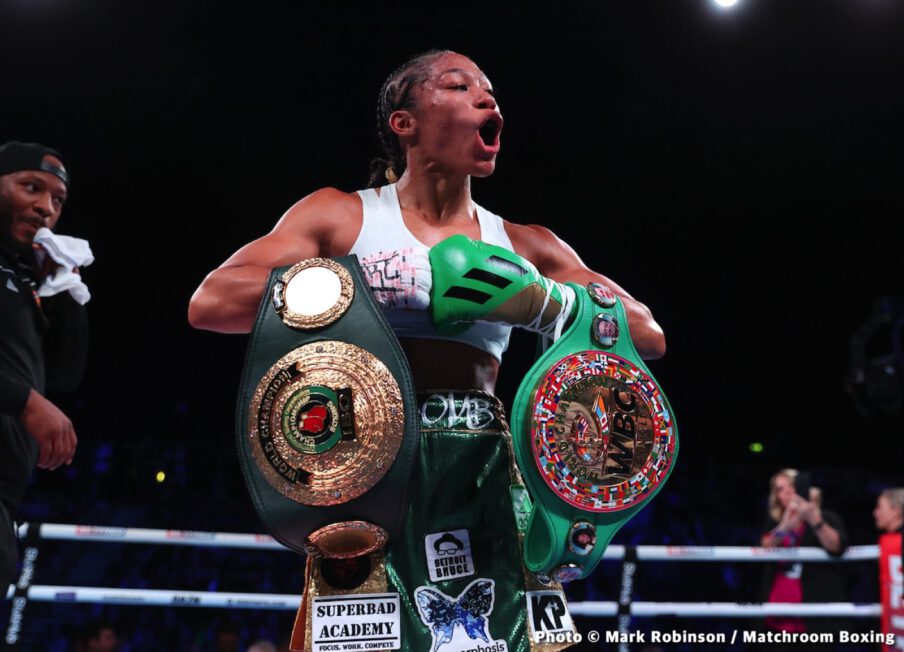 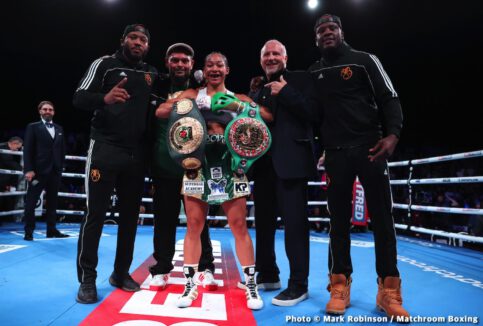 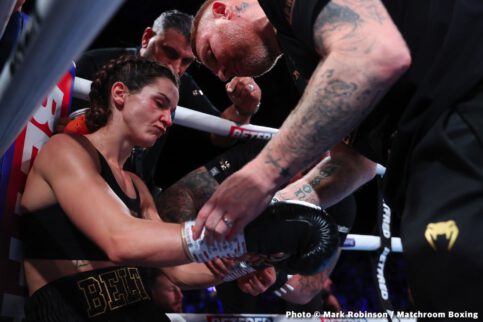 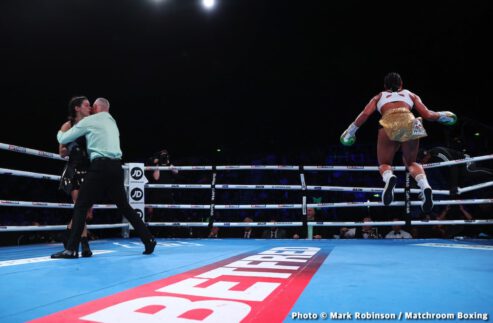 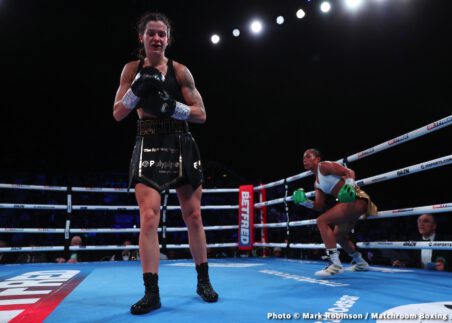 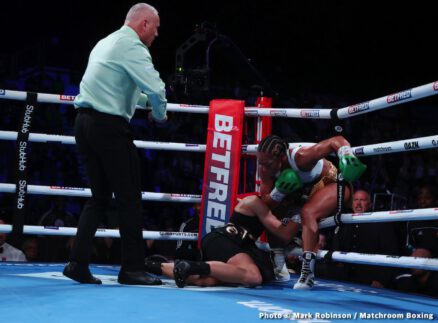 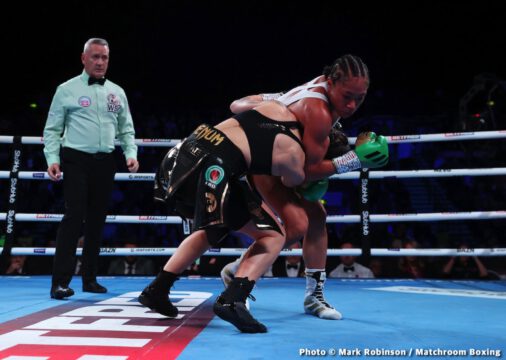 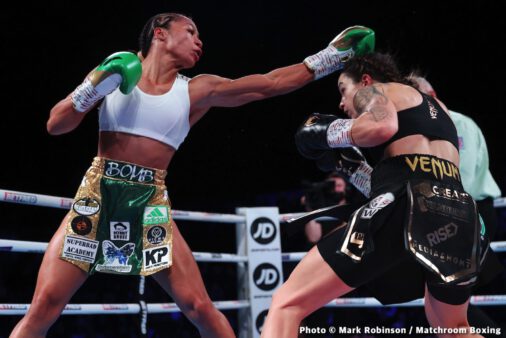 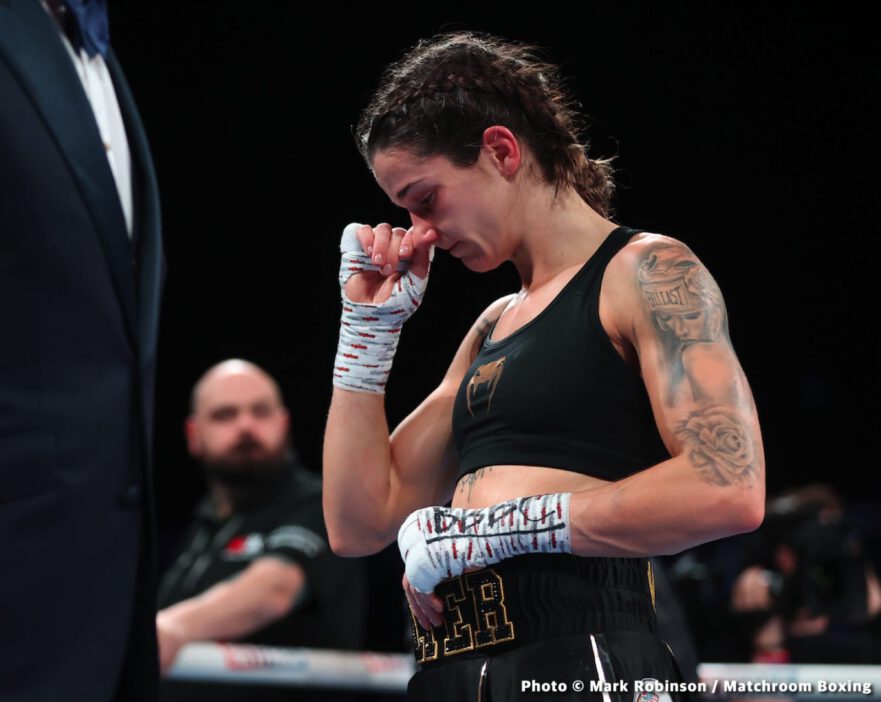 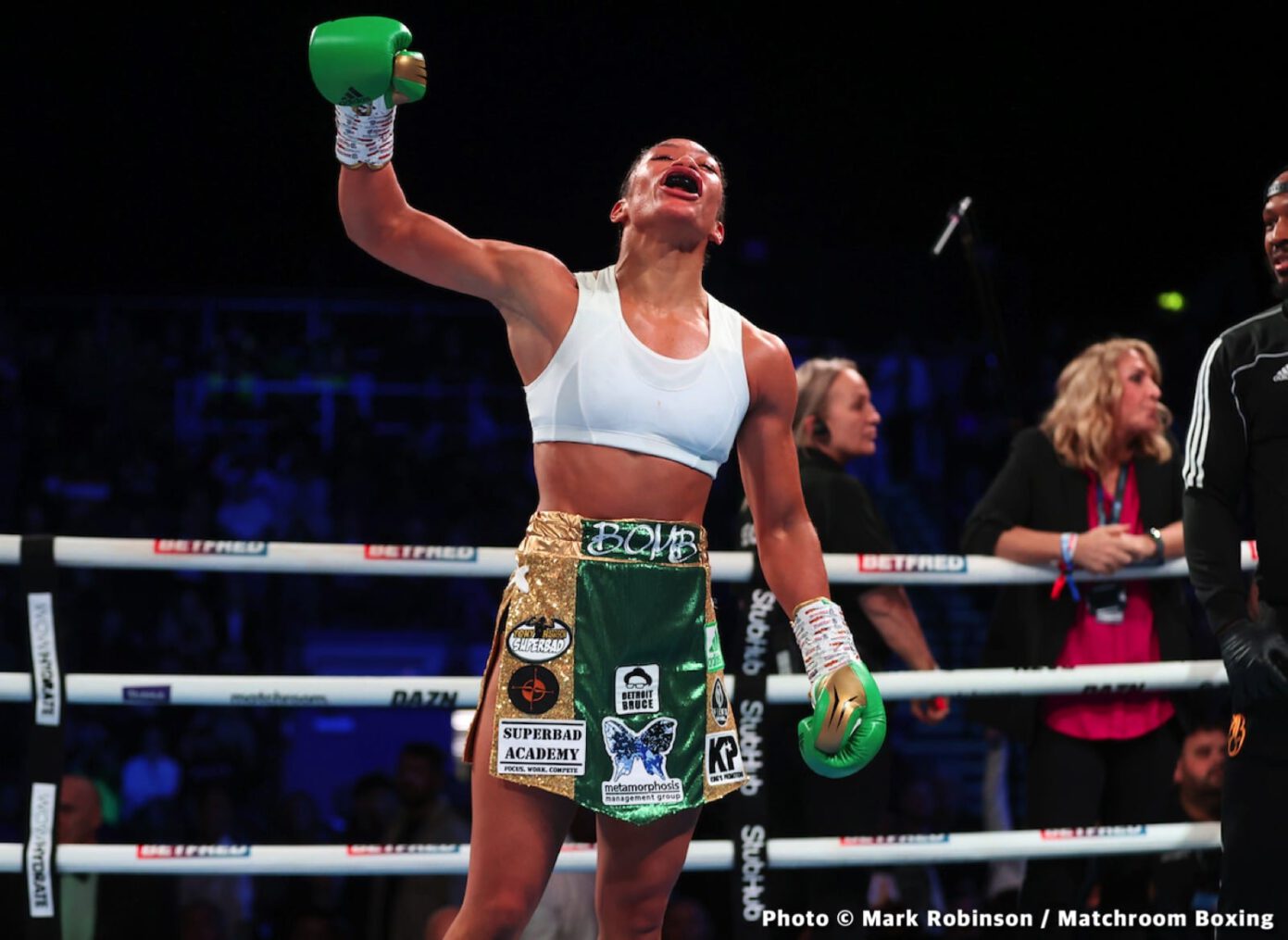