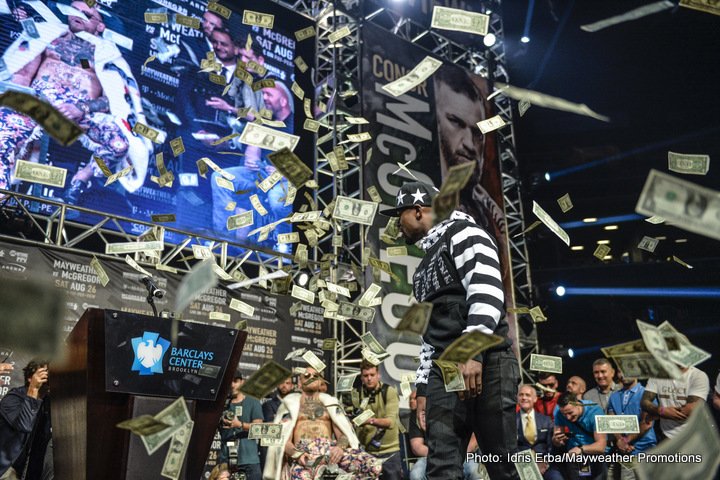 No wonder they call him “Money.” Leonard Ellerbe, Mayweather Promotion’s CEO, told MMAjunkie how Floyd Mayweather Junior will, in all likelihood, become a billionaire after all the revenue comes in from the heavily hyped Mayweather-Conor McGregor “Super-Fight” of August 26.

Mayweather, whose career earnings are said to be around the, quite staggering, $750 million mark already, are expected by Ellerbe to go over the $1 billion mark after the Las Vegas extravaganza. So, win, lose or draw on August 26 (Floyd will win; YOU can take it to the bank) Mayweather will be one incredibly rich man; THE highest paid athlete in all sports leaving all competitors in his wake (his nearest competitors being Michael Jordan and Tiger Woods).

“I think after this fight, he’ll be one of three athletes along with Michael Jordan and Tiger Woods to go over a billion dollars,” Ellerbe said towards the end of the four-day press tour Mayweather and McGregor took part in. “I don’t think he’d done too bad in his career.”

Not too bad at all. This talk of billionaire status comes hot on the heels of suggestions Mayweather has some money concerns in the form of unpaid taxes; with Floyd reportedly asking the IRS for time to pay his 2015 taxes. It is incredibly hard to envisage Mayweather ever, ever having a cash-flow problem, as lavish as he often is with his spending.

British heavyweight Anthony Joshua, the reigning and undefeated WBA/IBF champ, recently spoke of the bar being raised as far as how much a superstar, or potential superstar athlete should be looking to earn in his career. Joshua, as Mayweather soon will become, is aiming to be a billionaire. This is how much the sport has changed and how very much money there is to be earned from boxing these days.

Just imagine if true greats such as Muhammad Ali (who earned around $50 million from his ring career) and Sugar Ray Robinson (career earnings a “mere” $4 million) were around, doing their magic today.

As for Mayweather, ask him honestly, and he’ll tell you straight that winning his upcoming fight means so much more to him than collecting the money he will be paid whatever the result. As his co-trainer said recently, “losing is like death to him.”