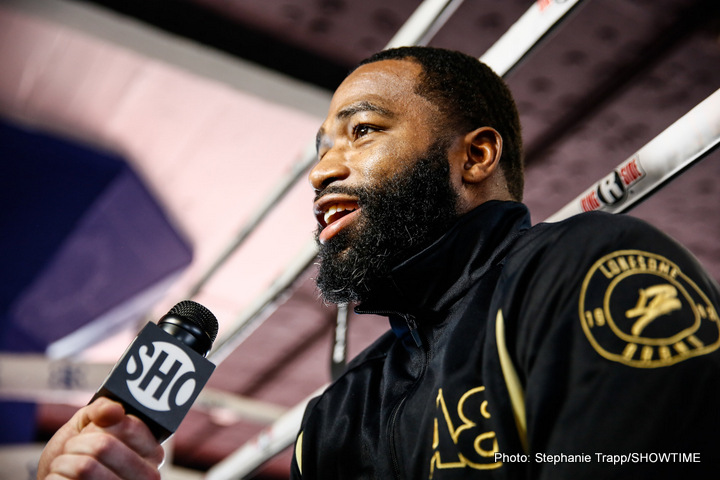 Just last week, Amir Khan put out a tantalising tweet in which he wrote how he has a “big announcement” that he will make in the coming days. As soon as fight fans read the message, speculation was rife on what the former 140 pound champion’s announcement might be.

Khan is, as we know, itching to fight again, for the first time since he was stopped by Mexican superstar Canelo Alvarez in a catch-weight affair that took place in May of 2015, and a rumour has begun circulating (via Boxing Planet and Boxing Kingdom) that suggests Khan will face none other than Adrien Broner this March. Khan did say a while back how he wanted his next fight to take place before his home fans in the UK, but money, and opportunity, talks. If Khan has been offered a big fight with Broner, of course it makes plenty of sense for him to take it.

Broner is a big name, he sells tickets, he has (still) some credibility and, perhaps most crucially to Khan, “The Problem” is not a savage puncher. Yes Broner can punch some, but he was far more effective a puncher down at 130 and 135 pounds. Up at 140 and even 147 where he has boxed on occasion, Broner is no destroyer. Details have not yet been made available – and the whole thing could be talk and nothing more – but if Khan fights Broner at 140 or 147, over ten rounds, the Bolton man has a helluva big chance to win.

Khan will be fighting ring rust when he returns, but if Khan has retained his speed and reflexes, he has a great shot at out-speeding Broner, of winning an impressive decision over him. If this turns out to be the case, Khan, while not scoring a massive win, will have put a fine comeback win in the bank – one that will no doubt get fight fans talking.

Broner, three years younger than Khan at age 28, last fought in July of 2017 when he was widely outpointed by Mikey Garcia in a 140 pound bout. Since then – aside from belting an unknown passer-by on the Vegas Strip – Broner has seen no action other than in the gym in training for his next fight. Might it be a fight against Khan he has in fact been training for?

Say what you want, but this one would be very interesting. And possibly a whole lot of fun.