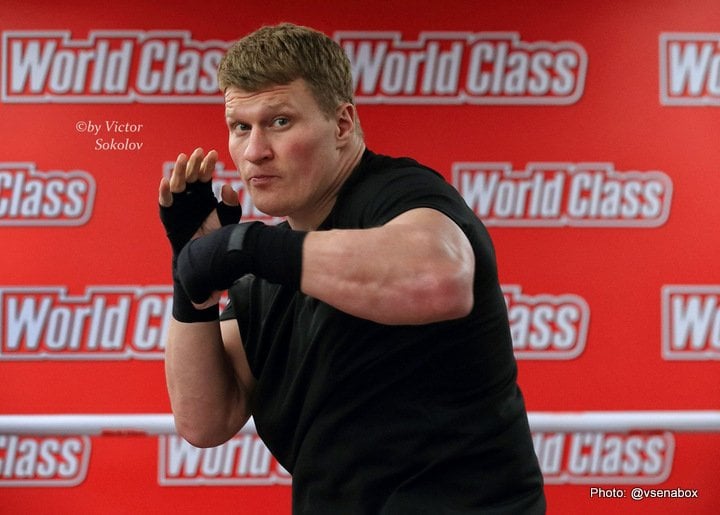 Russian warrior Alexander Povetkin was stopped for the very first time in his 13-year pro career on Saturday, with Anthony Joshua’s brutal punching power eventually, after a dramatic fight, proving too much for him. Not even Wladimir Klitschko was able to do what AJ did to (an admittedly 39 year old version of) Povetkin. If the former Olympic gold medal winner and former WBA champ did fight his last fight, he sure went out on his shield, the way the great, proud fighters are supposed to.

But Povetkin may decide to fight on. Still fast, still powerful and still as tough as they come, Povetkin would perhaps be able to defeat a number of top names/contenders – maybe even contest for a world title again in the future. This would seem unlikely, though, seeing as how WBC ruler Deontay Wilder’s dance card is all full right now (but looking back, what a great fight it would have been had Povetkin challenged Wilder a couple of years ago as he was all set to, only for the Russian star to blow it by testing positive for a banned substance).

Povetkin could, in theory, face a secondary champion, like a Trevor Bryan or a Fres Oquendo (or whoever it is that defeats Oquendo in the upcoming fight for the vacant “regular” WBA strap), and look to win a version of the WBA belt he once held – but would this be enough for the veteran who has always faced the best? Povetkin, 34-2(24) would be favoured to beat either Bryan or “Fast Fres,” but would he be interested in such a fight? Unless he needs the money or cannot resist the urge to stay in the sport the way so many former champions cannot resist the urge to stick around, Povetkin may well decide to call it quits.

A fine amateur, a world champion and a hero in his homeland, Povetkin certainly has accomplished a lot. The aforementioned Wladimir Klitschko aside, Povetkin tested Joshua harder than any other man ever has. And while it’s true the Russian puncher’s defining fights will be his two losing fights – to Wlad and to AJ – his head can be held high in retirement.

Povetkin came to fight and fight hard (and smart) on Saturday night, and for this we fans commend him. His gutsy effort almost makes us forget all about those two failed drugs tests. Povetkin, like Canelo Alvarez a week ago, regained his good name, at least to a degree, due to a heroic performance in the only place that matters where a fighter in concerned: in the ring.