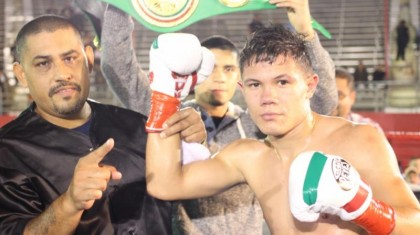 In the 10-round main event, fan favorite Alejandro Luna (16-0, 12 KOs) won by way of TKO after his opponent Daniel Attah (28-17-1, 11 KOs)could not continue after round six. Luna switching back and forth from southpaw to orthodox used a vicious body attack to control the action. Attah never landed any hard punches that could keep Luna off of him as Alejandro applied pressure throughout the fight. The fans were thrilled to see the referee stop the bout and raise the hand of their local hero.

“This was a good test to see how I could fair against a crafty veteran,” said Luna. “I applied a tremendous amount of pressure and eventually got him out of there. I knew my body shots were slowing him down so I continued to go to the body. I want to thank all my fans who came to see me fight tonight and especially my promoter Gary Shaw for giving me this opportunity.”

In an all action bout, Roy Tapia and Sergio Najera gave the fans in attendance a crowd pleasing fight. Tapia was loading up with power shots as Najera was countering with combinations. Both fighters were letting their hand go but it was Tapia that was landing the cleaner shots. Najera stood his ground and forced Tapia to go hard for the entire fight. Scorecards read 60-54 for Tapia.

Making their pro debuts, Myra Manzo and Edelma Jeffrey entered the ring with winning on their mind. Jeffery was doing her best to box from the outside as Manzo was walking her down. Once Manzo got Jeffery on the ropes she landed a flurry of hard punches and the referee stopped the bout at the 1:00 mark of round one. It was a good stoppage as Jeffery wasn’t throwing and punches after feeling the power of Manzo. Myra Manzo (1-0, 1 KO) defeats Edelma Jeffrey (0-1)

In an all out slugfest, lightweights Jose Garcia and Alejandro Ochoa let their hands go for four hard rounds. Both fighters were throwing wild hooks but it was Garcia who landed the money shots, dropping Ochoa in rounds one and three. Ochoa showed heart getting up off the canvas and never seemed seriously hurt. The fight went the distance and the scorecards read 38-36 twice 39-35 all in favor for Garcia. Jose Garcia (3-6, 2 KOs) defeats Alejandro Ochoa (3-5-1, 1 KO)