The inevitable was upon the boxing world; Muhammad Ali’s time was nearing a heroic end and the WBA title that he’d wooed the world over with in recovering from “Neon” Leon Spinks was soon to be up for grabs.

Still, Ali was riding high, prolonging his retirement and sitting on the championship as Bob Arum worked tirelessly to get the champ to officially vacate the title with a retirement letter. Before the coveted, official letter arrived in the mail, a four-man tournament was put together and mapped out for 1979, opposite the WBC championship exploits of Larry Holmes. 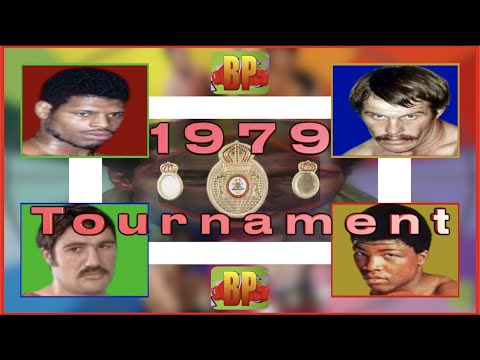 Speaking og WBA tournaments, deja-vu immediately sets in for the time period a little over a decade earlier in 1967, in which the WBA put on a tournament to fill the void left by, you guessed it, Muhammad Ali. In that particular case, Ali was the controversial, unbeatable, young champion who was forced into exile after refusing to be drafted for the Vietnam war under religious reasons. Jimmy Ellis would conquer the tournament and enter the 1970s ready to go to war for unification against Smokin’ Joe Frazier. Boxing fans at the very least, were hoping for history to rhyme, with the winner of this 1979 tournament going on to stage a big time unification affair with the Easton Assassin.

The four young lions, mentioned earlier, were John Tate, Gerrie Coetzee, Kallie Knoetze, and Leon Spinks. Tate was unbeaten, an olympian, and had just vanquished Duane Bobick to earn his spot. Coetzee, also unbeaten, was known for his famous bionic right hand, which was shrouded in controversy over whether it was an unfair advantage or not. Kallie Knoetze, tough as nails and unapologetic in his execution of the sweet science and life, was out for the big one. Leon Spinks, the former and final (as of that point at least), undisputed heavyweight champion, was primed to bounce back from the collapse to the shadow of Muhammad Ali.

Two of these challengers, Coetzee and Knoetze, were also attached to the blemish that was apartheid, South Africa’s great stain. Coetzee disavowed apartheid, but Knoetze, uhh, was neutral? He didn’t say he approved of it but he also didn’t openly stand against it. Both men were in the hot seat and practically no one outside of their countrymen wanted them to walk away with anything more than some cuts and bruises, certainly not the WBA title. The bracket was set this way:

#1 ranked Kallie Knoetze welcomed the challenge of #3 ranked John Tate on one end. On the other end, #4 ranked Leon Spinks took on #5 ranked Gerrie Coetzee.

The winner of each affair would fight for the WBA title finale, but would they really be able to fill the void that would be left by the departure of Muhammad Ali? Also, you may be asking who and where is the number 2 ranked contender? It was the Black Destroyer, Earnie Shavers, who found himself busy on the year with Ken Norton and Larry Holmes for the WBC championship. If he’d found himself in this eliminator series, would the Acorn have changed history and claimed a portion of the heavyweight title to add to his legacy? We’ll unfortunately never know.

More detailed cases of the four challengers, a more fleshed out background for the affair, and breakdowns of the three fights native to the tournament await you in today’s featured BoxingPedia production “1979 WBA Heavyweight Tournament”

This is a prelude to the impending Lost Generation docuseries, currently in production, covering the period of 1978-1988 in which the heavyweight division found itself unstable and outranked by the lower weight classes. More on that down the line, enjoy the show from my heart to yours. This has been TheCharlesJackson, author of the Boxing Encyclopedia, and I’ll see you next time.