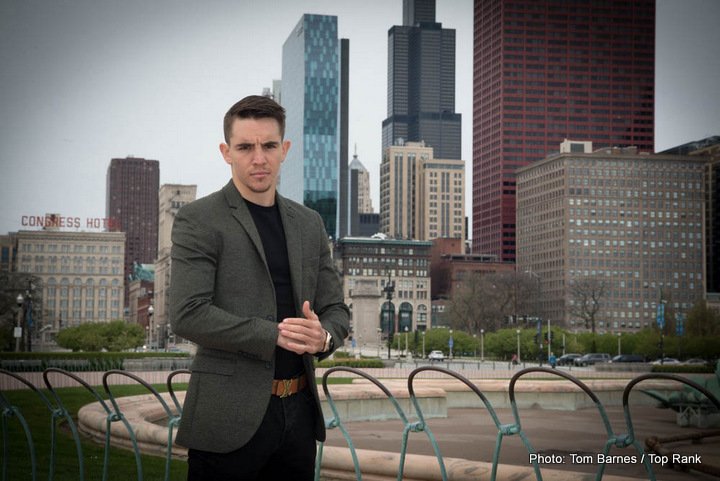 On the judging in GGG-Canelo:

“I don’t think Adalaide Byrd was watching that fight at all. She must have been in the changing room or something. I don’t know what she was doing, but she wasn’t watching that fight because GGG won the fight on my card. I give him about two rounds, possibly three rounds. But, at the same time, if it was draw, if it was 114-114, you’re not going to really argue really because it was a tight fight. But I definitely though he won (Golovkin).”

“With GGG, I think it’s a really terrible decision what happened because he’s 35, and by the time they fight again he’ll be maybe 36. And he’s getting on. He’s on the slide. And I don’t think Canelo will box him next. I think he’ll fight someone else and then fight him after maybe – when he gets a little bit older, and a little bit more sliding down.”

“And that was a career-defining fight for GGG if he had of got the decision. Still, you look at it and you say ‘who would you rather be after the fight’, and you’d rather be GGG, because everybody’s crying robbery for him, so he’ll make a lot more money now with the rematch. But I don’t think he wins the rematch.”

On how bad judging affects boxing:

“I think it’s a huge low- blow. It’s affected boxing more than McGregor-Mayweather affected boxing. I think it’s really bad that this has happened. And, you know, it’s ruined the fight for everybody. It’s ruined what a great fight it was, because it was a fantastic fight. Both guys showed serious chins. Both guys showed serious skills, so you can’t take that away from them. But, at the same time, it has been taken away from them when you look at it, because nobody’s talking about that. Everybody’s talking about Adalaide Byrd and her crazy scorecard.”

On if Canelo rejects an immediate rematch, does it hurt his popularity:

“I don’t know. I think after the fight he’s kind of came off a bit arrogant saying he thought he won by 8 rounds. I don’t agree there. And then obviously saying he doesn’t need to take the fight, which he does, and if you’re looking at it from a business stand-point you wouldn’t take it if you were Canelo because you’re still the big name in boxing. You’re still making the biggest money. And you can have that fight when GGG is a bit older, a bit less of what he is, and, you know, you can have a better camp again. He already waited for three years to fight him this time, so he’ll probably wait another year, year and a half.”

On Mayweather-McGregor – was he impressed with McGregor?

“I was impressed with him, you know, I’ll be honest. I kind of knew he was going to gas out when you seen the way Floyd was fighting. He was making him punch. He was putting him in positions where he thought he needed to punch but he didn’t need to punch. And he was just making him throw and letting him gas out. But, at the same time, he had great skills. He had great boxing skills at times. Great counter-punching, great speed, great timing. And that little upper-cut, when have you seen Floyd get caught with a nice little upper-cut like that. You never see it, so I thought he done well for himself, and he done well for his sport. But, at the end of the day, boxing isn’t MMA, so if he was going to lose he was going to lose. It’s a completely different sport. Like I say, I put my hands up and say fair play to him. He went in there and made $100m, he put on a good performance and done a lot better than the majority of the boxing world thought he was going to do.”

On his training camp for Friday’s fight:

“Yeah, I’m ready to rock,” he said. “The camp’s been tough, but it’s been good. It’s a camp where I felt I’ve learned an awful lot. And I feel this is going to be my best performance yet.”

“I think I can easily do the 10-round fight, now I haven’t really wanted to,” he said. “But, you know, it’s all about progression and taking your time in this game. There’s no rush. I’m young. And I’ve got time on my side. And with Top Rank as well – who know how to progress fighters at the right pace, at the right time – I just listen to them, and just listen to my team, and I’ll let them do all the hard work.”

On if he was surprised with the push he’s got since going pro:

“I knew that there was going to be a big push. It was St. Patrick’s Day. It was going to be in ‘The Garden’. It was Conor McGregor involved. And with everything that happened in the Olympics and stuff, so it all added up. And I wasn’t surprised with how big it was, no. But I was surprised by the atmosphere in the place. That was surprising.”

On if he was going for the Apollo Creed look in his walkout:

“That was my aim, you know. That’s what I looked at. I seen Apollo come out against Ivan Drago in Rocky 4, and I was like ‘I have to do something like this’. It was something I wanted to do and always planned to do. I was bloody planning my walk out since the day I turned pro!”

If he will continue to look for ways to entertain out of the ring, and if he believes that’s important:

“Definitely – 100%. I feel that’s a major part of pro boxing. You need to entertain people. And I feel like the walk-outs and stuff all add to it.”

On his fight with Kenny Guzman:

“On Kenny Guzman himself, I’ve only seen like a 40-second clip of him, so I don’t really know much about him. I know he’s undefeated. I know he’s going to come to win. I don’t care. I honestly don’t care what he plans to do, or what he wants to do, or what his record is. I’m going in there to do my job, and as you say: I’m not getting paid for overtime, so I’ll always aim for the KO.”

On the public announcement of his addition to the Lomachenko vs. Rigondeaux card:

On Lomachenko vs. Rigondeaux itself:

“Yeah, it’s something I’ve been looking forward to watching for so long, and the fact that I’m going to be fighting on the undercard is special. What a fight; two-time Olympic gold medallists, both fighting each other.”

Does he want to mirror Lomachenko and try compete for a world title early in his career:

“I’m in no rush. Lomachenko’s in a bit of a rush. He’s done two Olympic games, and he was a lot older than me at 26-27. And he was a two-time Olympic champion, so he obviously had top-top amateur pedigree. I had top amateur pedigree, but he was probably one of the best amateur boxers of all time, so I’m not going to say I’m in his league to jump into a world title fight within three fights. I can take my time. I’m young.”