Bernard Hopkins is best known for his body of work in the middleweight division. Hopkins won the IBF middleweight title in April 1995 when he beat Segundo Mercado by 7th round stoppage. After making a dozen title defenses over the next 6 years, Hopkins won a unification bout against Keith Holmes to win the WBC belt in April 2001.

In September of that year, Hopkins became the undisputed middleweight world champion with a dominant performance against Felix Trinidad, which added the WBA belt to his collection. Hopkins eventually went on to become the very first 4 belt champion in boxing history, when he defeated Oscar De La Hoya in September 2004. That victory made him the undisputed IBF/WBC/WBA/WBO middleweight world champion, making Bernard The Godfather of the modern 4 belt era. 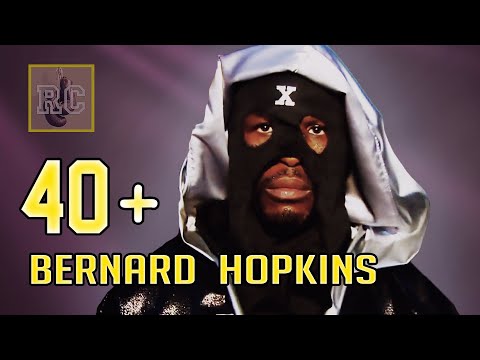 His middleweight reign of dominance ultimately came to an end when Hopkins lost back-to-back close decisions against Jermain Taylor in 2005. So at the end of the day, Hopkins had 20 consecutive successful defenses of a major world title, including 6 successful defenses as undisputed champion, and he was the first 4-belt undisputed champion in the modern era. When Hopkins lost his rematch against Taylor, Bernard was just a month shy of turning 41, and even though he was competitive in both of his losses against Taylor, where many people believe he deserved to win the rematch, it appeared this was the end of the road for The Executioner. Little did we know at that time, Bernard Hopkins would soon become a modern day Ageless Warrior in the footsteps of past greats like Archie Moore, The Old Mongoose himself.

This edition of Rummy’s Corner will provide a brief chronological overview of Bernard Hopkins’ career in his 40s at 175. Please watch and enjoy the video for one man’s opinion. This is Rummy’s Corner (produced and narrated by Geoffrey Ciani).