Big brother “heavyweight”. Little brother “light heavyweight”. Middle brother “cruiserweight”. Baby brother “middleweight”. There’s a considerable history between these boxing siblings, in particular, the journey of the “younger” brothers to escape the shadow of the “oldest” brother. The heavyweight division, even at its low points, is the marquee division and draw of the sweet science, casting innumerable shadows across the landscape of the sport. There are shadows within and outside of the division (as covered in the Shadow Champs documentary).

The sport of boxing has seen considerable evolution; heavyweights were once under the 200 pound limit, but such a thing is impossible these days with the invention of the light heavyweight and (more recently) cruiserweight weight classes. We’ve seen fighters from lower-weight classes take their leaps to the big league; many have fallen, but not all of them. 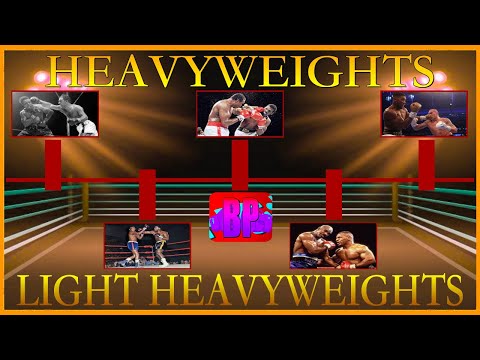 Today is all about the history of big brother vs little brother. The times in which the light heavyweight champion dared to challenge the heavyweight champion. By extension, the effort and exploits of the cruiserweights and middleweights who’ve done the same have also been included. This lineage goes all the way back to the black and white age in the day of the third-ever lineal heavyweight champion (to be, at least).

As mentioned, do pay attention to both the evolution and disparities in weight as the timeline goes on. You’ll be surprised how close and far off the fighters are in weight. Some rivals were the same weight. One had a disparity as large as NINETY-NINE (99) pounds! Other cases saw “little” brothers actually outweigh “big” brothers! Easter egg exploits, as are the usual with BoxingPedia, are showcased; who’s the lightest heavyweight champion ever? The heaviest? Which heavyweight conquered the most weight classes previously? Who overcame the biggest weight disparity? All these questions and more, answered.

At my own leisure, I’ve included bonus bouts that may not have had one fighter as a champion. Matches that may have had vacant titles up for grabs, included. Matches in which one or both fighters may not have been champion yet or in which one or more may have already been champion. For example, you’ll see the 1972 mismatch between Muhammad Ali and Bob Foster despite the fact that the Greatest wasn’t the heavyweight champion at the time (Joe Frazier had earned undisputed a year earlier in the Fight of the Century). There are a good deal more of “bonus” bouts that made the cut, which I believe you’ll enjoy.

Our lineage of cross (heavy)weight class matchups extend to last year with Oleksandr’s Usyk’s conquering of former unified WBA IBF WBO champion, Anthony Joshua. That matchup inspired the idea for this video, along with some of HBO boxing’s old-school 80s magic. The event I’m referencing is from the pre-fight showing for Larry Holmes and Michael Spinks’s 1985 clash in which the network chronicled the history of heavyweights vs light heavyweights in light of the impending matchup. Said matchup was also 30 years to the night later from Rocky Marciano’s 49th and final victory on a flawless career. Larry Holmes had the same opportunity, to the tee, and history would be made on the night (one way or another, considering the opportunity Spinks had).

Without giving away too much more, BoxingPedia presents: A Timeline of Cross (Heavy)Weight Class Title Matches

Written, narrated, and produced (from my heart to your’s) by TheCharlesJackson. Keep punching and stay frosty.