On Saturday night, US time, Anthony Joshua attempts to right a wrong in the rematch versus Oleksandr Usyk, streaming live on DAZN stateside. Can Usyk repeat his masterful display in upset fashion now being the favorite? Will Anthony Joshua be able to improve on his performance from the first fight? Can A.J. learn and apply the strategy his trainer Robert Garcia has been working on in training camp? Did Usyk put on too much weight looking to end this fight via knockout, as some in the media have speculated?

About 11 months ago, Oleksandr Usyk used his amateur and professional pedigree to fluster and eventually hurt Anthony Joshua late. Usyk took advantage of his speed and ability to use angles inside the pocket, which rendered Joshua tentative for too long of stretches. Anthony did manage to get back into the fight after starting slow but seemed to fade. The lack of urgency coming for Joshua and his team was head-scratching, as were the quotes every since the final bell rang. Almost unbelievably (almost because this is boxing, after all), the Joshua camp thought it would be a good idea to try to outbox a classical boxer.

This go around, there is no confusion about what version of Anthony Joshua is needed to have a real chance for victory. Joshua must be a pressure fighter willing to throw combinations to go along with a successful jab from their first fight. Attacking Usyk’s body will be a must in the same way Murat Gassiev did; even Oleksandr later admitted he was bothered by his body punches. Don’t get it wrong, AJ can’t focus too much on that area in fear of getting countered, but bodywork could help wear down Usyk and possibly create openings to the head. This boxing podcaster believes Anthony Joshua will have to hurt and/or drop Oleksandr Usyk to get his hand raised this Saturday.

For Usyk, it would be wise to try to duplicate the first fight bouncing in and out, landing lead or counter shots, all while controlling distance with his jab and footwork. If we do see a more aggressive Joshua, Usyk will have to make him pay in the form of flush counters shots. As well as lateral movement using pivots and/or quick clinches when Joshua gets up close. Heading into this rematch, expect a more confident fighter in Usyk, having already faced this foe prior. Also, given how he looked in his two previous heavyweight outings before the AJ fight. There are only two items that stand out on the Usyk side; one was his weight, and did he bulk up in his shoulders and neck as the rumors claim. Now that we’ve seen the weigh-in, it appears he’s basically the same weight as before. The other is his mental state pertaining to family and friends back in war-torn Ukraine, which could be a distraction or motivator.

Within, say, the 3rd to 5th round, if Anthony Joshua hasn’t shown a clear difference in approach, the scorecards will likely be wider this time for Oleksandr Usyk. Establishing his size and punching power will be a key for AJ in the opening frames. In short, AJ has to throw everything, including the kitchen sink at Usyk. Fighting at range will be more of the same so it’s essential Joshua closes the gap and throws combos. One thing for sure, if AJ is down late in the fight, Robert Garcia will let him know about it, injecting urgency we didn’t see last September. It will be interesting to see how many voices will be in Joshua’s ear between rounds.

This first meeting wasn’t an 11-1 or 10-2 whitewashing the way some folks in the media claim, but if AJ can’t close the gap and punish Uysk, the rematch may very well be a walkover. This longtime boxing fan sees Joshua having more success in the first part of the fight. However, Usyk has more paths to victory and has shown he can fight at range, on the inside, and out-boxing opponents on the outside. If it’s a tight fight, one can assume the “A” side will get the nod. Here’s hoping we get plenty of two-way action, but at the end of the day, I’m just not sold that AJ can make the necessary changes in one training camp.

My Official Prediction is Oleksandr Usyk by Majority-Decision.

Side Note: The Showtime Quadruple-Header has a new main event in Omar Figueroa Jr. vs. Sergey Lipinets. The undercard should pop with fights like Gutierrez vs. Garcia & Puello vs. Akhmedov. Also, all-action fighter Emanuel Navarrete takes on Eduardo Baez in the main event on ESPN. 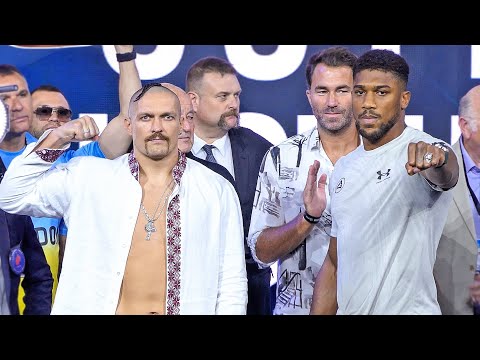