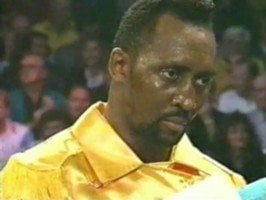 Grant, a leather-tough cruiserweight from Jamaica may only be known to hardcore fight fans, yet he did manage, along with his noteworthy win over a 40 year old Hearns, to win the IBF belt. The win over Hearns – in 2000, in what was planned to be Hearns’ swansong, and was dubbed “The Final Hit” – came about when Tommy injured his ankle during the second-round and was unable to continue.

Grant, though, insists today that Hearns “cried foul,” and “was not hurt.” Had the fight carried on, Grant says boldly, he would have scored the KO.

“Let me tell you, he cried foul in the fight. It was a good win for me, but I said before the fight that he would make an excuse for losing – the same way Mike Tyson did against [Evander] Holyfield. Hearns was not hurt, he was not injured,” Grant told this writer.

“Had the fight gone on, for absolute certain I would have knocked him out. That fight was his worst nightmare, because I was in the best condition of my life – and he knew it. I was ready to put it on him.”

This is of course debatable, but whatever the case, Grant deserves his respect, his recognition.

Interestingly, though Hearns would quite amazingly and unexpectedly fight again twice more, he never granted Grant a return bout. The loss of April 2000 is little more than a footnote in the glorious career of Hearns, but the fact is Grant is way more than that. At least he should be.

During his 20 year pro career, Grant fought no less than nine world champions and whole lot of top contenders. Finally, in June of 1997, after two failed attempts and a dozen defeats, a 36 year old Grant won the vacant IBF cruiserweight title with a tough majority decision win over Adolpho Washington.

Losing the belt in his next fight, Grant would go 9-4 after the Washington fight, before retiring with an overall record of 30-21(28) in January of 2004. Along with the win over Hearns, Grant picked up victories over Matthew Saad Muhammad, Washington, Robert Folley and Saul Montana. Grant also engaged in two excellent world title fights with Al Cole.

All in all, Uriah Grant deserves to be remembered.

“I love boxing, I eat, drink, sleep and walk boxing, and I am ever grateful for what boxing did for me,” a 58 year old Grant says today.

“But at the same time, it’s a dirty sport, it’s corrupt. I’m glad I got out at the right time, before I ended up brain-dead. I even tried up at heavyweight (losing to Chris Byrd and Brian Nielson via decision) but I was at my best at cruiserweight and in any fair fight, I won. I had to travel for all my fights. I have no real regrets, but today I don’t watch boxing as much as I used to. I want to open a boxing gym, but not in the U.S, hopefully in Jamaica. They just don’t train hard there [in the U.S] any more. We had it much tougher in our day. I’m just glad people remember me and my fights.”

READ:
Wladimir Klitschko: Wilder vs. Fury = 50-50 fight
Read: #MTKFightNight Kazakhstan Live Stream on IFL & ESPN+
Read: Where Does Manny Pacquiao Rank Amongst The Other Greats Who Were Still Fighting At 40 And Beyond?
Follow @boxingnews24