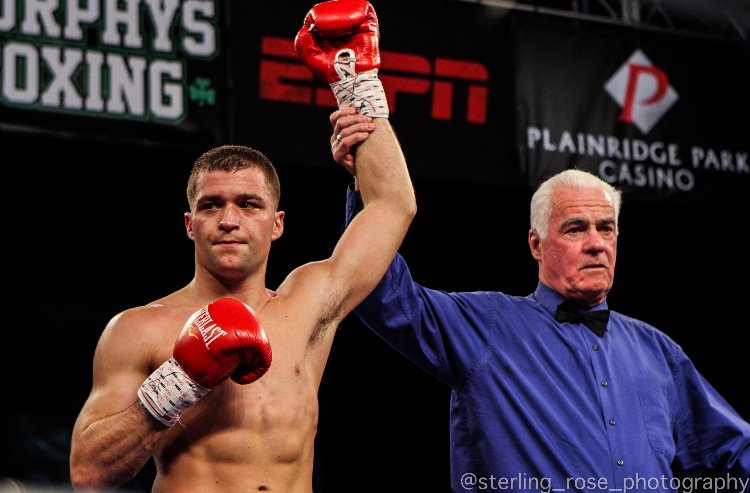 Super welterweight boxer, Joe Farina will put his undefeated record (2-0, 2 KOs) on the line this Saturday, June 30th at Mohegan Sun Casino in Uncasville, Connecticut in a four-round bout against Steve Moore, who is coming off a knockout victory in his last outing. The main event will be headlined by Joe Smith Jr. versus Melvin Russell.

“I have watched some tape on Moore, so I know that he has a lot of power, especially in his right hand, but I also know that he only fights in spurts, so if I fight aggressively, pressure him, effectively work my jab, and land hard body punches, then I should prevail,” said Farina.

The hard-throwing, aggressive, fan-favorite southpaw has gotten his boxing career off to a successful start with two consecutive victories. He has scored back-to-back knockouts in the third and second-round, respectively and has dominated both bouts before he ended them.

“When I am fighting, I am not looking for a knockout, it is something that just kind of happens,” said Farina. “If I see an opening or I can feel that my opponent is slowing down, I will try to end the fight, but if that does not happen, than I am prepared to win the bout on the scorecards.”

Two of the biggest factors that have played an integral part in Farina’s early success are his experienced co-trainers, John Curran and Eddie Ruiz. Curran was the trainer for former Canadian middleweight champion, Jacques LeBlanc who fought Roberto Duran and Vinny Pazienza and the cut man for former two-time junior middleweight world champion, Demetrius Andrade and Eddie Ruiz, who went to the National Golden Gloves as a super heavyweight. Ruiz was the brother of former two-time heavyweight champion, John Ruiz.

“Both John and Eddie have been in my corner since I was seventeen-years-old and they have always done an excellent job at getting me mentally and physically prepared to face my opponents,” said Farina. “They are a significant reason that I am a professional fighter today and any success that I have accomplished, I owe it to them.”

“Joe is an outstanding individual and an absolute pleasure to train,” said Ruiz. “He always listens to whatever John or I tell him and he works extremely hard whenever he is at the gym or running, despite that fact that he has already worked a full day by the time he starts training.”

In addition to boxing professionally, the highly disciplined and extremely hard working twenty-seven-year-old South Boston native works full-time (forty-hours a week) as a labor for the commuter rail, in order to financially support himself. He does his boxing training and workouts six-days a week, an hour in the morning and two-hours at night.

“It is extremely difficult to work full-time and be a professional fighter, however, everyone in boxing has a story and most of them have had to deal with a lot more trials and tribulations than I have, so I cannot really complain,” said Farina, “although it is always pretty embarrassing when I enter the ring with a farmers’ tan.”

Farina, who has gained invaluable experience by sparring with unbeaten, Andrade and rising New England contenders, Mark DeLuca and Ryan Kielczweski, wants to fight a couple more times this year. Over the next couple of years, he would like to work his way up to headline ten-round bouts for regional titles, and then maybe, box for a world title.

He had a short, but good amateur career in which he obtained a 38-9 record against some pretty good competition. Farina was the runner-up in a number of tournaments, including the New England Golden Gloves, a couple of years in a row. He was also among a number of American fighters that got selected to travel to Ireland to fight their best amateur boxers. Farina won the only bout that he fought via a third-round unanimous decision.

For more information on Farina and the latest updates on his upcoming bouts, add him on Instagram @JoeFarina1.

“Joe has great overall boxing skills. He has already demonstrated in his first two fights that he has a lot of power and an effective jab. Joe also has a fantastic ability to anticipate what his opponent is going to throw and quickly adjust to that,” said Ruiz. “I truly believe that Joe has a really bright boxing future ahead of him and fight fans should definitely come and watch him box this Saturday.”