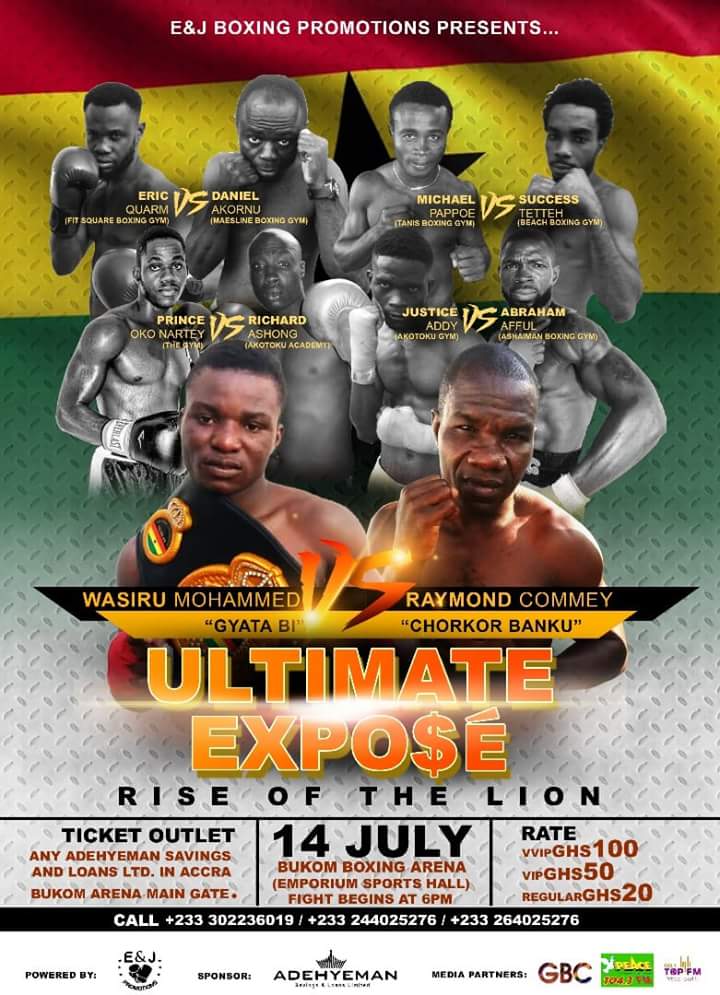 Promising Ghanaian boxer, Wasiru ‘Gyata Bi’ Mohammed faces the sternest test of his credentials on July 14 when he makes a first defence of the Ghana super bantamweight championship against old warrior, Raymond ‘Chorkor Banku’ Commey at the Bukom Boxing Arena in Accra.

Young Wasiru (10-0, 8 KOs) defeated Kamarudeen Boyefio on May 12 to annex the national belt, the first of his budding career and will now put it on the line against the vastly experienced Commey (18-6, 10 KOs), a former Ghana, West Africa and WBA Pan-African super bantamweight champion.

But young Mohammed and his team have codenamed the fight ‘Ultimate expose – rise of the lion’ in apparent statement that the man nicknamed ‘Gyata Bi’ which literally translated from the local Ga language means little lion will expose the ageing Commey.

“We are ready to dominate the division in Ghana and beyond. We will beat and expose Chorkor Banku then we will go after Isaac Sackey for the WBO Africa title,” Daniel Lartey, coach of Mohammed told Dornu’s Corner via Facebook.

Meanwhile, E & J Promotions who are stagingthe fight, have announced four pairings on the undercard of the show billed for the second Saturday of next month.

In other fights, Justice Addy (15-4-1, 14 KOs) takes on pride of Ashaiman, Abraham ‘Ebo Electric’ Afful (8-3-1, 8KOs) at welterweight whilst Eric Quarm and Daniel Akornu will slug it out at super featherweight to conclude the fight line-up.

Tickets are priced at GHS100 (one hundred Ghana Cedis) for VVIP, GHS50 (fifty Ghana cedis) for VIP and GHS20 (twenty Ghana Cedis) for popular stand and can be bought from all Adehyeman Savings and Loans Accra branches or at Bukom Boxing Arena main gate.