Tyson Fury says he’s serious about his fight with Dillian Whyte this Saturday being the last of his career. He’s no longer interested in fighting after 14 years in boxing, and he says it’s time to walk away at 33.

Fury (31-0-1, 22 KOs) states that he was going to retire after his last fight against Deontay Wilder, but then he got the offer to fight in front of his boxing fans in the UK at Wembley Stadium, and he wanted to give them a farewell. 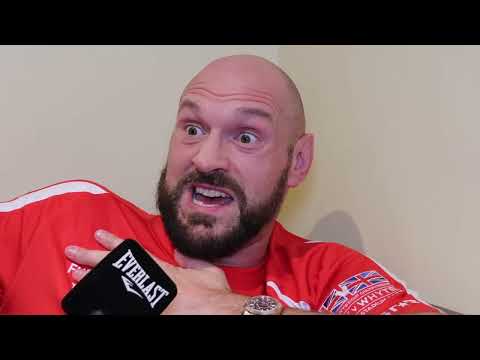 According to Fury, it could have been Anthony Joshua that he was fighting for the final time, but it didn’t happen. Joshua lost to Oleksandr Usyk and chances are he’ll lose again in July.

Fury says he has no interest in fighting the winner of the Joshua vs. Usyk rematch. Once he’s gone, he’s gone, that’s it. Tyson has obviously made a lot of money in the sport, so that makes his decision to retire easier.

With a net worth of $30 million, according to Celebrity Net Worth, Fury doesn’t need to fight anymore.

“It’s quite emotional, to be honest,” said Tyson Fury to Top Rank Boxing on Tuesday about him retiring after his fight this Saturday against Dillian Whyte.

“I know nobody believes me because they think I’m after money and whatever else,” Fury continued. “I’m walking away. I’ve got nothing to prove to nobody, and I’ve done what I’ve had to do, that’s it.

“Win, lose or draw on Saturday night, we’ll put up a good fight and go home, that’s it. That’s the way I’ve been feeling. Before the last Deontay Wilder fight, I was up in my room in Las Vegas, and I said, ‘This is it, this is the last one with Wilder.’ I said, ‘I don’t think there will be any more,’ and she said, ‘Thank God for that.’

“After the fight, we got the opportunity to do one at home with Dillian Whyte at Wembley Stadium. It’s an opportunity that you don’t pass up because it’s the capital stadium, and it’s a massive, massive event.

“Yeah, I was always planning on walking away, and here I am, walking away. As Julius Ceasar once said, ‘There will always be guys to fight.’ There are a million guys coming up.

“You can’t go on forever just like Wladimir couldn’t and Joe Louis, Mike Tyson, and Lennox Lewis before me. I’m going to go out with a bang. I’m going to put on a good show. Me and Dillian Whyte are going to knock lumps out of each other on Saturday night,” said Fury.

There’s a good chance that Fury will lose his fight against Whyte, as he’s facing a big puncher coming off of a brutal war with Deontay Wilder.

There are many boxing fans that believe the fight with Deontay took something out of Fury. Hence, he’s choosing to retire after that fierce battle. Wilder had almost knocked Fury unconscious in their first fight in 2018, and that had to be a scary situation for him.

Whyte is a dangerous fighter for anyone to face, but for someone coming off war as the one Fury did against Wilder, it’s very risky.

“Yes, I want a good fight. I want to test myself,” Fury continued. “I hope he doesn’t walk onto a big one and get knocked out cold. What have I got to prove? Keep fighting again and again and again.

“It’s not what the people want, it’s what I want. I do it for the fans, and I’m doing this fight here in Wembley. It’s one good farewell fight and goodbye. This stone is out of the blood.

“That’s the gospel truth. I have no interest in it, not at all. I’m here to do this one last fight. That’s me, I’m out. Goodbye forever. I want one more fight. It didn’t have to be Dillian Whyte. It could have been Joshua or it could have been Oleksandr Usyk, but the deal didn’t get made.

“It’s a good match-up. He’s [Whyte] been inactive like me. He’s only had one fight in over a year. I’ve won all the belts before. I have nothing to prove to anybody,” said Fury when asked if he’d like to fight the winner of the Anthony Joshua vs. Oleksandr Usyk fight.

Fury wants to go out with a bang

“I’ve done enough. Enough is enough,” said Fury. “You’re just going to see the same business from me. Give it my all and fight on until I can’t fight on anymore. Be victorious or not. You’re going to see a good fight, and I’m going to give it my all like I always do.

“100 percent I’m going to win because that’s all I do is win, win, win. If it’s supposed to be, I’ll be. If it’s not supposed to be, it won’t be. It’s been a great training camp. I started the first of January.

“I take them all serious. It’s been a great journey, and I wouldn’t have changed it all. It’s been great. A big shout out to America. They took me in as one of my own, made me a big superstar in the States, and made me very, very welcome.

“I do believe we’ll never see Las Vegas on wheels when the Gypsy King fought Deontay Wilder 2. It was one of the busiest weekends in Vegas that I have ever seen,” said Fury.

Ideally, Fury will win this fight by a knockout, and leave the sport on a positive note on Saturday night in front of 94,000 fans at Wembley Stadium. Whyte obviously has plans of his own, and he wants to be the one that has his hand raised. 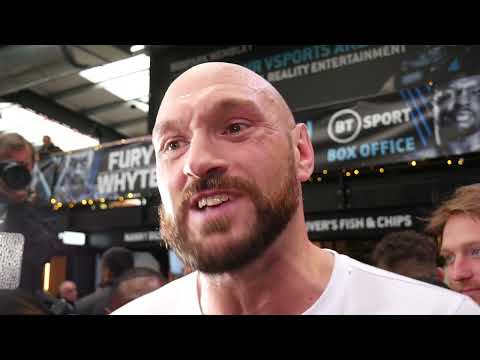