WBC heavyweight champ Tyson Fury released a short video onto social media some hours back and as usual, the self-styled “Gypsy King” had nothing at all good to say about Anthony Joshua. Or about Oleksandr Usyk. In fact, Fury perhaps crossed the line in flatly referring to Usyk, the current WBA/IBF/WBO heavyweight champion, as a “little steroid man.”

Fury, wearing his game face, laid into Joshua for allowing the so-called “little steroid man” to beat him back in September of last year. Fury says it is now his job to go and get the belts back from Ukraine.

“You know what I can’t believe, that AJ has gone and give Ukraine all the heavyweight belts back after all my hard work of relieving ’em. You big useless dosser,” Fury said. “You’ve let a little steroid man come up from middleweight and set about ye and take all your belts.

But it’s gonna take a real Lancaster bomber like me to go and relieve the little sted-head of the belts and get ’em back to Britain. You’re useless dossers, honestly. Bring ’em to me, the Gypsy King, and I’ll put ’em in their place. I’ll relieve ’em of the belts again.”

Read:  The Final Pound-For-Pound Rankings Of 2022 – Who Ended The Year As The Man?

Currently, Fury has no next fight signed and sealed – will it be Dillian Whyte, will it be Francis Ngannou, or will it be someone else? Fury says he will be fighting in March regardless. But as for Usyk being a steroid user, Fury, even if he was speaking in jest, has certainly ruffled some feathers with his accusation. It’s no little thing to accuse a fellow fighter of having taken illegal substances, especially when you have zero proof or even any reason to suspect the fighter in question of any wrongdoing.

It will be interesting to hear Usyk’s response, should he make one (Usyk may just laugh off Fury’s buffoonery). But in some ways, Fury’s words make a Fury-Usyk showdown that much bigger. Usyk, 19-0(13) did box as a middleweight, at amateur level in 2006, yet he has since built himself up to cruiserweight and then heavyweight, and he has done it with hard work and effort – not by cheating.

Some good judges think Usyk is all wrong for Fury, 31-0-1(22) and that he may well beat him if and when they fight. What would Fury have to say to the “little steroid man” in such an event? Leave it to Fury to stir things up. 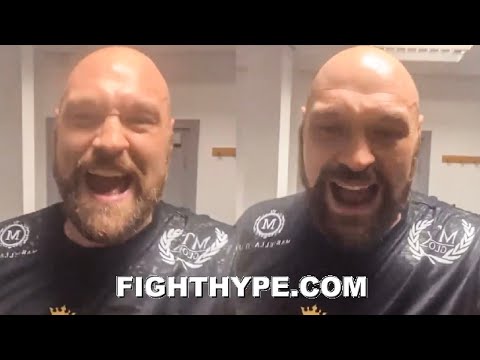