Tyson Fury has turned into a puncher; a fighter who looks for the KO, not the points win. Having been with ace trainer Sugar Hill for some months now, Fury is no longer the herky-jerky, feint-a-lot fighter he was when he dethroned Wladimir Klitschko.

We all laughed when Fury said he would go right at the feared Deontay Wilder and knock him out quickly in their February 2020 rematch, yet Fury was as good as his word. And the power Fury showed in the third fight with Wilder was impressive.

Now hungry for knockouts, hungry to destroy his challengers, Fury is looking forward to “knocking Dillian Whyte out cold” when the two clash in April. Speaking with The Unibet Lowdown, Fury said he will take Whyte out with a right hand.

“I’m going to knock him out – it’s going to be the right hand that does it,” Fury said. “It will be a good fight while it lasts. He’ll come forward, he’ll be game and he’ll swing away with some big swings and miss them. I’ll detonate a big right hand and knock him out cold.”

If Fury is bang on right with this, his latest KO prediction, we will have to give him even more credit and acclaim. Of course, Whyte, 28-2(19) can bang himself, and maybe one of those big swings will not miss, instead of finding its target. Fury can be hit, we know that, and there is a chance that the third, at times fierce Wilder battle took something from Fury.

Fury, though, disagrees with those people who say Whyte has been avoided, by Wilder and by other top heavyweights.

“I don’t believe he’s been avoided,” Fury said of Whyte. “Don’t be daft [about Wilder having avoided Whyte] – he would put his fist through the back of Dillian Whyte’s face. Who avoided him? He was offered the shot at Joshua, the rematch. He was offered a shot at Andy Ruiz and Luis Ortiz and turned that down. He didn’t even want to fight Otto Wallin – if anything he avoids everyone else.”

Fury, 31-0-1(22) is a big favorite to beat Whyte yet some good judges feel it will be a hard fight for the WBC champ. Where does Fury rank Whyte as far as his most dangerous career opponents?

“I would probably look at Wilder, then Klitschko, then Dereck Chisora, then probably Otto Wallin, and then Steve Cunningham,” Fury said.

Interesting stuff, with Fury rating Wallin so high. Is Whyte a more dangerous challenger for Fury than the tall Swede was? Some fans will likely say so. Whyte is fully expected to bring the heat and give it his all when he fights Fury. A distance fight does not look at all likely.

Is Fury correct, in that he will take Whyte out with a big right hand? Who out there is willing to disagree with Fury after he has proved us wrong so many times? 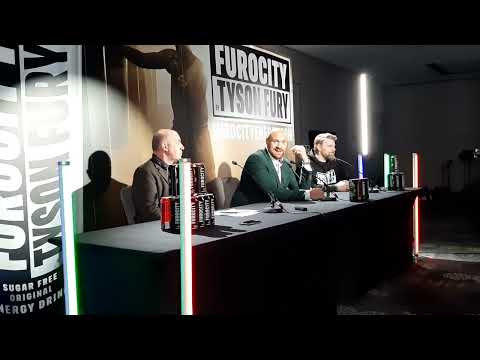