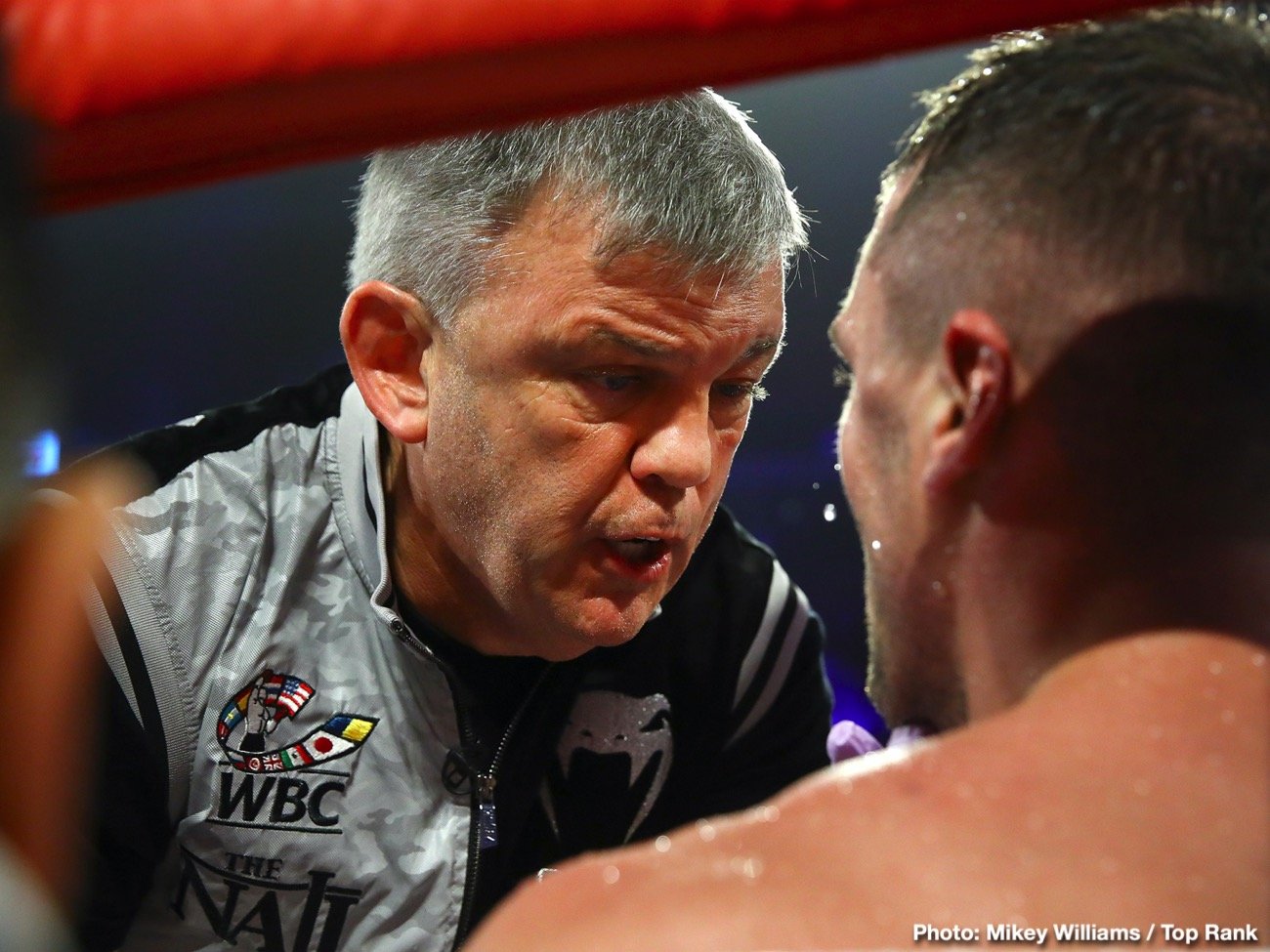 The wild tumultuous life of boxing trainer Teddy Atlas is recounted with brutal honesty in his 2006 autobiography “From The Streets To The Ring A Son’s Struggle To Become A Man”.

We first meet Atlas as a “hellbent for danger” delinquent on the streets of Staten Island with an arrest record that showed a complete disregard for the laws and rules of civil society. He found partial salvation as a boxer; and then as a trainer when a back injury cut his fight career short.

The chapter titled The Murder In My Heart delves into an area Atlas has not discussed on his You-Tube broadcasts. It concerns his tense and draining relationship with Canadian boxer Donny Lalonde, especially the fallout from their parting that would elicit even more bitterness and rage than his disgust over Mike Tyson’s infantile and repulsive antics that spelled an end to his tenure as Tyson’s trainer. Cus D’Amato, who took Tyson’s side in all the disputes, would anoint Kevin Rooney as Tyson’s new trainer in 1983.

Atlas was hardly impressed when Donny Lalonde phoned him in the mid-1980’s. Other than dubbing himself “the Golden Boy”, Atlas found little to recommend the Winnipeg native. “No I won’t train you” Atlas insisted.

Lalonde kept badgering Atlas to train him, so Teddy decided to defer judgment by inviting Lalonde for a lookover at Gleason’s Gym in the Bronx. Atlas was finally won over by Lalonde’s mindset: “He was saying the right things to keep me listening.”

Despite a bad left arm from a hockey injury (Lalonde had a shoulder pin), Atlas decided to take him on. Then Atlas made a grievous error by recommending Dave Wolfe as Donny’s manager, even though Wolfe told him: “This guy’s nothin’, what are you wasting your time for?”

Atlas countered with: ‘Michael Spinks is about to give up his light heavyweight title, and that’s gonna open up three titles…and after I train this kid for awhile, I think he can figure in the picture. He can punch and he can be marketed, and if he’s managed in the right way, he can be moved into one of those spots because it won’t be a great guy in there.”

They shook on it.

Wolfe, who had guided Ray “Boom Boom” Mancini to the lightweight title in 1982, agreed to manage Lalonde – albeit Atlas noticed a flaw in Lalonde’s character when Donny admitted considering a well-known mobster as his manager: “You sign the f$#n’ agreement with him (Wolfe) tomorrow or get another f*^%n” trainer and get the f&^k” out of my life.”

Dave Wolfe would eventually screw Atlas over for a bundle. Before that happened, Teddy had devoted two years building up Lalonde’s confidence, teaching lots of technical stuff, spending hours and hours a day working on his left hand, showing him how to not to pull straight back to get away from punches, and turning him into a more complete fighter. Atlas made a lot of sacrifices for Wolfe and Lalonde, and got little recompense for his time and efforts.

Atlas arranged two confidence-building bouts in Oklahoma against stiffs with winless records. Both Ronnie Crawford and Roberto Rodriguez lasted two rounds until the ref decided to put a halt to their suffering.

Here’s Atlas describing the aftermath of the Roberto Rodriguez beatdown: “I felt sorry for the poor guy and because I knew what he had gotten paid that I went back to the locker room after Wolfe and Lalonde packed up, and we were leaving and I gave him twenty dollars. I never told them what I was doing because they would have looked at it as weakness. I think I just said ‘I forgot something’ and went back to the locker room, and the guy was sitting there, still bleeding from a cut over his eye. He looked at me like I’d lost my mind. He had kids at home. I saw them at the weigh-in. He even had to borrow another guy’s cup. It was sad. Twenty dollars wasn’t much but it was all I had.”

When he returned to New York, Atlas was called as witness in a breach of contract suit launched by Wolfe against Canadian fighter Donnie Poole. After a few routine questions, Teddy was stunned as he got ambushed by a question that came from out of the blue. Wolfe’s lawyer: “Isn’t it true that the real issue here and the real problems the reason we’re here, is that Donnie Poole asked Dave Wolfe to get drugs and Wolfe refused?”

At that precise moment Atlas began to fathom Wolfe’s treacherous nature, and refused to endure any more of the proceedings. Poole, much like Lalonde, had suffered an injury from a hockey mishap (a fractured kneecap) and got addicted to the powerful painkiller Percocet. Wolfe knew about it because the kid had been honest with him. By the time Atlas accused Wolfe’s lawyer of lying, the courtroom was in uproar. Atlas walked away, knowing they were about to take Lalonde from him. There were no subtleties to this devolution; it wasn’t complicated.

After sacrificing two years of his life into making Lalonde a decent fighter and top-ranked contender, it was devastating to realize Lalonde had shafted him by figuring it was easier to go with Wolfe. Adding to the regret, Lalonde had passed on lucrative opportunities to work with boxing manager Josephine Abercrombie: one of the richest women in America. Atlas chose to stay loyal to Wolfe. Atlas also turned down blandishments from the Duvas to train their stable which included Vinnie Pazienza, Meldrick Taylor and Pernell Whittaker.

In 1987 Lalonde fought for the vacant WBC light heavyweight title against the aging Eddie Davis who had done little of note since a 1985 loss to ex-champ Marvin Johnson who was one the downside of his career.

Atlas admitted: “Dave Wolfe was smart. He managed Lalonde beautifully, matching him against the right guys. He orchestrated his career like a maestro.”

Meanwhile, waiting in the wings was Sugar Ray Leonard who saw in Lalonde an opportunity to add a third crown to his mantle of titles in the welterweight and middleweight divisions. Lalonde got six million for the November 1988 tilt Vegas which he lost on a ninth round TKO. Teddy’s share would’ve been six hundred thousand dollars. This devastated Atlas even more than what he’d endured from Tyson. “I had sacrificed for him and in return he betrayed me. The idea that he should be rewarded for that? It made me murderous.”

This unhinged mindset endured through a cold rainy December day in 1988 when actions got underway to pull off the deed. A gun was hidden in Atlas’s waistband. He feigned a friendly voice to convince the lady superintendent to buzz him into Lalonde’s apartment building. Atlas knocked on Lalonde’s door and pulled out his gun. “Only he wasn’t home. Thank God.”

Atlas persisted; and later at 2 am phoned Lalonde’s apartment. Donny’s girlfriend confirmed his presence. Atlas hung up and started walking toward his dark tryst with destiny. Then he started having reservations: “I was thinking that I was probably going to kill her (Lalonde’s girl), because I couldn’t be seen. If Lalonde came to the door, I could shoot him and maybe I wouldn’t have to kill her.”

“The more I thought about it the more it bothered me. Thinking about Lalonde’s blonde girlfriend, I flashed on my beautiful five-year old daughter Nicole. Then I thought about my son.”

Such thoughts convinced Atlas to abandon his homicidal plans.

As a boxing trainer Atlas is considered an exceptional judge of human character, but he never came to grips with his own inner demons. At least until that cold rainy day in December 1988.

Gary Tate (aka Shakey-T: The Rajah Of Rockabilly)