Tony Bellew scored his 2nd knockout over David Haye in the last 14 months as the former star of “Creed” scored a 5th round stoppage in a battle of former world champions at the O2 Arena in London.

The Epic rematch was shown live and exclusively in the United State on AWE-A Wealth of Entertainment and www.klowdtv.com

Haye came out Early and landed a couple of right hands. After that it was all Bellew in a big way, as in round three, Bellew scored two monstrous knockdowns. the 1st one came from a huge counter right hand. Moments later, it was a smashing left hook to the jaw that sent “The Hayemaker” to the canvas.

Bellew continued to dominate, and in round five, Bellew landed another head turning left hook that sent Haye to the deck for a third time. Bellew ended the fight by landed two hard punches on the ropes, and the bout was stopped at 2:14. 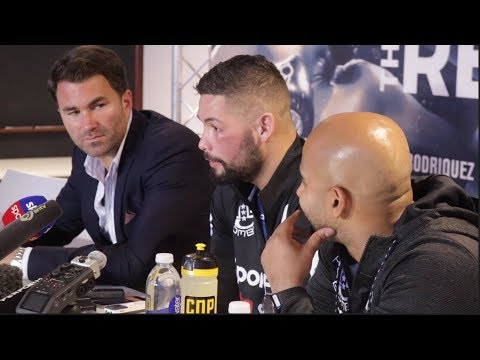 Ryder landed a right to head that Cox went down after a delayed reaction. Cox got up just as referee Ian-John Lewis reached the count of 10 and the bout was called at 50 seconds in round 2.

Emmanuel Rodriguez won the IBF Bantamweight title with a 12 round domination of Paul Butler.

In round one, Rodriguez landed a perfect left hook that deposited Butler on the canvas. Seconds later it was a flurry of shots to the head that put Butler down again. In round three, Butler began to bleed from the nose.

Rodriguez coasted home by boxing and moving for which Butler had no answer for the skilled Rodriguez.

Butler was ineligible to win the vacant title as he checked in 3 1/2 pounds over the 118 pound limit.

Buatsi dominated the fight and then landed a huge combination that hurt Cuevas at 50 seconds of round five.

James Tennyson survived a 2nd round knockdown, and came back to defeat previously undefeated Martin J Ward via 5th round stoppage in a terrific action-packed super featherweight bout.

In round two, Ward dropped Tennyson with a crunching left hook to the body. In round three, Tennyson started to bleed from his nose.