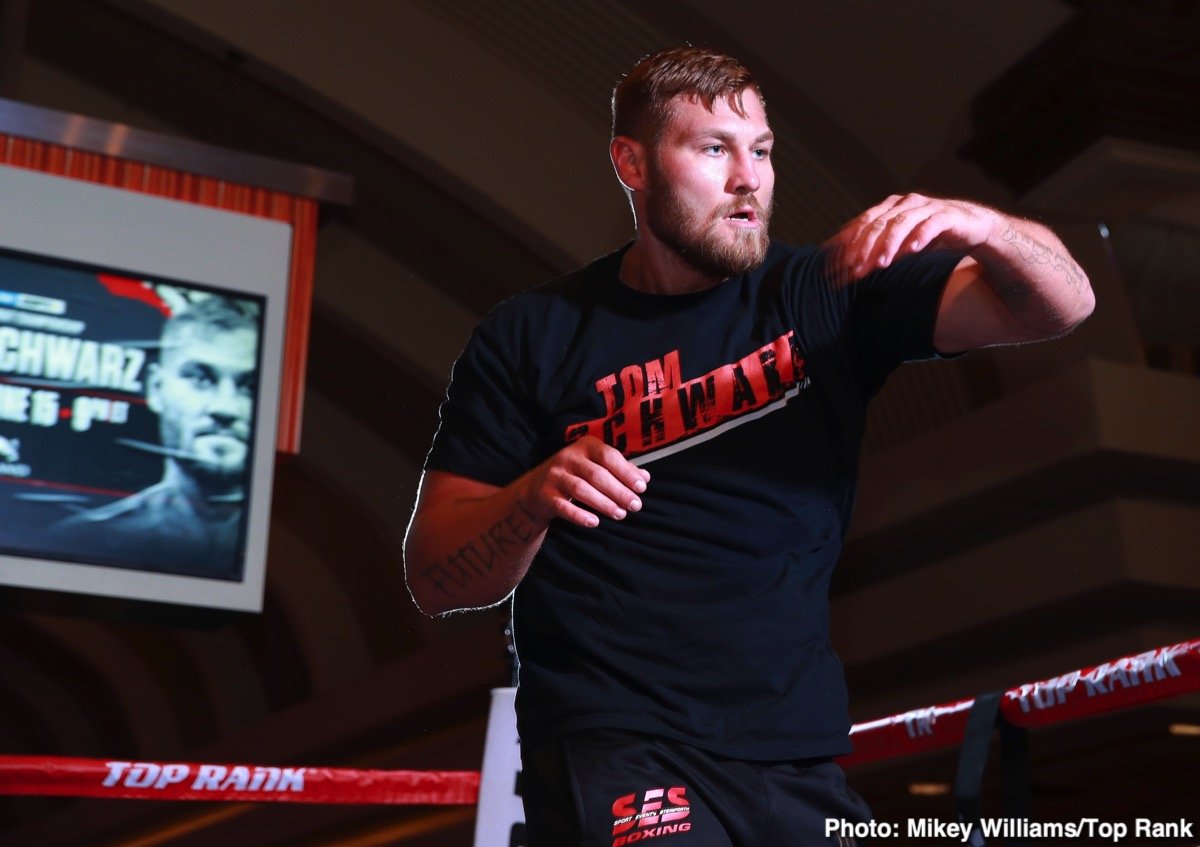 If we go by the numbers the odds-makers put out – numbers they cannot afford to get wrong too often lest they go out of business – Tom Schwarz has more of a chance to beat Tyson Fury than Andy Ruiz had of dethroning Anthony Joshua. Ruiz, in some places a whopping great 30-1 underdog when entering his June 1st challenge of WBA/IBF/WBO heavyweight champ Joshua, proved in dramatic fashion how the odds mean next to nothing when two fighters climb into the ring; especially when it’s two heavyweights who are fighting.

Now, the unbeaten but untested Schwarz is paying no attention to the 12-1 odds he has been placed at the short end of. In fact, the German is carrying with him into the ring some extra confidence due to what Ruiz was able to do just under two weeks ago. Speaking with Ring.TV.com, Schwarz, 24-0(16) says he does not care one bit about what the odds-makers or the boxing experts says, and he points to a tattoo he has on his arm that says “I am the future – the future of boxing.”

Not too many fans are convinced Schwarz is that, but then who felt Andy Ruiz was capable of becoming one big, big player in the sport’s premiere division? Looking at Schwarz’ record, there is nothing to suggest he will upset Fury – who at 6’9” will hold a four-inch height advantage over his challenger. The 25 year old’s biggest win is probably his controversial stoppage win over a then unbeaten Senad Gashi (last seen losing a wide decision to Dereck Chisora).

Gashi was tagging Schwarz with a good deal of shots until his crazy head-butt habit saw him get chucked out of the fight. That sixth-round DQ win took place last April, and since then Schwarz has won three in a row. Never has Schwarz faced a fighter anything like Fury. But then who has, upon entering a fight with Fury, ever fought anyone with his dimensions, his style and his approach?

Schwarz says it will be two fast heavyweights in the ring on Saturday night, but it seems unlikely he will be able to match Fury’s speed of hand and feet. It really is a tough job making a case for a Schwarz win (aside from his getting lucky and landing a massive punch, perhaps as Fury showboats with his hands at his sides) – but then it was equally tough making a case for a Ruiz win over Joshua.

“This is heavyweight boxing,” Schwarz said. Indeed, and anything can happen.