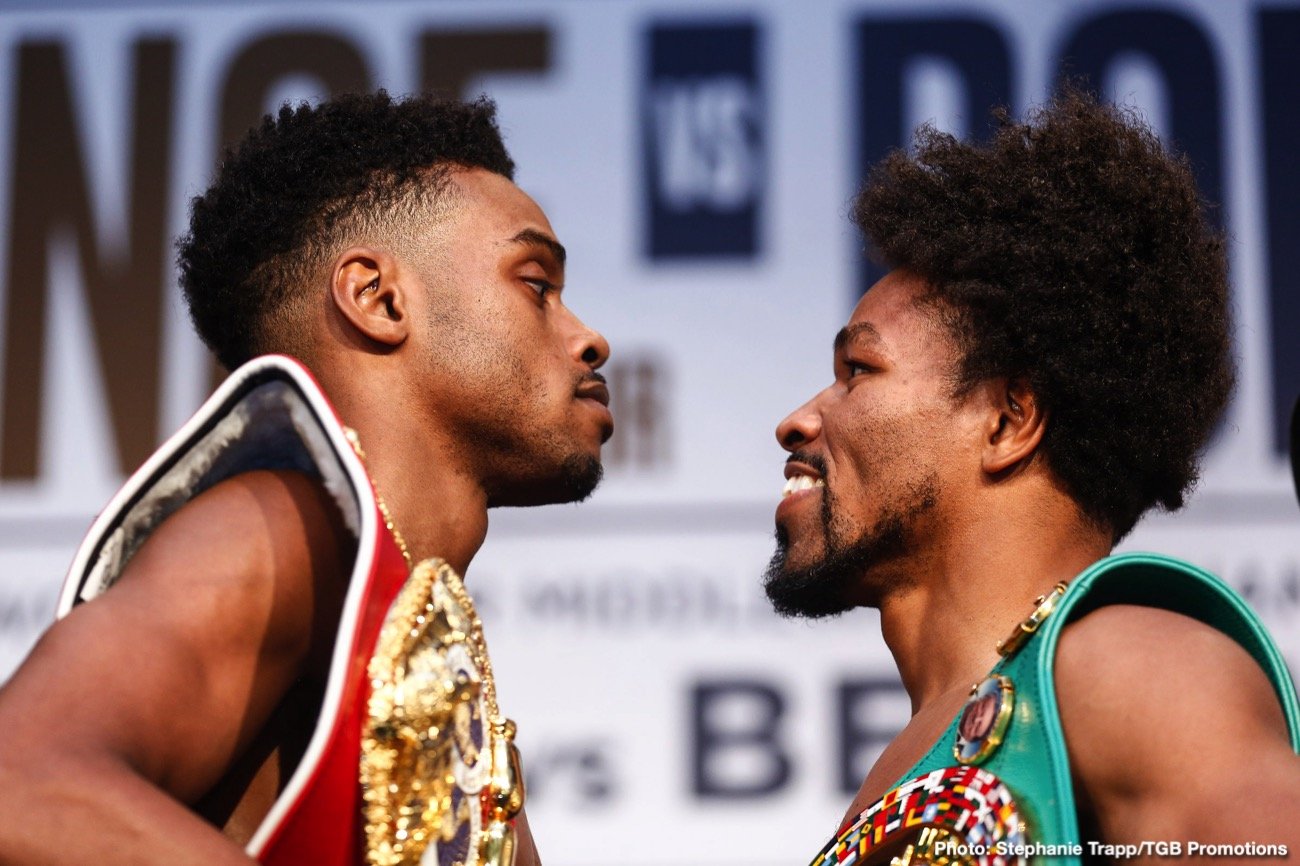 Former unified welterweight champion Keith Thurman says Shawn Porter must take a lot of chances against Errol Spence Jr. to pull off the upset on Saturday night when these two 147-lb world champion fight at the Staples Center in Los Angeles, California.

WBC welterweight champion Porter (30-2-1, 17 KOs) must sit down on his shots, because he’s not going to beat Spence by focusing on his usual volume punching. Spence throws a lot of shots too, and if his punches are thrown with more power, he’ll win. Spence is the favorite with the odds-makers, who see him as the better fighter.

Porter wants his opponents to quit

“I’ve been watching Shawn since he was 17-years-old at 165 pounds, and he used to knock people out in that division,” said Thurman in analyzing Spence vs. Porter. “I believe Shawn has gone through evolution, and there are stages throughout his boxing career, and for whatever reason, he doesn’t sit down on his punches the way he used to. He likes output. I don’t know if he likes to use his strength and conditioning and get you in the wear and tear. When I fought him it was in the 10th round, and he was just going and going and going, and something in me said, ‘He can’t hurt you, and he can’t knock you out, but if he had it his way, he wants you to quit.’

He wants to put you under pressure, and he wants you to crumble under that pressure. But as long as you have the true heart of a warrior, and as long as you’re a real champion, you’ll be able to stand up to what Porter brings out. Kell Brook did it, I did it, and I think Errol Spence will be able to do it. He tries to make you uncomfortable. As long as you are comfortable, then you take away his strong points,” said Thurman.

The question is how long can Porter stay on the inside and match Spence punch for punch? Porter’s defense isn’t good enough for him to get out of the way of all the shots that Spence is going to be throwing at him. If Porter is forced to take as good as he gets, that might be a losing proposition for him.

Shawn won’t run over Spence like he did against Malignaggi

“I think Shawn needs to do everything within his power in using head movement, keeping his hands up,” said Thurman. “His defense was lax against Danny Garcia, his defense was lax against [Yordenis] Ugas. His defense was on point when he fought me. He’s going to need to bring that same respect to Errol Spence, because he took big shots from Danny, and he took clean shots from Ugas. I don’t think he’s going to be able to walk in and constantly take those kinds of shots [from Spence] and walk out okay. Errol still throws more punches than Devon Alexander,” said Thurman.

“Errol is still a true welterweight, whereas Devon Alexander is not. When we watched Shawn Porter defeated Devon Alexander, and when we watched Porter defeated Paulie Malignaggi, if you put a 140-pounder in with Shawn Porter, he will get run over like a bulldozer. He did it to to of them [Alexander and Malignaggi], but he didn’t do it to me, he didn’t do it to Kell Brook. He didn’t run over Danny, and I don’t think he’s running over Errol Spence. But if he’s going to surprise Errol, it’s going to be on the inside, and it’s going to be all those punches,” said Thurman.

Much if Porter’s reputation as a wrecking ball type fighter was formed in his wins over smaller former 140-pounders in Devon Alexander and Paulie Malignaggi. Porter used his size to run over both guys, and score victories. It’s going to be harder for Porter to do the same thing to Spence, who is a junior-middleweight sized fighter. Granted, Spence would be a 154-pounder if he moved up in weight, but he’d still be comfortable in that division.

A win for Porter over Spence would be a huge shock

“He’s going to feel that there’s not a lot of power, but if he can mix up with a few of those hail Mary’s, and actually commit to hurting this guy, it would be one of the biggest upsets of the year if he were to shock Errol Spence,” said Thurman. “But you don’t leave it up to the judges, and you prove the welterweight division is a dog house. It’s anybody’s game. It was a tug of war,” said Thurman about his fight against Porter in 2016.

“There were times in the fight where I let Shawn do what he wanted to do. If you want to dominate Shawn, as Errol says he’s going to do, you can’t let him fight any piece of his fight strategy, because even if you’re trading toe-to-toe, blow-for-blow, all that inside fighting and inside smothering, you don’t know the judges’ perspective,” said Thurman.

At this point, it would be a major shock if Porter beats Spence, because so many boxing fans are writing him off. They’re not giving the 5’7″ Porter a shot at winning, because his last fight was poor against Yordenis Ugas. Before that, Porter didn’t look great in his wins over Adrian Granados and Danny Garcia. Those are guys that Spence would very likely knockout.

Spence’s body shots will be a problem for Porter

“So it’s easy for the rounds to go for Shawn Porter,” said Thurman. “I think Danny did a great job against Shawn Porter. What did he lack? Punch output. Spence is not going to lack punch output. He’s not lacked punch output against anybody to this day, and I don’t expect that to change tomorrow night. He’s undefeated at the end of the day, and there are different things that we use as measuring sticks. What’s the biggest measuring stick in this match-up? Kell Brook. He’s the measuring stick for this scenario. So when we use Kell Brook as a medium to fill out this fight, you’re going to lean toward Errol Spence.

The body shots from Spence will only be a problem for Porter if he stays in one place if he tries to mug him on the inside. Porter won’t have a problem with Spence’s body attack if he’s on the outside like he was in his last fight against Ugas last March. Porter was constantly on the move against Ugas, but he looked like the loser at the end. If Porter fights like that against Spence, then he’ll have decided that he can’t win. It would be a survival strategy for Porter to last the 12 rounds without getting knocked out. Unless the judges turn in odd scores like in the first Gennady Golovkin vs. Saul Canelo Alvarez fight, Porter will lose.

“Is Errol going to break Shawn down to the body?” said Thurman. “Is he going to be head hunting. Is it going to be boring like the Mikey Garcia fight? I think not, because I think Shawn will take risks to make this fight exciting. How exciting? How bad do they want it? This is the biggest fight of their careers. They have the opportunity on Fox Sports Pay-Per-View to showcase their talent to the whole world to try and out-perform the last pay-per-view event between me and Pacquiao. Good luck, but I’m going to watch it anyway. It’s going to be an exciting fight.

“Let’s see what happens. He’s [Porter] got to take a lot of chances, but what he really needs to do is box hard, and box smart. While he’s getting on the inside while he’s making all these adjustments in moving here, and moving here, trying to stay away from that long jab, it’s the hooks and uppercuts. Once he steps in on that southpaw jab, there’s going to be an uppercut waiting. We have not seen Shawn fight an elite southpaw of this nature, and that’s another exciting part about this fight,” said Thurman.

It’s reasonable to assume that Porter is going to need to take major risks for him to beat Spence. He can’t mug Spence like he did against Malignaggi, Garcia, and Andre Berto, because he’s too big, too strong and too rugged.