First the good news: unbeaten super-middleweight contender Edgar Berlanga is still in possession of a flawless pro ledger, the 24 year old still has some massive future to look forward to, and the Puerto Rican fighter has shown he can take it as well as dish it out. The ability to take it was shown on Saturday night, as Berlanga had to not only go through ten pretty hard rounds with a determined Marcelo Coceres of Argentina, but he also had to rise from a shock (to him) knockdown AND battle through an injury that might keep him out of the ring for a bit of time.

Berlanga suffered a noticeably bruised left elbow and Mike Coppinger has tweeted how Berlanga may have suffered a torn biceps and how his planned December 11 ring return may have to be postponed. Also, in the eyes of some harsh critics, Berlanga’s inability to get the KO or stoppage for two fights back-to-back (in his fight prior to the 96-93 UD over Coceres, Berlanga was taken the distance for the first time, this by Demond Nicholson) has shown he is not the monster puncher he was being made out to be. 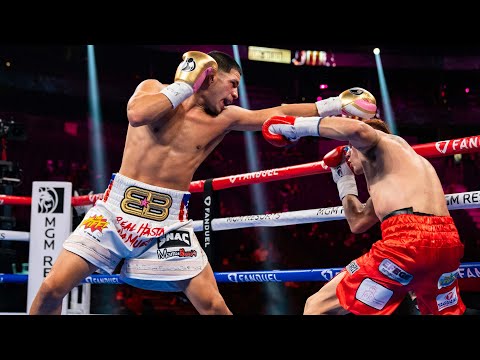 Hey, the critics can be a tough bunch. But can Berlanga – who had romped to an eye-catching 16-0 with all 16 wins coming via first-round KO – get back to laying guys out? Or, as some critics suggest, now that he has gone up a level in quality of opposition, has Berlanga, 18-0(16) found out his punching power is not what he thought it was; what we were beginning to think it was? Nicholson had been stopped before his fight with Berlanga (twice), while Coceres had been stopped just once before his duel with Berlanga.

Does the fact that Berlanga failed to get these two fighters out of there “expose” his punching ability as not being all that, or is this claim way too harsh? Berlanga did drop Nicholson multiple times and Coceres is known for having a good chin. But if Berlanga wins his next couple of fights vis decision and not by KO, the critics will, well, they’ll criticise some more.

At one point, it looked as though Berlanga might be a genuine puncher, akin to the wild man that was Edwin Valero. Berlanga may still be the real deal as far as being a genuine puncher, but right now, in the opinion of some, he has it all to prove. Is Berlanga really “The Chosen One?”

4 thoughts on “The Real Deal? Can Edgar Berlanga Get Back To Scoring Savage KO’s?”