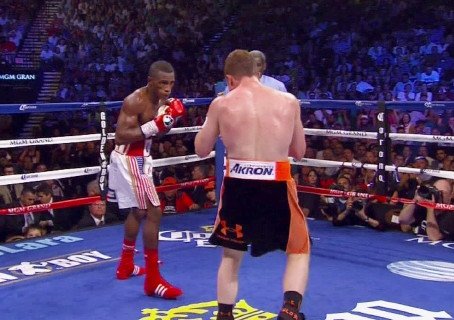 Boxing purists are a group of fans that like nothing better than to fawn over the defensive skills and ‘tactical mastery’ of fighters who most normal fans would simply describe as boring. Whilst there is nothing inherently wrong with appreciating the defensive aspects of the sport, boxing purists often look down on aggressive, come forward fighters who try to force the action as being one dimensional and lacking in genuine boxing skills.

Like a bunch of snooty College Professors they usually regard ‘lefty’ Southpaws to be inherently superior to Orthodox fighters, a belief which is as baseless as it is predictable. Purists are also some of the most vocal whiners and complainers when a close decision does not go their way and it is time their charges were rebuked.

A classic example of what I am referring to was the recent fight between Mexican hero Saul Alvarez and traditional favorite of the boxing purists Erislandy Lara. The fight was indeed close, but I scored it in favor of Alvarez by a couple of rounds because he was forcing the action and landing the more impactful shots, mostly to the body. However, after reading subsequent articles claiming that Cinnamon ‘was exposed’, ‘taught a boxing lesson’, or ‘totally outclassed’, it is time to acknowledge a simple truth about the business of boxing. You will not win a close decision in Las Vegas against the sport’s number two cash cow if your strategy is basically to avoid engaging altogether, no matter how much the purists wax lyrical about Lara’s ‘evasiveness’ and ‘rapier jab’. The American Dream back-pedalled so much during that fight that if you were to actually retrace his steps in a straight line starting from the MGM Grand, you would probably end up back in Guantanamo Cuba over two and a half thousand miles away!

This style is rightly labelled ‘Running’ and while it appeals to the boxing purists, unless it is accompanied by the offensive excitement brought by the likes of Tommy Hearns or Amir Khan, fighters should not be surprised if their arm isn’t raised at the end of the night. Purists usually counter this by claiming that P4P king, Floyd Mayweather has won several close decisions in Las Vegas most notably against Oscar de la Hoya, despite being on the back foot for most of the fight. Floyd however is a special case. He slips and rolls away from punches rather than running, and he punishes opponents with crisp counter shots rather than simply causing embarrassment when frustration makes them flail wildly. Any lack of excitement inside the ring is also more than made up for by the drama outside of it and this again reflects the business of boxing. Fighters like Erislandy Lara or fellow countryman Guillermo Rigondeaux should not expect to receive the Mayweather treatment in Las Vegas when they have less charisma than a couple of Cuban cigars and a style of boxing that appeals to the purists and not the punters.

Purists claim that the aim of boxing is to ‘hit and not get hit’ but this fallacy is the main reason they are left crying foul play when judges fail to appreciate the artistry of their man’s negative performance. Hitting and not getting hit might win trophies in the amateurs, but the aim of professional boxing is entirely different. It is simply to inflict more damage on your opponent than you receive in each round. People spend their hard earned money to see excitement and drama and want to witness a real gladiatorial spectacle. One of the reasons why so many young fans gravitate toward MMA is because organizations such as the UFC are acutely aware of who pays the bills and who is ultimately in charge of their sport. Not a bunch of snobbish purists who hold the opinion that the majority of sports fan are too stupid to appreciate the complexity of their pugilistic art. But the average American, Mexican or fan from whichever country who simply wants to be entertained.

Anyone who recalls the great bouts of the past will mention the likes of Gatti vs Ward, Castillo vs Corrales, or Holyfield vs Tyson. These were all fights which appealed to majority of real boxing fans and not the haughty purists. It is because of this that we should favor the crowd pleasing fighters of today who bring excitement and interest to the sport and not those seeking to turn it into a tactical snorefest for the sole enjoyment of a minority. Boxing is the greatest sport in the world and it is up to us the fans to keep it that way.