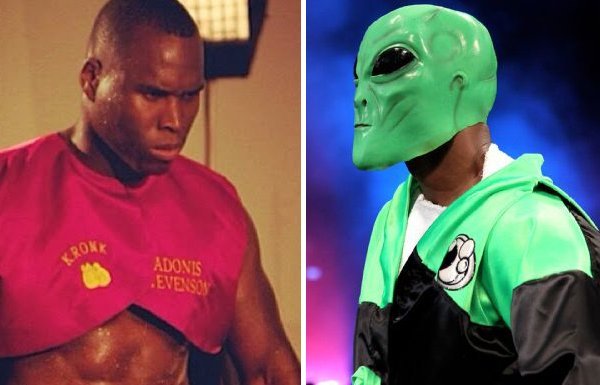 By Paul “Paparazzi“ Jones & Justin Jones – In the aftermath of Hopkins vs. Shumenov, Bernard “The Alien” Hopkins(55-6-2, 32 KOs) wasted little time in ditching his boxing gloves for his promotional hat to campaign for a showdown with Superman. That is, WBC Light Heavyweight Champion Adonis “Superman” Stevenson (23-1, 20 KOs).

“The Alien vs. Superman” sounds like a snazzy title for a forthcoming DC Universe original movie, but the potential matchup between two of boxing’s elite is a match-up that many boxing fans would pay to see.

“Stevenson, I’m coming to Canada. I’m getting my papers together,” said Hopkins.

Bhops also indicated that geography would not be a barrier to making this fight. “I’ll go anywhere they pay the most,” Hopkins said. “I’ve been in Canada. I love Canada. They’ve got a big fan base for Bernard Hopkins out there. And let me tell you something. This fight would do well at the MGM [Grand].”

A bout at the Bell Centre in Montreal, Quebec (CAN) makes logical and economic sense. Hopkins decisioned Jean Pascal (29-2-1, 17 KOs) there in 2011 to win the WBC Light Heavyweight title and the duo set an attendance record (17,750) in the process, according to Chris LaBate’s report on boxingscene.com. Stevenson has fought at the Bell Centre many times and developed a loyal following.

More important, with the disintegration of the highly anticipated Stevensonvs.Sergey “Krusher” Kovalev (WBO; 24-0-1, 22 KOs) match-up, and Stevenson’s signing with influential advisor Al Haymon, a Light Heavyweight unification bout between “The Alien” and “Superman” is the likely consolation prize for boxing fans assuming that Stevenson defeats Andrzej Fonfara (25-2, 15 KOs) in May.

Stevenson is a formidable champion who has won 10 fights in a row since being TKO’d by unheralded Darnell Boone (TKO 2) in 2010. These victories include a knockout of the aforesaid Boone and signature wins over Chad Dawson (31-3, 17 KOs) and Tavoris Cloud (24-2, 19 KOs). Superman also boasts an 83% KO ratio and was given high marks in 2012 by the late Hall of Fame trainer Emanuel Steward.

“Working with Adonis Stevenson is a pleasure because he’s my kind of fighter,” said Steward, during a 2012 interview with boxingshow.tv. “A knockout fighter. And I like punchers.”

The fact that Stevenson is a champion known for his power makes this fight even more enticing to Bhops.

“I want the hardest puncher, the baddest threat,” Hopkins said. “Because without a threat, I’m not saying [that] I ain’t motivated, but it won’t be as spicy to [the media], the history of boxing, and the fans.”

Based on Hopkins’ performance against Shumenov, it would be a mistake to discount the uncanny ability of The Alien, even when pitted against Superman.

It is doubtful, however, that Mayweather Jr. would agree to the fight and/or a weight limit above 160 pounds.

“You’ve got three people watching the same fight and get three different scores,” Bhops added. “I wonder what [the media] would have been writing if they would have given it to [Shumenov by] split decision. I shut him out.”

“I’m a Showtime fighter and I’m loyal to [them] and [Golden Boy CEO] Richard Schaefer. I’m loyal to Al Haymon, I’m loyal to this side,” said Hopkins. “So what I’m saying is, unless Kovalev comes [to Showtime] on our side, across the street [it will not happen].”

When asked whether he’d feel “incomplete” without the WBO belt around his waist Hopkins said: “If you got The Ring belt, you got the WBC, you got the IBF, you got the WBA, you are the man. Y’all know that.”

Paul “Paparazzi” Jones and Justin Jones of Eastside Boxing, both had the fight 117 – 110 in favor of Hopkins.