Rungvisai bludgeoned the 38-year-old Sithmorseng with tremendous shots in the third round, causing him to take a knee in the corner wisely. Showing a lot of courage, Sithmorseng got back up and finished the round. 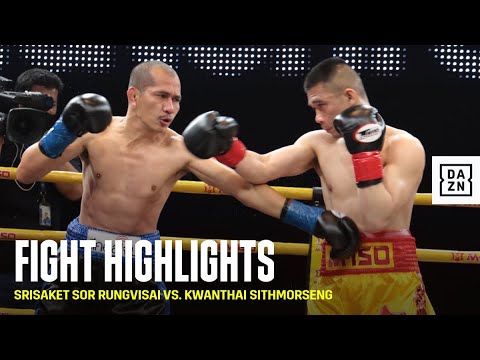 The fight was stopped after the round ended because Sithmorseng had suffered an eye injury.

Rungvisai showed no respect for Sithmorseng’s power as he walked forward the entire fight, throwing nonstop power punches to the head and body.

Occasionally, Sithmorseng would land a shot that would snap Rungvisai’s head back, but it didn’t prevent him from continuing to come forward and throw hard punches one after another.

In between rounds, Sithmorseng told his trainer that he was having problems getting his shots off due to Rungvisai’s high work rate.

He wasn’t giving Sithmorseng much of a chance to get his punches off because he had to concentrate so much of his energy on his defense to keep from getting hurt.

Even with Sithmorseng covering up, Rungvisai’s punches found their way around his guard, hitting him on the side of the head and to the body.

Rungvisai’s power was more like that of a super featherweight, and there was no way that Sithmorseng could handle that kind of power for long.

It’s a credit to his toughness that he was able to last as long as he did under the incessant bombardment from Rungvisai.

“I didn’t rush it during the early rounds because I wanted to be ready to fight the winner of tomorrow night’s fight,” said Srisaket Sor Rungvisai during the post-fight interview. “It’ll be a great fight tomorrow between Chocolatito and Estrada.

Rungvisai is the WBC mandatory for Chocolatito’s 115-lb title. Whoever emerges as the winner of Saturday’s unification fight between Roman ‘Chocolatito’ Gonzalez and Juan Francisco Estrada will be facing Rungvisai next on DAZN.

Of course, if they decide to take the fight. It would be tempting to vacate the WBC title to avoid Rungvisai, but it’s improbable Estrada, or Chocolatito would make that move. There’s good money that will be on the line for the fight with Rungvisai, and they won’t pass it up.

Rungvisai defeated Chocolatito twice in 2017, with the second victory coming by a fourth-round knockout. In 2018, Rungvisai beat Estrada by a 12 round majority decision. A year later, Estrada came back to beat Rungvisai by a close 12 round unanimous decision.

“Whoever wins will be better prepared,” said Rungvisai bout the winner of the Estrada vs. Chocolatito fight. “I want Estrada to win so I can get revenge.

“The best of luck for Estrada and Chocolatito tomorrow. May the best man win.”

Other results on Friday’s Rungvisai vs. Sithmorseng card: