Shakur Stevenson (15-0, 8 KOs) and Jeremiah Nakathila (21-1, 17 KOs) both successfully made weight on Friday at the weigh-in for their fight for the vacant interim WBO super featherweight title on Saturday night at the Virgin Hotels Las Vegas, Nevada.

During the face-off, Stevenson rudely told Nakthila, “Shut the f*** up!”

Stevenson, 23, looked strong and ready to fight today in making weight at 129.6 lbs. He’s clearly confident, not worried at all about the threat that the 31-year-old Namibian Nakathila possesses with his big power advantage.

For his part, Nakathila weighed in at 129.4 lbs, seemingly without an ounce of fat on him.

The winner of the Stevenson vs. Nakathila fight will be the mandatory for WBO 130-lb champion Jamel Herring. Top Rank, the promoter for Stevenson and Herring, wants those two to fight next.

Stevenson has other ideas, preferring to face the more popular WBC super featherweight champion Oscar Valdez (29-0, 23 KOs) for his title.

It’s less interesting for Shakur to challenge Herring (23-2, 11 KOs), who is getting up there in at age 35. Stevenson mentioned Herring’s age as one of the things that makes him a less interesting option.

Top Rank boss Bob Arum may insist that Stevenson fight Herring next, and it’s easy to see why. However, Arum has a good thing going with Valdez as one of the champions at 130, as he brings in good ratings on ESPN.

If Arum lets Stevenson fight Valdez, he’d be messing up potentially one of his money fighters if he losses. 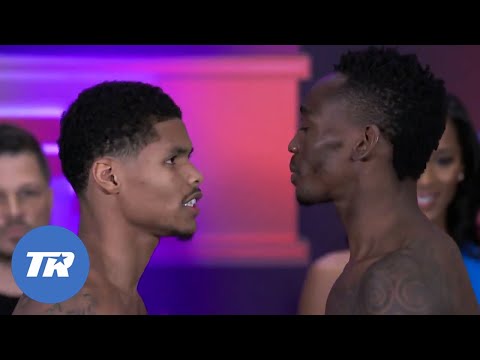 But on the other side of the coin, if Valdez knocks Stevenson out like he did his last opponent Miguel Berchelt, he would wind up as a mental basketcase afterward.

A loss at this early point in Stevenson’s career could destroy his self-confidence permanently, especially if it’s a bad loss like the one Berchelt suffered against Valdez.

Shakur took his loss to Cuban Robeisy Ramirez really hard in the 2016 Olympics, with prolonged crying while the network was trying to interview him.

That fight was close enough to where Shakur could say that he should have won. That obviously made it easier for Shakur to digest the defeat.

But if Stevenson faces Valdez, he may get knocked out, and that’s the kind of loss that he wouldn’t be able to kid himself about. Instead, he’d have to face the facts that Valdez was better than him.

This version of Oscar Valdez that we saw against Berchelt would have destroyed Robeisy in the 2016 Olympics. Stevenson needs to think about that before trying to press Top Rank to let him take the fight with him rather than Herring.