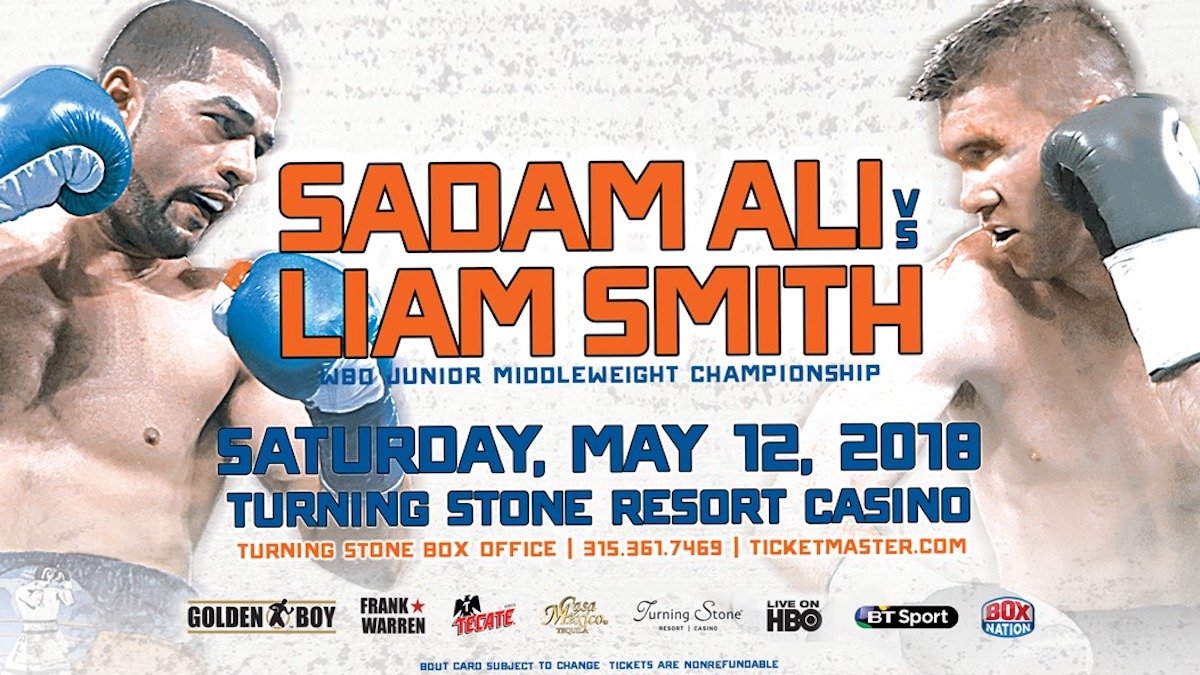 Sadam “World Kid” Ali (26-1, 14 KOs) will defend his WBO Junior Middleweight World Championship against hard-hitting former world champion and No.1 contender Liam “Beefy” Smith (26-1-1, 14 KOs) in a 12-round main event at Turning Stone Resort Casino in Verona, N.Y. The event will take place Saturday, May 12 and will be televised live on HBO World Championship Boxing beginning at 10:00 p.m. ET/PT.

“It felt great to accomplish my dream of becoming world champion,” said Sadam Ali. “I’m excited to defend my title and to demonstrate that it is not up for grabs. Liam Smith is a great fighter and I’m sure he’ll be ready, but so will I.”

Smith, the first of an impressive stable of brothers to win a world title, is a 29-year-old native of Liverpool, England. After scoring 20 impressive victories as a professional, Smith defeated John “Apollo Kidd” Thompson via seventh-round technical knockout to capture the WBO 154-pound title that Ali currently holds. Smith then faced Canelo Alvarez in front of over 50,000 fans at AT&T Stadium in Arlington, Texas. Smith lost the title in an impressive show of heart and determination, and after three consecutive victories, he is ready to regain the title that was once his.

“I’m very happy that we’ve got this fight,” said Liam Smith. “I’m looking forward to pitting myself against a good fighter in Sadam Ali, a former Olympian and now world champion who is coming off the back of a good win against Miguel Cotto. I’m confident going into this fight. I know I’m naturally the bigger man, and that will come into play, especially in the type of fight that I think it will be.”

“Sadam Ali climbed onto the world championship stage with one of the biggest upsets in boxing history when he snatched the WBO Junior Middleweight World Title from Four-Division, Six Time World Champion, and Future Hall of Famer Miguel Cotto at Madison Square Garden,” said Oscar De La Hoya, Chairman and CEO of Golden Boy Promotions. “Being in the ring with a hungry fighter with a world championship belt on his resume like Liam Smith will be nothing new to Ali. Sadam will prove yet again he’s someone to watch out for in the division.”

“This is Liam’s chance to reclaim his world title,” said Frank Warren. “He’s come through two hard fights against Liam Williams to earn his shot, and he’s done what he set out to do. When he lost his belt against Canelo Alvarez, Liam said he would be a world champion again, and on May 12 he will deliver on that promise.”

Ali vs. Smith is a 12-round fight for the WBO Junior Middleweight World Championship presented by Golden Boy Promotions in association with Frank Warren. The event is sponsored by Tecate, “THE OFFICIAL BEER OF BOXING” and Casa Mexico Tequila.The fight will take place Saturday, May 12, 2018 at Turning Stone Resort Casino in Verona, New York and will be televised live on HBO World Championship Boxing beginning at 10:00 p.m. ET/PT.

Tickets for this highly anticipated matchup go on sale Tuesday, March 20 at 10:00 am ET and are available from $95 and $75 for ringside seats and all others priced at $55 and $45, plus any applicable fees. Tickets can be purchased at the Turning Stone Resort Box Office in person or by calling 315-361-7469 or online at Ticketmaster (www.ticketmaster.com).

Smith: Regaining my world title by beating Ali will set up even bigger fights

Liam ‘Beefy’ Smith is confident of regaining the world title he lost to Saul Alvarez.
Liam Smith has extra motivation to regain the world title against Sadam Ali with the knowledge a host of Americans are queueing up for unification clashes and domestic rivals Kell Brook and Amir Khan have joined the division.

With the other belts at 154lbs held by Jarrett Hurd, Jermell Charlo and Erislandy Lara, ‘Beefy’ Smith is adamant he’s the man to break the US monopoly and open up a host of options – including unifications and lucrative defences.

Smith said: “I’m fully focused on Ali but three of the champions have already mentioned my name. Hurd has already says he wants to come to the UK to fight me and Charlo and Lara both sent me messages too. I’m not even champion yet!

“All I’m thinking about is Ali because he’s a very good fighter – an Olympian with a lot of skill. I know that beating him will put me in prime position for some massive fights but just regaining my belt is enough motivation.

“I lost this title nearly two years ago and then I put in a bad performance against Liam Williams in the first fight. I righted the wrongs in the rematch but everyone knows even that isn’t the best Liam Smith.

“I’ve lost one fight and it was to one of the very best fighters in the world.”

Ali won the belt back in December with a shock victory over the legendary Miguel Cotto.

While Smith credits the current champion with a slick style, he’s quick to highlight the shortcomings exposed by welterweight Jessie Vargas, who stopped Ali two years ago.

“He got Cotto at the right time. All his birthdays and all his Christmases came on that one night because there’s no way Ali would have beaten a Cotto who was even at 75%.

“Ali has only had that one fight at light-middle and although I’m not saying I’m the biggest puncher in the world, I punch hard enough and I’m confident of holding my own early on before breaking him up in the second half of the fight.”