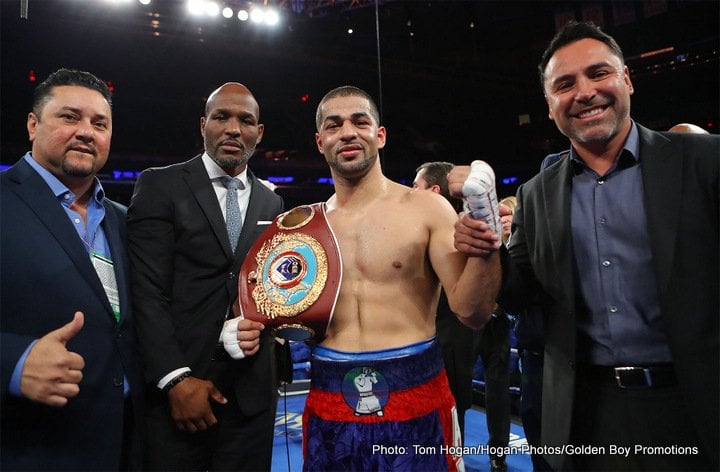 Ali said he didn’t want to get overexcited in shooting for a knockout, and end up getting caught by one of Cotto’s big left hooks. Ali said he thought if he could hurt him once, he would be able to do it again and eventually get the 37-year-old Cotto out of there. The knockout never came for Ali, but he did win a close 12 round unanimous decision pick up Cotto’s WBO 154lb. tile.

This was the grand final for Cotto’s 17-year pro career. He’s not made any noise thus far about wanting to make a comeback to try and avenge his loss to Ali. Even if Cotto does decide to continue his career, it’s going to take time for rehab his injured left biceps, which he hurt in round 7.

“I was thinking, ‘wow, I got him hurt,’” said Ali in talking about hurting Cotto last Saturday night. “I knew I had the power. Of course, I have the speed, but I know I have power too. I said I wasn’t going to jump on him crazy. I’m going to take my time. I felt like if I hurt him once, I’m sure I could hurt him again. I didn’t want to get overexcited about it and screw up everything I worked hard for,” said Ali.

In hindsight, Ali is going to need to develop more of a take no prisoner’s instinct inside the ring if he wants to be successful during his career. Letting your opponent off the hook when they’re hurt multiple times is not a smart thing to do. Had Ali lost a close 12 round decision last Saturday night, he’d be kicking himself for not trying to get Cotto out of there after having him hurt 3 times.

“I felt like I clearly won,” said Ali. “It was a close fight. Even if I didn’t, I felt like I showed who I am inside the ring. I’m grateful I got the decision. I’m really happy. I felt I had more reach and I was taller than him. He had way more fights than me in this weight class. Of course, he’s a very strong guy. I was able to catch him with some good shots. I’m blessed with speed and power as well. I did shake him up here and there in the fight,” said Ali.

Ali is too casual about the importance of finishing off a hurt opponent. Next time, Ali might not be so lucky. If he lets his next opponent off the hook, they might come back to KO him or beat him by a decision. We saw Wladimir Klitschko lose to IBF heavyweight champion Anthony Joshua after letting him off the hook in the 6th round after knocking him down. Joshua came back to stop Wladimir in the 11th round.