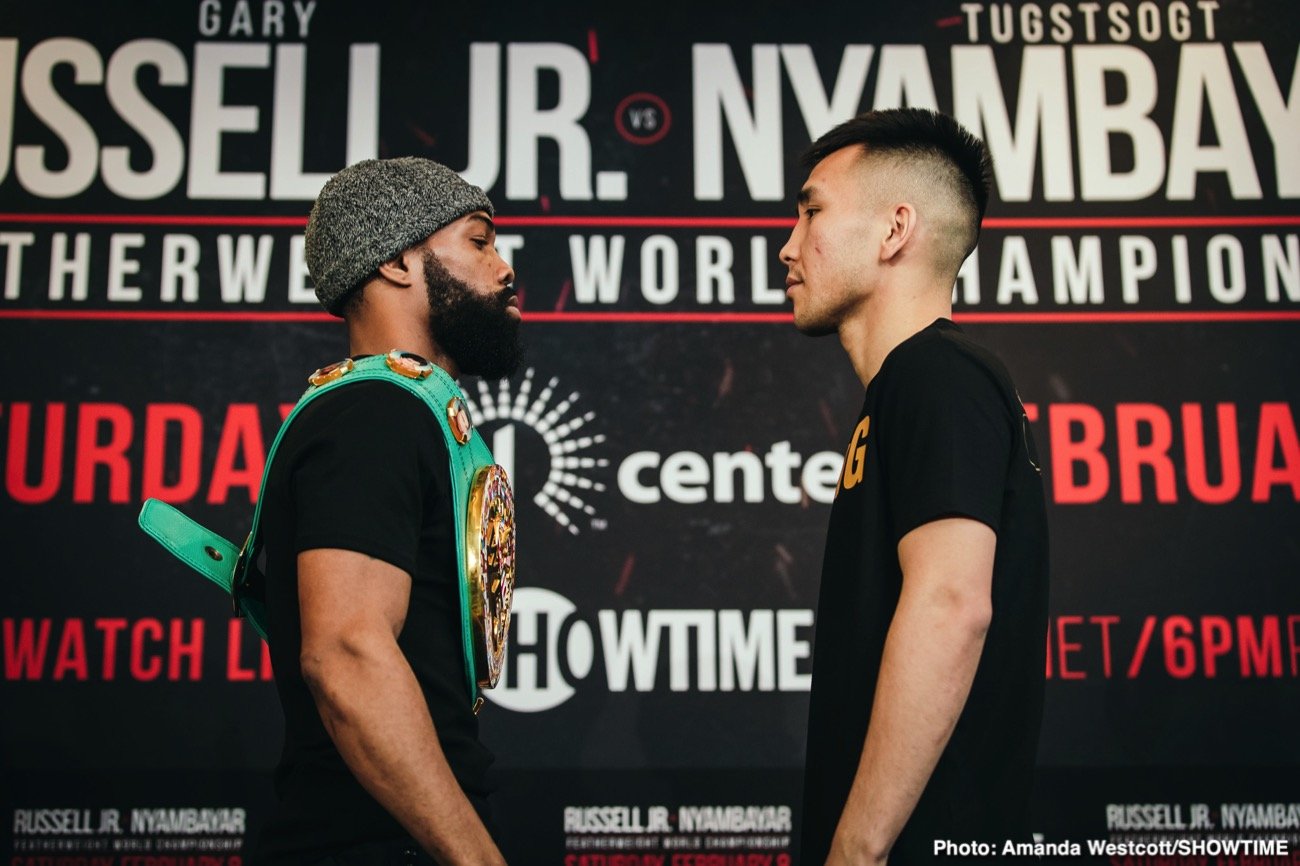 This Saturday night on Showtime, yes I did write Showtime, has an interesting bout as Tugstsogt Nyambayar the mandatory challenger takes on the WBC 126-pound titlist Gary Russell Jr. Also on the card as the co-feature is Guillermo Rigondeaux vs. Liborio Solis serving as a dipping of the toes in the bantamweight water for Rigo. Not that the main event is a 50-50 but it should give Russell plenty to think about.

Gary Russell Jr. has been mighty vocal about wanting a big fight with Leo Santa Cruz. He claims to have let the powers that be, (Al Haymon) know that it’s do or die time and he won’t be satisfied with nothing short of a unification at featherweight or a date with another champion at junior lightweight. Thiers an old saying ‘where there’s smoke theirs fire, as it pertains to this topic we could flip it to GRJ wants all the smoke but does he have the fire? For quite some time now the lighting-quick fighter from the nation’s capital city seemed to be more than satisfied to fight once a year. It’s become a running joke on boxing twitter when Gary fights being similar to a bear coming out of hibernation.

It sometimes comes up against a random mandatory or quality opponent like Joseph Diaz Jr. He comes out of the woods, generally looks great doing it because to his credit he does stay in the gym. And then its right back to sleeping until his mando is due anywhere from 9 months to well over a year.

It does suck because the guy has some real skills and is a pretty dang good fighter having just one loss on his ledger to one of the top pound for pound boxers in the world Vasiliy Lomanchenko. Maybe he’s sick of getting crap online, maybe he’s realizing he doesn’t have all the many fights left as a professional the way he tells it anyway. Whatever has gotten the fire lit in Gary’s belly this hack-of-a-scribe loves his new found attitude and demeanor.

That’s not to say he never wanted to face a Carl Frampton or Leo Santa Cruz or anyone around 126. But when you fight once a year long enough it stalls a fighter’s career for a variety of reasons. For instance, let’s say a big opportunity is coming down the pipeline but since a boxer hasn’t fought in a while in generally leads to taking care of the mando or getting a quick tune-up to be sharp and confident heading into a bigger challenge. For a guy who’s had injury issues with his hands like Gary stuff can just go wrong. So you tune up and sustain an injury, and just like that the major fight gets kicked down the street.

It does seem like Gary means business nowadays and has said that he will leave Al Haymon if he doesn’t get what he’s been promised. On to his somewhat dangerous fight that many so-called hardcore’s on social media are putting their nose to the air in disguise thinking this will be a walkover outing. Don’t get this boxing degenerate wrong this matchup is not the same as say last week when many hadn’t heard of Murodjon Akhmadaliev, after all he was the very slight favorite when the bell rang.

Don’t sleep on Tugstsogt Nyambayar based off his amateur pedigree, power, and how he’s looked in recent fights in the paid ranks. At 11-0, ‘King Tug’ has gone the full distance as he did last year versus a solid guy in Claudio Marrero, almost 10 rounds, and hit the 8 round mark once. ‘King Tug’ is from Mongolia and fights out of Los Angeles, California trained by a new face in his camp Ismael Salas. For this fight Tugstsogt Nyambayar training camp is in Las Vegas, previously working with John Pullman. The 2012 silver medalist has made a major sacrifice moving away from his family to pursue a dream of becoming a world champion. Manny Pacquiao is Tugstsogt’s idol, besides the way he throws his right hand, which kind of looks like a left hand from Manny the two are much different in strategy.

‘King Tug’ fights at a measured pace and will do that here for at least a few rounds as will Russell Jr. For those expecting fireworks quickly you will probably be disappointed, but once the feeling out process is complete we should get a fun game of high speed chess. Nyambayar has competent footwork with the ability to counter punch and land clean with his right hand. He’s a fighter who will work on the outside but once comfortable will attack and look to do damage with his power shots. Can he deal with Gary’s hand speed will be the first and obvious question? Timing can beat speed so I don’t think he will be lost when it comes to making his shots count even after a flashy combo by Russell Jr.

Distance will be a key for both men as they try to get within punching range of one another. Nyambayar doesn’t normally have that effective of a jab but he does you faints to set up his straight and quick overhand right. He will also turn his right hand into a quick upper cut in the blink of the eye. Gary can make adjustments in the ring and even mid-punch, he’s able to re-direct his shots to find an opening. When Nyambayar lands something heavy on his opponent and the reaction causes hesitation momentarily, that’s when his rapid fire combinations adding the left hook in reminding us of PacMan.

This boxing podcaster sees a hunger in Nyambayar that will equate to the closes fight for Gary Russell Jr. in a long time. The only other fighter to even remotely bother or trouble GRJ was the great Lomachenko. If you like skills and speed from two guys that can crack some, this is the fight for you. It may be in only minor spots during the rounds but this will be a very competitive bout. Being off for over a year will hamper Tugstsogt and likely be a difference maker. Whereas GRJ is used to long layoffs and for him fighting last May is a normal thing. Whether we get a barn burner on the cards or say an 8-4 victory, we should find out more about both of these boxers.

My Official Predictions is Gary Russell Jr. by Majority-Decision.

Side note: The co-Feature is Guillermo Rigondeaux vs. Liborio Solis as Rigo gets comfortable with 118. Also, prospect Jaime Arboleda vs. Jayson Velez opens the card for Showtime. Keep an eye out for Kid Galahad vs. Claudio Marrero on DAZN as well.