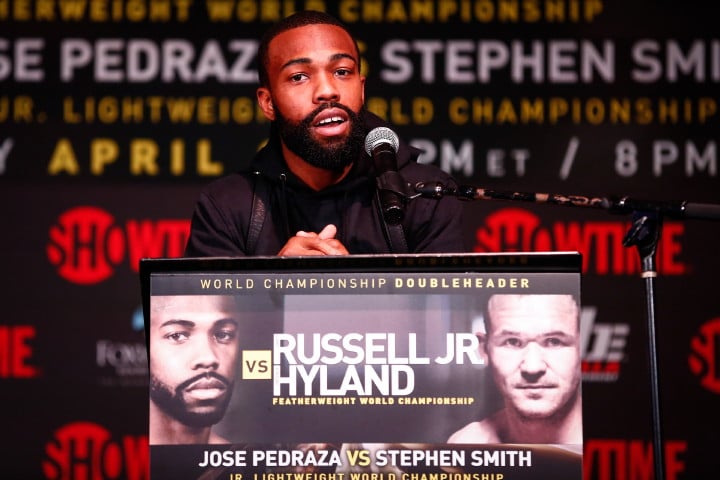 Here’s what the fighters had to say at Wednesday’s final press conference.

(On Patrick Hyland…)
“First and foremost, I gotta tip my hat off to him. I heard him say he was being trained by his father. Me and my younger brothers are also trained by my dad. My father is my favorite superhero, so it is very hard to deal with a situation like this and to bounce back and to grind and put all the hard work and effort into it after all the heartache and loss, I gotta tip my hat off to him for that.

I know that anytime you have a fighter that trains for six to eight weeks and prepares for no one else but you, is a dangerous fight. He’s tall, he’s long, but we can take him. We’re going to handle it.”

(On returning from injury…)
“I feel good. I’m ready; I put the work in at the gym. Like I said earlier, I got cussed out several times and sometimes I left the gym feeling like the worst fighter ever. But, right now, we’re ready and we’re prepared to invest in my ability.” 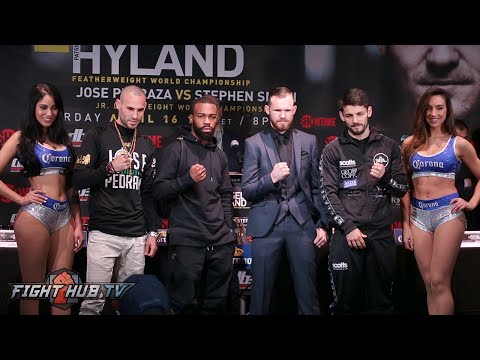 (On what it means to have his brother Antonio on the card he’s headlining…)
“It means a lot. I’m looking forward to it. I’m actually more looking forward to watching my brother compete than my own fight. I will definitely be working his corner in that fight. It means a lot for us to be able to pass this information down from generation to generation and watch it grow and watch us build as a family and as a unit. It’s amazing.’

“He definitely has the potential to be the best. Him as well as Antuanne, who is now on the 2016 Olympic team. It’s all information passed down from generation to generation. I feel as though they definitely have the ability to be better than me. I would want them to be anyway.”

(On what he needs to win the fight…)
“I need to maintain control of the fight, close the distance and maintain the jab. Complete dominance; I want to touch the body early. He likes to move a lot, so we’re going to cut all that down.”

(On potential future opponents…)
“God willing, everything goes right come April 16, we would love to unify with Lee Selby. If I had my choice, I would go with Lee Selby first to unify. Immediately after that, I want Leo Santa Cruz and after that I need Lomachenko.

“I don’t care where [Lomachenko] moves. He can lose his next 10 fights, but before my career’s done he has to see me.”

(On what gives him the sense of satisfaction in boxing…)
“To fight for the WBC title is everything I’ve dreamed of since I was a kid and all of the hard work that I have put in to get to this position to fight for it. I am happy and I am just living for it now for Saturday night.”

(On Gary Russell…)
“I know he’s got fast hands. He’s a great southpaw and a great boxer so I have to be at the best of my ability on Saturday night for that. I worked on a game plan in the gym to counter his hand speed and it all has to come together on fight night. I can do all this and say all that, but I just have to perform on Saturday night and put it in by doing everything I’ve worked on to become champion.”

(On training camp…)
“I am feeling really good, we’re in the last stretch of conditioning. It was a very long and intense training camp but we saw improvements in my abilities. I have been waiting a long time for this day to come and we are going to demonstrate to Smith that I am a weapon.

(On Stephen Smith…)
“Smith is a very good boxer, he has a lot of abilities and intelligence. He’s a boxer with very good defense, but we already utilize a variety of strategies to be able to neutralize all of his abilities.”

(On what he plans to demonstrate on Saturday…)
“With my abilities, come Saturday, I will demonstrate that I am above Smith and that I am at the level of what I am, a champion. Overall, I just want to put on a show and I hope that the fan base will enjoy this great card.”

(On what he learned from fighting Edner Cherry…)
“I learned what I have always said and what I have always done to this very day, which is never watching. I never watch too many videos of my opponent because on the day of the fight he could be a completely different fighter and I think that is what occurred then. Aside from that, he utilized a great strategy.”

(On his thoughts on other Puerto Rican boxers…)
“Actually I am a world champion just like Rocky Martinez; there are many Puerto Rican prospects. Like [Felix] Verdejo but I don’t consider him as a world title contender just yet. He hasn’t fought with a boxer of championship caliber but he is currently among the top fighters in Puerto Rico.”

(On other fights he may be interested in at 130 pounds…)
“I have always said that the less Puerto Ricans I fight, the better. If it is the last option, I will fight with Puerto Ricans too but aside from that Rocky [Martinez] the world champ, there’s Francisco Vargas, [Javier] Fortuna, to name a few that are at the top of my list.”

(On his first time fighting in the U.S….)
“I’m excited. If you want to make a name in boxing, then you’re going to do it in the states and that’s what I plan on doing by becoming a world champion Saturday.”

(On what he knows about Pedraza…)
“Well, not quite a lot. I know his name from the amateur days. He’s well established, he’s an Olympian and he’s a talented man. To fight somebody consists of winning or not, it goes beyond tactics, beyond style and beyond skillset really. I believe I have what it takes to fight anyone and nothing will keep me from becoming a world champion.”

(On what he needs to do to get the victory…)
“It can be a different type of fight; we know he likes to switch it up and box from different stances. He’s obviously talented so it’s going to take a different set from each way but we know what to expect. I’ve gone over everything with my trainer Joe Gallagher and we’re ready to go.”

(On his brothers Liam and Callum being champions and what it could mean to potentially join them…)
“It’s special. Two weeks ago Liam and Callum won a European world title and it just gives me the confidence, the spirit to hike. I’m in a really good place mentally and I couldn’t be feeling better going into it. After my boot camp going successfully, it just makes you feel better going ahead to become a world champion.”

(On UK champions on the rise in the past year…)
“There’s a lot of history there and for myself and my family, so we do what we’ve always wanted to do and we’re looking to just keep moving forward.”

(On training camp…)
“It was good. Obviously it boiled up to Callum’s win. There’s a good momentum. Callum and then Stephen has his world title opportunity. It’s been a slow burning rise with Stephen but he’s got, as I call it ‘his World Cup final’ — something that is going to take heart and strength. His strength is going very well. Pedraza is a very good fighter, good orthodox, good southpaw, he can mix it up and we’re prepared for whatever style he wants to bring on Saturday.”

(On the process of preparing for a fighter like Pedraza…)
“It’s a nightmare. It’s hard enough when you’re fighting a quality orthodox or a quality southpaw, of which he is, but not only that. He can also box on the back foot and on the front foot so we’re varying sparring partners, we’re mixing up the sparring in between the rounds, switching stances, and whichever way Pedraza wants to fight at the end of the night, I’m sure we’ll have an answer for.”

(On how he feels the fight will play out…)
“I think that’s all up to Pedraza, looking back at a few of his fights, he boxes slow and gets off to a good start but then he seems to lose his way a little in rounds. When you watch him against [Andrey] Klimov, he started out very well, put him under manners very quickly and had him nearly beat by the fourth round but [Andrey] managed to stay in very well and boxed really well. He got to the middle rounds, lost his way a little bit, switched southpaw, so either way it’s going to be fascinating. We’ve just got to make sure we don’t get caught to early when he’s quick and he’s sharp and he’s trying to put manners in Stephen Smith and then take him into the deep waters like Edner Cherry.”