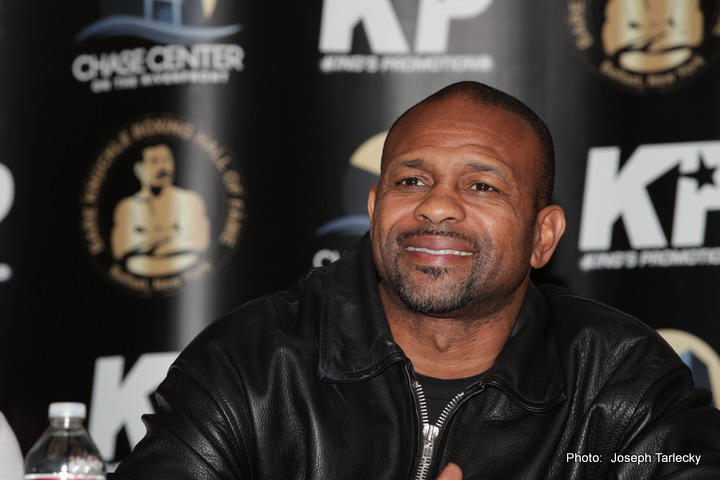 One of the greatest careers in ring history will come to close this Thursday night, when the legendary Roy Jones Junior competes in his final bout as a professional boxer.

Widely considered one of the very best pound-for-pound fighters of all time Jones, 65-9 (47KOs), competes in cruiserweight (200lbs) bout vs Scott Sigmon, 30-11-1 (16KOs). The 10-rounder serves as the main event to a five fight Island Fights main card which features both boxing and mixed martial arts bouts.

The event will be live-streamed and available on video-on-demand basis exclusively on UFCFIGHTPASS, the UFC’s digital streaming service.

Joining combat sport play-by-play veteran TJ De Santis in the commentator booth will be Jeff Lacy. Known as “Left Hook” during his boxing career, Lacy represented the United States at the 2000 Olympics and went on to win the same IBF super-middleweight title Jones had annexed a decade earlier. Lacy also fought Jones in 2009 (the entire fight is available on UFC FIGHT PASS) and will bring a wealth of knowledge to the event.

ON FIGHTING ON UFC FIGHT PASS

“This is the first live boxing on UFC FIGHT PASS. I love being the first to do something, so to be the first boxing event on UFC FIGHT PASS is cool. When I turned pro back in 1989, I said I wanted to bring new audiences boxing and that’s what I tried to do. By having my last night as a fighter on the UFC’s (streaming service) I’m bringing new eyeballs to boxing and I’m throwing a spotlight on the boxing and MMA fighters who are on the event.

“I’m been a fan of the UFC for years. Me and (UFC President) Dana White have been friends for a long time, since before he even got started with the UFC. We’ve talked about FIGHT PASS showing a fight (of mine) and it has come about perfectly.”

ON HIS FINAL FIGHT

“It feels different. I’m emotional even thinking about how I’m going to feel on the day. I’m almost tearing up talking. I’m worried about how I am going to feel all day of the fight. I may be crying all day – but once I am in the ring I’ll have to put those tears away because there’s gonna be a guy in the other corner looking to beat me. Scott Sigmon won’t care about those tears. He cares about getting the win, that’s the reality.

“I turned professional in May 1989 in this same arena, but I’ve been doing this since 1979. In 39 years there’s not been a single day where I didn’t put on glove, skip, watch tape or spend time thinking about boxing.

“Boxing has been my life and it is my life. I’ve enjoyed every moment of it. So much of it is still fresh (in my mind), not one thing but so much jumps out when I look back… representing my country at the Olympics in 1988, becoming a world champion for the first time, becoming the No.1 pound-for-pound vs James Toney, winning the world heavyweight title… like it was all yesterday.”

“I’m not sad to get older, we all get old. I had a great prime. I was good in my prime, y’know? I wasn’t surprised that I was getting old, and that my abilities were getting more limited. Everybody knows everybody gets old, but I think some guys really don’t think their body will get old.

“I accepted it. People told me to retire but I knew what I could do and I’ve never let anyone tell me what to do.

“There are things I wanted to accomplish that I knew were no longer within my reach. I love boxing, even out of my prime I love boxing like I did when I was champ. But you can’t go on forever no matter how much you love it. It’s time, I’m ready to say goodbye.”

Vs Bernard Hopkins, May 22, 1993, wins IBF middleweight title on points

“It was a good fight for my first world title. The thing about that fight was I just wanted to make sure I stayed smart and I stayed focused because one of the first goals in my life was to turn professional and become a world champion. I felt a lot of pressure on my back because this was what I’d worked so hard to do for all those years. I fought the fight with one hand due to injury, but I did what I needed to become world champion.”

“Losing my undefeated record the way I did (on a controversial disqualification five months earlier) was really bad for me. Y’know, even though everybody who ever saw that thought it was wrong, my undefeated record was still gone. Done. They took my “and 0” away and there was no getting it back. So the second fight came and I made sure to prove who was the better fighter.

“It wasn’t personal. I don’t blame the guy, he didn’t decide to disqualify me for nothin’. It was a life lesson, that’s life. But I made sure nobody would ever think he was a better fighter than me in that rematch.”

“I wanted to be a world champion my whole life but I never once thought of the heavyweight title until it presented itself. This was something that God gave me, way and above more than I ever asked for or expected. It was the chance to make history, to do something nobody would dream of me doing.

“This was history, the first fighter to jump from middleweight to win the heavyweight title in over 100 years. John Ruiz had no clue what he was dealing with or what he was facing. He found out the hard way.”

“The great thing today is it don’t matter what anyone says or what anyone writes, you can type “sickest boxing highlights” into YouTube or Google and you see Roy Jones Junior doing this thing. Nobody can change your mind after you see that. That is pound-for-pound! I did what I did – it happened – it is a fact.

“Nobody else comes close. You can watch me side-by-side with anyone and it’s not close.

“In my prime, I was the ruler. Simple as that.

“I understand there’s a lot of great fighters who’ve followed me already since I was the champ – and I hope there’s another who comes along does even better because want to see that – but I haven’t seen anyone do what I did yet. I haven’t seen anyone turn pro at 154lbs and win the heavyweight championship of the world.

“Even the great Sugar Ray Robinson, the pound-for-pound guy that he was, couldn’t win the light heavyweight title after turning pro as a welterweight. He had a difficult time trying that. So that tells you how hard it is to jump up that kind of weight and win.

“So, pound-for-pound the greatest of all time? It isn’t hard to figure out, Roy Jones Junior is your king of the hill.”

On This Day In 1995: The Legendary Manny Pacquiao Goes Pro929 Total Shares